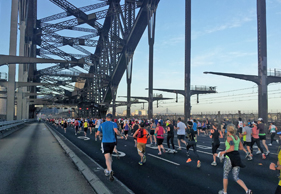 We flew into O.R. Tambo Airport
around 5pm on the Wednesday with about five hours to go before our flight to
Perth, but when we arrived at check-in, we were told that we couldn’t board due
to some totally unforeseen problems with Alexis’ passport. The SAA staff were
extremely helpful and courteous, but alas, nothing could be done, so we
resigned ourselves to several drinks and a missed opportunity… However, with
the help of everyone involved, we formulated a plan of action and we awoke with
renewed vigour to get the paperwork in place for us to make the next flight
that evening, and thanks to the incredible heroics of Jenny Kearney of Modern Athlete, as well as SAA and
Quantas, we were able to head ‘Down Under.’

Having
arrived in Sydney, we woke up mega-early in anticipation of our trip to the
race. We stayed in a beautiful area called Manly Beach, which north of Sydney, across
the river and along the coast. The race organisers anticipated runners relying
on public transport to travel to and from the race, so our race entries
included multiple day-passes for the bus, ferry and train – all we had to do
was show our race bibs to the drivers. It was incredibly well organised, and we
also knew exactly which buses to catch because we met a bunch of Aussie runners
huddled under the bus stop, chatting excitedly about the race.

They
were so excited that we had won a trip to Australia, and that the focal point
of the prize was the race! We were introduced to everyone as “the South
Africans who came to run the race,” and everyone wanted a photograph with us! Interestingly,
it does not matter where you go, runners talk about the same things: Training
stories, previous times, predicted times, diet the night before, diet on the
day, stretching, clothing, hydration, and so forth. It sounded just like the
typical pre-race banter in South Africa.

We arrived at the start with thousands of runners
streaming in. The sun had started to rise over the city and the view was
absolutely spectacular from under the Sydney Harbour Bridge, with the Opera
House and end point of the half marathon clearly visible across the river. We
were ready to run!

On
our way to the start, we met up with a young student who had entered the Sydney
Half Marathon as her first half. She and I were starting in the same pen and we
decided to run together, because she also wanted to run a sub-2:00 time. The
climb at the beginning was quick and easy – all I could think about was how
most South Africans would laugh at that ‘hill,’ because if you have run
Southern Cross, or ‘Moerse Bult’ at Niel Joubert, then you would hop and skip
over this – and suddenly we were on the bridge. They had closed the bridge for
us, and it was quite an experience to run under the steel lattice with the
river beneath you. This was what
running was about!

We
ran through a number of districts, and at one of the hairpin turns, the winner
came flying past us like a bat out of hell, but much more
graceful. I saw Alexis twice during the race. The first time, he looked quite
cheerful, and he smiled while he waved at me. But the second time, he did not
look pleased, and he waved his hand like a guillotine across his neck,
indicating that he was kaput.

There
were so many supporters lining the final stretch along the waterfront and I
heard someone yell, “Go Celtics,” but judging by their accent, I suspect that
they thought I was running for some Irish club. Then came the memorable finish
at the foot of the Opera House steps, across the river from the Harbour Bridge,
which we had crossed only two hours earlier, and next to the Opera House sprawled
the Royal Botanical Gardens, where our medals were handed out. Running this
race was definitely the best way to tour the city!

I
started off running at a relaxed pace, enjoying the sunrise over Sydney Harbour,
listening to the runners breathing heavily around me as we went over the first
hill and headed for the Harbour Bridge section. I felt the jetlag setting in
and immediately knew that it was going to be a long morning (and mourning) for
my legs. Soon, we had crossed the bridge and were heading down the highway
towards the city. Beautiful skyscrapers all around us provided some much-needed
shelter from the sun, which had begun to bake.

As
we made our way through the Financial District, the wheels came off and as much
as I struggled, I just couldn’t find a rhythm. I resigned myself to
power-walking and taking as many photos as my battery would allow while
chatting to the other ‘stragglers’ around me, but as we entered the final 2km,
my spirits were lifted and I started to make a run for the finish. With the
Opera House in sight and the hordes of supporters cheering us on, it was
impossible to not feel a sense of elation.

As
we were making our way along the promenade, my calf decided it was time to spaz
out and I was forced to stop and stretch it out every few metres. A mere 400m
from the finish the other calf joined the party, and I was in pretty bad shape.
With thousands of onlookers and a pained grimace on my face, I tried to get my
mutinous calves to play along. I started walking to test them out and as I
broke into a run, the crowd of supporters in the coffee shops and cafes of the
waterfront cheered. I felt like Rocky Balboa at the end of a movie montage –
nothing was going to stop me now! My calves cramped all the way to the finish,
but what an incredible ending to an incredible race.

Sydney’s
beautiful skyscrapers intermingle gracefully with centurion buildings, heritage
sites and parks – imagine New York City mixed with Cape Town, but minus the
rubbish and car guards – and the people are so friendly. During our stay, it
seemed like the city never really slept. Whether we were wandering around at
10am in the morning or 10pm at night, there were always hordes of people moving
through the streets, and it was interesting to experience the multi-cultural
mix of English, Japanese, Korean, Tamil and many other languages.

We
crammed in as many tourist activities as we could, but there is so much to do
in Sydney! We visited the museums, Opera House, parks, markets and aquarium,
and we even managed to slip away to the beautiful Blue Mountain Reserve for a
day. It was an exciting journey to a beautiful city. Thank you so much, Modern Athlete, for affording us this
opportunity of a lifetime!