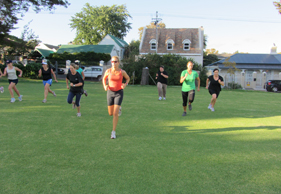 It all began when Ingrid Ross drove to the Sports
Science Institute in Newlands, , looking for help with a niggly injury. “I was
recently 40 and needed a podiatrist, so I drove across town from Blaauwberg,
where I reside with my husband, toddler, dog and business as a swim instructor,
to seek out sound medical advice, for whatever the ailment.” (It turned out to
be ill-fitting running shoes.)

“So there I was at the lift, glum and bored with life,
staring at myself in the reflection of a man’s sweaty bicep and holding myself
up with the last drop of caffeine from that morning’s overdose, when an
advertisement caught my eye: Tri-Fit Entry Level Triathlon – Ladies only! Eight
weeks to your first triathlon. I can totally do this, I thought. In fact, a
little escape from my current reality was just what I had been looking for. One
new pair of running shoes later and I was signed up and ready to go.”

In pursuit of her new goal, Ingrid found herself doing
three training sessions per week at the institute and another three sessions in
her own time, with one rest day a week, which she lovingly describes as a virtual
oasis of horizontal bliss. “My toddler turned two and hurtled through the
house in search of me. My husband, now a tri-fit widower, started e-mailing me as I rushed from
one training session to another, leaving dinner instructions pinned
strategically to the fridge with feeble little hearts and fibbing IOU’s.” But
her build-up to that first tri was going smoothly.

“I would love to say, ‘Long story short, I finished seventh
out of 500 entrants, lost 12 kilograms, I’ve left my job as a swimming
instructor, and you’ll see me on the cover of next month’s FHM!’ Sadly, I fell ill
the week before the triathlon and was unable to compete, but I can honestly say
I
would have managed the swim without being taken by a giant alligator preying on
flailing legs and aquatic fatigue, I would have easily completed the cycle
without permanent damage to my pom-pom, and I would have breezed the final run,
because I had been well trained. My journey of change,
however, was none of the above.”

Ingrid says it came to her quietly, over a couple of
the training sessions. “I realised that I wasn’t nearly as swimming fit as I
fancied myself to be, the mountain bike ascends in
left me eating dusty humble pie,
and the hill running in left me clutching my
last drops of sweaty sanity as they slid down my back. But then it happened. I
stopped drowning. I embraced the dark waters of Silvermine Dam and shivered
with glee as the cool air kissed my strengthening body. I sped up on the
downhills and laughed aloud at the mountains around me. I broke past the 10km
mark in running and sprinted on to an imaginary finish line of emotional
freedom that far exceeded the physical boundaries I had pushed.”

As Ingrid puts it, her life-lesson did not come in the
form of a medal or a size 6 waist, it came in the realisation that it’s okay to
ignore a few e-mails and call in the babysitter in order to go for a run or
squeeze in a long swim at the gym. “My business steamed on in the background. My
husband managed to buy milk. My child’s first long sentence became, “Mommy
running with mommy friends”. And of course the dog, he’s still with us – alive
and well.”

“Sometimes you will be Supermom and sometimes you will
not. That’s okay. And I’m better at being okay because of it. I did not summit
mountains, I didn’t cycle the Tour de France, and I certainly did not swim icy
oceans, but I did get off my hamster wheel. And that was my real goal in all of
this.”