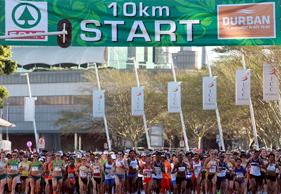 Ren? Kalmer galloped to an easy victory in the
third of the Spar Grand Prix Series of races for 2012 in Durban, crossing the
line in 33 minutes and 25 seconds, a full minute ahead of her second-placed Nedbank compatriot
Rutendo Nyahora of Zimbabwe (34:26), with another clubmate and defending race
champ Irvette van Blerk coming home third in 34:39. Having already won the
first two legs of the series – in Cape Town (32:50)
and Port Elizabeth (33:30) – Ren? is now well in control of the Spar Grand Prix,
and this win further extended her remarkable Spar record to 26 race wins, with
14 of them sub-34.

She was never under pressure in Durban and pulled
away from her rivals after 3km, but admitted after the race that it was still a
tough run, given that the race had moved back to the Sahara Stadium, Kingsmead, and the
route had been changed as a result. “I found
the route quite tough. I had hoped to beat last year’s winning time, Irvette’s 32:50,
but those last 5km were hard going. Last year I had to pull out with ITB problems,
so I was very happy to come back and achieve such a positive result. I am very
happy with the win.”

Besides the
new course and venue this year, the 2012 race also introduced the SPAR Women’s
Lifestyle Expo at Suncoast Casino and Entertainment World. A highlight of the
race was having all three women selected to run the London Olympic Marathon in
August in the field, and then to see all three come home in the top 10, with
Rene first, Irvette third, and local favourite Tanith Maxwell ninth in 35:42. Rene
said the Spar races were really helping with her London preparations,
especially to build speed: “I battled last year because I had just started my
marathon campaign, but this year I am really enjoying running the SPAR Grand
Prix as it helps with my focus for London.”

Tanith was also
first home in the 35-39 age group, and said “The atmosphere at the SPAR race in
is
always amazing! I found the new course really tough, so maybe it was just a bad
day for me, but Durban SPAR always attracts the top athletes from around the
country, so it gave me a solid workout towards my marathon in London.”

The Durban race
attracts young and old alike, including regular entrant Bets Lubbe, 70, from
Amanzimtoti, who ran it for the 18th time this year! Twenty years
ago, she says she realised she wanted to get healthy, so she stopped smoking
and entered the SPAR race, and it has been on her calendar ever since! She ran
her first back in 1993 and has only missed two races since. “It is such a fun
day and you enjoy every second of it. In the beginning I took it very seriously
and I was very competitive, but recently I’ve just been enjoying them. I used
to run them, but since 2000 I walk them,” she said.

Modern Athlete reader Desiree Casey
Jagarnath also enjoyed her SPAR race, finishing in 1:07. “I didn’t feel like it
the night before, as I felt that nasty feeling of a cold trying to take over my
body, but it was my first 10km race in about a year and a half, so I felt like
a winner and I admit I was a tad bit emotional! It was an awesome race!”