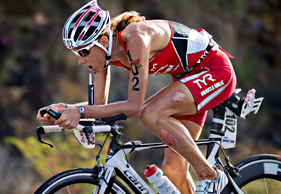 “Never in a
million years did I imagine that I would become a professional sports person!”
says Chrissie, “I have taken a rather unique path to professional sport. I
didn’t grow up like many other triathletes watching Ironman on TV and wanting
to qualify for the World Championships in .” In fact, Chrissie started the sport
in 2004 on a borrowed bike and wearing an old wetsuit that was too big for her,
but having just worked in
for 16 months, where she cycled to work every day and explored the countryside
on her bike, her fitness was already up there. “I didn’t do any structured
training – just grinding up and down the hills was enough to make me super
strong!”

In 2006,
Chrissie went back to the
and entered a few triathlons and amazed everyone, including herself, by winning
the Shropshire Olympic Triathlon and qualifying for the World Triathlon
Championships in . She quickly hired a
coach, trained solidly for 10 weeks and managed to win her first amateur title,
beating her nearest rival by four minutes in 2:17:32. “I seriously couldn’t
believe what I had achieved! Then I had to decide whether or not to take the
risk, give up my job and have a go at professional triathlon. I just knew I
never wanted to look back and think ‘what if’.”

So in 2007,
Chrissie gave it all up to become a pro triathlete, but was still only thinking
of doing the short-course Olympic distance. “I didn’t actually know anything
about Ironman, other than that I thought you had to be crazy to do it! But my
coach suggested that I do Ironman
in 2007, and I won it in 9:54:37 and managed to qualify for the World Ironman Championships
six weeks later in .” Much to her surprise, Chrissie
grabbed her first World Champ title in 9:08:45 – the only athlete, male or
female, to have done that in their first year turning pro. She then won the
next two years as well, to become only the third women to have achieved three
consecutive victories in Hawaii, the other two being Paula Newby-Fraser and
Natascha Badmann.

However, she
describes her fourth World Ironman Championship title in Kona last year as the
pick of the bunch. Despite starting the race with a torn pectoral muscle
resulting from a bike crash two weeks earlier, Chrissie was still determined to
prove herself. “I dug to the very depths of my soul and truly pushed beyond any
limit I thought existed,” she explains. “It was the hard-fought race I have
always dreamed of, and I feel that maybe at this race I proved to myself, and
others, that I really was truly worthy of being called a champion.”

Chrissie
visited this country on two occasions before her 2011 Ironman SA win: In 1999,
as a student on an adventure trip passing through , and in 2002 as a member of the UK
Government Delegation to the UN World Summit on Sustainable Development. Having
developed a fondness for the place and its people, she says her Ironman win here
was even more meaningful.

“The
course, the crowds and the final finish chute at Ironman SA truly make it one
of the best in the world. I ran down the red carpet with a new World Ironman
Record of 8:33:56 on the clock, a rainbow of confetti raining down, and a
beaming smile on my face.” Chrissie not placed eighth overall and nearly 35
minutes ahead of women’s runner-up Rachel Joyce, but also set new female bike,
run and course records, and her marathon time of 2:52:54 was faster than all of
the men on the day!

For the
champ, triathlon is a lifestyle, and she devotes every minute to her game. “I
believe that triathlon is a 24/7 job. I devote my life to it. Exercise,
resting, sleeping and eating are all part of training. It’s not just about when
you are in the pool, on the bike or running – if you forget to focus on rest
and recovery then you will never fulfil your true potential,” she explains. She
adds that consistency is key: She doesn’t rev up her training hours or mileage just
before a race; she prefers to work consistently hard, only varying her programme
slightly if a big race is coming up. She might try and hit faster times for her
1km track run reps or alternately hit the same times, but with a reduced
recovery, just to test her sharpness.

Chrissie does
six running sessions a week, including a long run of around 32km (in around 2
hours 15) and two interval sessions (one with 800m to 1600m reps, at faster
than race pace, and the second on hills). She also does a brick (bike/run
session) with a three-hour bike straight into a hard 10km tempo run, and two
steady 45-50min run sessions, on top of dedicated bike and swim training
sessions, plus she also does three to four strength and conditioning sessions
of 45–60 minutes each. “But I don’t lift heavy weights, and training also
comprises recovery, nutrition, hydration, massage, physical therapy, and the
all-important hours of sleep!”

When it
comes to food, she says she doesn’t count calories, but still keeps her intake
to about 5 000 a day when in full training. “My diet comprises lots of
fresh fruits and veggies, whole grains like brown rice, quinoa, buckwheat, couscous,
avocados, nuts and seeds. I also eat some type of meat once a day, with red
meat once a week. Biltong was also on the menu when I lived in Stellenbosch,
with a dollop of Mrs Balls on the side!” Come race day, Chrissie’s diet is also
strict: Cream of rice for breakfast and one gram of carbs per kilo of body
weight per hour on route. “Immediately after the race I crave chips, a kebab,
pizza or burgers, and tend to indulge in more than one!”

While
Chrissie has enjoyed many momentous wins in her career, there have been races
and sessions she calls “total turds.” In 2006, racing the Redditch Super
Sprint, her borrowed wetsuit turned out to be too big and water flooded in. “I
couldn’t swim and had to be rescued by a kayaker. Game over!” Injury and
mishaps are all part of the game and she’s happy to have overcome instead of
giving up. “Successful athletes don’t always travel along a path paved with
roses. They overcome disappointment and self-doubt to win. One might say it is
precisely because they endure those turd-like troughs that they can rise to the
peaks of global greatness! A wise Buddha once said that ‘the arrow that hits the bull’s-eye is the result of 100 misses’.”

Chrissie has taken 2012 off from full training and racing. “I
believe that racing should never be the be-all and end-all of my life. I wanted
to inject some variety back into my life this year, some balance, and some
spontaneity.” Therefore, Chrissie is now spending more time with family and
friends, reading more widely, going to concerts, promoting her autobiography, A Life Without Limits, and also working
closely with the charities she supports.
“Sport has a tremendous power and can be a force for considerable change
through fundraising and awareness efforts,” she says.

When asked about her future, Chrissie is happy for it to
remain unknown and exciting. In her book, she writes, “…how can I speculate on
what the future holds, when the present is so astronomically removed from
whatever expectations I might have had in my youth? My only policy throughout
has been to keep an open mind and, whatever I may do, to give it my all. It
still takes my breath away to think where that simple outlook on life has taken
me. I never set out to be a world champion – not many ordinary girls from do – but neither
have I ever wanted to be left wondering, ‘What if?’ “

1.
Have a clear, realistic goal: Write it down, then post it
somewhere visible. It’s also crucial to know why you want to achieve this. You
must be passionate, excited and energised about the goal.

2.
Create a plan: To give direction and structure, and prevent procrastination, the plan
should be realistic and tailored to you and your lifestyle.

3.
Create an environment that supports this plan: For
example, find a gym,
running track and pool that are conveniently close and financially affordable
in the long term.

4.
Set smaller tasks as stepping-stone
goals: These make the bigger, long-term goals
seem less overwhelming, and ensure that you can enjoy the journey with successes
along the way.

5.
Use music: Listen to a podcast or lecture, download Chrissie’s AudioFuel workouts
(coaching and motivation combined!), or read your favourite book or watch an
uplifting movie or YouTube clips while spinning.

6.
Keep a log of your workouts: Make sure you highlight any accomplishments and
successes, note how they make you feel, and then celebrate getting up and over
these little milestones.

7.
Sometimes we need others to help motivate, guide and encourage us: This could be a coach or
training partner, your spouse and children, a local sports club/group, or even
online chat forums.