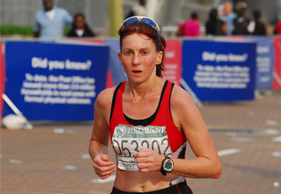 In 2008, while
out on a run with friends, Retha Schutte mentioned that she’d like to run for a
charity. The idea was left there, until last year. “In August, I knew I needed
to start the Lighthouse Run. Often, abuse is an issue left in the dark. We’ll
shed light on the issue, council women, men and children, and make abuse an
issue that is not hidden away,” she says.

Retha spent
most of her childhood witnessing her alcoholic father beat up her mother,
brother and sister, and says she now has the opportunity to speak out and help
turn the tide. “Now I have a voice. Now I can stand up. Every 17 seconds in
this country, someone is abused – whether physically, sexually or mentally. We
want to tell people its okay to speak out and get help. And we want to show them
that there is life after abuse.”

Retha
shares not only this cause, but also a love of running long distances with her
friends Machelle Bremer and Sorita van der Walt. For six weeks, these three
intrepid women are planning to run a marathon a day, starting in Umhlanga, just
north of , and following the coastline and
its lighthouses to finish at in the . The journey will cover roughly
2 000km and the team will reach communities along the way, spreading the word
and launching workshops en route. The Lighthouse team will also be accompanied
by a community service team in clinical psychologist Eugene Viljoen, life coach
Kudzai Shoko, and Herman Schutte, who will facilitate emotional intelligence
and conflict management.

Retha
explains why they chose to focus on lighthouses: “Every lighthouse has a unique
signal and rotation pattern every few seconds. Like abuse, the rotation happens
quickly. Now we want to fight against the issue so people can act against the
situation before violence spreads. We want to get the word out there because
little is done about abuse. We aim to council victims on recovery as well as
men who want to be rehabilitated. We will also give children a chance to speak
and give anyone legal advice when it comes to abuse.”

Retha and
her running team are ready to conquer the coastline, as they have a rich
history of running marathons and ultras. Retha has clocked four Comrades
finishes, with a PB of 9:38, as well as five Loskop Marathons. Some of Machelle’s
running highlights include six Comrades finishes, including a best time of 7:25
and 24th position in the women’s race, as well as seven Loskop runs.
Back-up runner Sorita has been running since 2008 and has a number of half
marathons under her belt.

The Lighthouse
Run is set to start on November 19 and run through to December 27, which will
coincide with the government’s 16 Days of Activism against Gender Violence
campaign. So far, South African celebs have taken to the project with musician
Elvis Blue and Comrades gold medallist Lindsay Van Aswegen already on board to
run some legs. Chevrolet South has also
promised the Lighthouse Run transport to get the word out there and spread
light on the evil that is abuse.