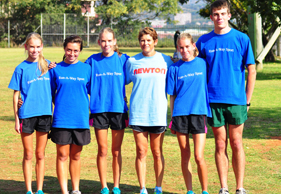 At the end of March, during the
Yellow Pages SA Junior and Youth Track & Field Champs in Germiston, we were
treated to a rare sight in the 2000m steeplechase for under-18 girls: A set of
identical triplets finishing 1-2-3, running one behind the other, in perfect
step with each other, even with pony-tails swinging from side to side in
unison. And their nearest competitor wasn’t even in the home straight yet when
they crossed the line. Olivia, Alicia and Sindy Labuschagne certainly made
quite some impression!

When they were only 12 years old,
the triplets went to their mother, Maryna, and asked whether they could take part in athletics at
school, because it looked like the “cool thing to do.” At their very first
athletics meet, everyone was talking about these three identical girls that
appeared from nowhere and ran so well, and everyone wondered who was coaching
them. When Maryna  told onlookers that they had never competed
before, nor did they have a coach, one of the parents responded, “These kids
have talent, you need to get them to a coach.”

Today the 16-year old triplets are
the shining stars of Wonderboom High School in Pretoria, and are coached by
Piet Nothling, who describes them as “hard working, humble and friendly girls.
They listen and believe what their coach has to say.” The triplets are truly
passionate about their sport and take part in everything from 400m to 3000m as
well as the 2000m steeplechase, but say their favourite discipline is cross-country,
due to their great love of nature and the outdoors.

Last year the sisters were the three
fastest under-18 girls in the country in the 2000m steeplechase, with Olivia
clocking 7:10.88, Alicia 7:16.66 and Sindy 7:19.12. Olivia’s time was the sixth
fastest ever by a South African junior athlete. At the Yellow Pages South
African Junior, Youth and Under-23 Champs in April, Alicia won the youth
women’s 1500m, while Sindy was seventh and Olivia eighth in the 3000m. Then in
the 2000m Steeplchase, Sindy was second, Alicia third and Olivia fifth. In July
the three ran a 15km road race in Pretoria and recorded another 1-2-3 finish,
with Alicia running 64:40, Olivia 64:43 and Sindy 64:44, the third, fourth and
fifth fastest times in the country for the year for junior girls.

This year the highlight has been
their 1-2-3 at the SA Youth Champs, where Olivia clocked 7:11.10, Alicia
7:14.40 and Sindy 7:14.72. They have also been in action on the road, where Alicia
ran 57:52 and finished second in the Pick n Pay Rotary 15km in Pretoria in
April to post the fastest time this year by a South African junior. Olivia came
home third in 57:57, but to Sindy’s disgust, she was booked off sick and had to
miss that race. However, she was back in action when the three went to
Kimberley for the SA 10km Champs in mid-May, with Olivia finishing third junior
in 36:41, Alicia fourth in 37:03 and Sindy sixth in 38:43.

Sindy and Olivia’s future goals are
focused on one day running 31 minutes for 10km, while Alicia’s goal is to go to
the Olympics with her two sisters by her side. Their goals are supported and
motivated by parents Maryna and Victor, as well as their older siblings
Victor and Samantha. The whole family enjoys cycling, hiking and jogging
together, and all five children now have provincial colours in cross-country,
so the running genes are strong in this family.

Although the sisters often compete
against each other for podium positions, they see each other more as motivation
than competition. In fact, they don’t like running unless without each other…
In one meet, Olivia and Alicia ran in a different race, but Sindy refused to
run later that day without her sisters, which in the end saw Alicia and Olivia
ran a second race on the same day. “I don’t enjoy the sport without my sisters
running next to me,” explains Sindy. “We don’t care who wins, as long as it is
one of us. We work as a team and would not find running as much fun without
each other.”