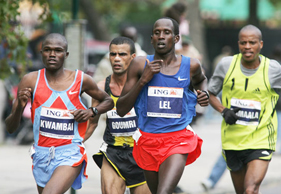 You would
expect an athlete who has represented his country at four Olympic Games and
numerous World Champs, and who has won the prestigious New York City Marathon,
to be training at some high performance centre with a team of coaches and
experts. But not Hendrick Ramaala. Drive to the beautiful Zoo Lake in
Johannesburg and there you will find him every morning, running a 3.5km loop.
It is here that Hendrick meets up with a couple of running buddies and finds
his peace and joy in running, which he describes as his “life.”

Hendrick’s
training ground is but one of many ways in which he sets himself apart from
other athletes and training methods. He is extremely laid back, but speak to
him long enough and you will soon realise that this is an athlete with a
burning passion for the sport of running and the development of South African
athletics. “I have no secrets to longevity. I just love running and competing
at the highest level. I get up every single morning and I run. That’s what I
do. I don’t get bored of it and there’s never a day that I don’t want to run.
It is not a labour of pain. I don’t run because I have to, I run because I love
it. It’s been a way of life for the last 20 years,” says Hendrick.

His dedication has clearly paid off. He has run the New York
Marathon nine times and has won this Big City classic in 2004. He followed that
up with a win at the Mumbai Marathon the same year, and has also run the London
Marathon eight times, where he has finished in the top ten. He has represented
South Africa at three World Marathon Champs, five World Cross-Country Champs
and two World Track and Field Champs, and he’s won two silver medals at the
World Half Marathon Champs (1998 and 1999) and is a two-time
national champion in the 5 000m.

And who will ever forget that
sprint finish in New York in 2005 when Paul Tergat, former world marathon
record-holder and one of the most accomplished long-distance runners of all
time, beat Hendrick to the line by less than a second. Tergat won in 2:09:29.90
leaving Hendrick to take second place in 2:09:30.22. On top of all this, Hendrick is the
second-fastest South African over the marathon distance, with a personal best
of 2:06:55, set at the London Marathon in 2006.

Hendrick
got into running purely by accident after a soccer injury at the age of 20 forced
him to look at alternative ways of staying fit. He soon discovered his talent
for running and moved up the ranks in the ‘old fashioned way,’ first starting
out as a cross-country and track runner. “Too many athletes associate track
with pure sprinting. They need to be educated that there are 5 000m and 10 000m
events, and you first need to run well at these distances before you can run a
good marathon,” says Hendrick, a law graduate from the University of the Witwatersrand
who still holds the South African 10 000m record of 27:29.94, which he set in
Port Elizabeth on 22 February 1999.

“I see my marathon running as
the second part of my career,” says Hendrick, whose Olympic journey started in 1996 when he made
his Olympic debut, aged 24, at the Atlanta Games, where he was eliminated in
the heats of the men’s 10 000m. Four years later, in Sydney, only six months
after making his debut over the marathon distance, he finished 12th in the Olympic
marathon. Unfortunately, he did not finish the marathon at the Athens Games in
2004 after dropping out in sweltering conditions, and four years ago in Beijing
he finished in 44th position.

“The Olympics
is a different ballgame and I have not performed that great at any of them. I
wish I had, but I have always performed better at the big city marathons, maybe
because the pressure is different. At the Olympics you run for your country and
the pressure is more intense, whilst at the big city marathons it is more a
feeling that you are on your own and you don’t have that much to lose.”

His recent
performance in Dubai,
where he clocked 2:12:12 and finished 19th was his fastest marathon in
nearly three years. He bettered the IAAF A standard for the London Games by
nearly three minutes, yet it remains to be seen if he will be chosen to be part
of the South African marathon team. Only three team members get chosen and at
this stage there are three other runners who have already clocked faster times
than Hendrick. “I would like to go to London, but we will see if that happens
when the team is announced at the end of April. I know that I can still do well
and I have the belief, the motivation and the love for running. Right now I am
training as if I am going to the Olympics. If I make the team, great! If not,
there are hundreds of other races I can target.”

Hendrick
trains twice a day and includes a long run of up to 40km in his weekend
schedule if he is in training for a marathon. He believes strongly in quality
work and includes two track sessions and two tempo sessions in his training. He
averages about 3min/km in his tempo sessions. “I have a training programme, I
follow it and don’t question it,” says Hendrick, who has always been self-coached
and who says this has worked for him through trial and error.

He admits to
being an aggressive runner who likes to lead. “My strongest point is that I can
persevere and hang on. I believe everybody can train for a marathon, but not
everybody can race a marathon. Many can’t take the pressure and go into a race
without a plan. You need to know that while racing, you will always feel like
stopping, but that is when you hang on.”

He has the
greatest respect for Kenyan runners after living and training with them. “For
them running is a tradition. They don’t run for fun. They run to win, and have
the belief that they can do it. There are so many rags to riches stories,
especially in Northern Kenya. I have seen how they train and how much they
sacrifice. Some of them live in training camps and don’t see their families.
They have a system in place; they nurture young talent and know what it takes
to be a champion. Running in Kenya is a business,” explains Hendrick.

An absence of
development and coaching structures in South Africa is our biggest downfall,
says Hendrick. “There is no question that we have the talent in South Africa,
but we need more development coaching, which makes the transition from junior
to senior so much easier. We also need to improve the standard of our coaching.
There are so many big sponsors throwing their weight behind sport such as rugby
and cricket, but not athletics. In our country there are no systems in place,
everyone is all over the place and doing their own thing. We should establish
schools of excellence with set standards. We have the resources, and yet we are
not willing to do it. Look at rugby, they are all excited about their new kit
and much is made of it, yet in athletics you are on your own.”

“It’s a fact
that most of our good runners are poor. They still struggle with basics such as
shelter and food. In other countries, these things are a given. It takes 2two
to three years of Olympic cycles to develop a champion. Take for instance
Hestrie Cloete and Khotso Mokoena… we saw them winning at youth level before
they eventually did well years later. Imagine a National School of Excellence
where young talent is groomed and nurtured. Unfortunately the talent we have often
give up. They go out and look for jobs because they have to survive.”

Hendrick’s
career is far from over. He admits to probably ending up running ultra’s and
even having a go at Comrades, but definitely not now. He still has way too much
speed in those legs! And hopefully a chance at a fifth Olympic Games.