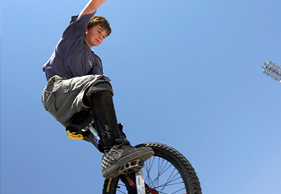 In
the first week of March, some 35 000 cyclists took to the streets of Cape Town
for the Pick n Pay Cape Argus Cycle Tour. Most were on conventional bicycles,
but there were also five unicycles in the field, one of them ridden by Jonathan
Benjamin of Cape Town. This 15-year-old grade 10 pupil from Westerford High
School was doing just his second Argus, and his first on a unicycle, but he was
riding with the iron-willed determination to finish – so that he could collect
on the pledges various people had made to his fundraising drive for Afrika
Tikkun, a non-profit NGO that delivers education, health and social services to
children, youth and their families in South African townships.

“I
realised I could make a difference while doing Argus, so I was looking for a
charity to ride for, and then I got an e-mail from someone at Synagogue talking
about Afrika Tikkun looking for people to ride for them, so I decided to go for
it,” says Jonathan. “I originally set my target at R2 160, which is the cost of
sending one child to school for a year, but when I got close to that, I raised
the target, and kept raising it until where it is now at R30 000! If everybody
that has promised me money sticks to their word, I should get to about R32 000.
I wasn’t expecting to even get close to R10 000, let alone R30 000, so I am
extremely happy!

Jonathan
began unicycling nearly five years ago. “I had a teacher who was obsessed with
the circus and she had a unicycle in her class. It caught my attention and I
wanted to learn to ride it, so she leant it to me and I took about a week to
learn. It is normally quite hard for most people, but lonce you’ve got it, it
really is like riding a bicycle. What makes it harder, though, is that you
can’t free-wheel on a unicycle, you have to keep pedalling and constantly have
to balance, so you can never rest, and there are no gears, plus you’re sitting
a lot higher, which means there is more wind resistance.”

Shortly
after his first unicycling attempts, Jonathan’s father, photographer Shawn
Benjamin, started mountain biking and Jonathan would go along on his bike. Up
in the forests on Table Mountain one day, he spotted more unicyclists. “I saw a
whole group of people unicycling in the forest, on off-road unicycles, which is
what I wanted to do, so I got myself a 20-inch unicycle and took up forest
unicycling.”

ARGUS ON ONE WHEEL

Having
mastered the one-wheeler, Jonathan told his parents that he would like to ride
the Argus on a unicycle, but they said he was still too young and
inexperienced. “I’d been wanting to do the Argus on my uni for three years, but
the first year I was still too small to fit on a big 36-inch uni, the second
year my parents said I first had to ride a normal bike to get experience of the
race, then this year they finally said yes.”

That
saw Jonathan up his training considerably for what would be his longest
unicycle ride yet. “I did some mountain biking with my dad for basic fitness,
then two 20km off-road rides on my uni, and then a 30km, a few 60km and one
70km ride on the uni on the road. I also did a few quick mid-week rides near
home.” Some of his training was done with three fellow unicyclers who would
also be riding the Argus, and he was leant a 36-incher by Alan Reed of Oddwheel
Unicycles.

“We
all started together in NU group, along with a visiting American unicycler, but
I only saw two of the others during the race. The race went extremely well and
I was the first unicyclist to cross the finish line in about six-and-a-half
hours. I thought the last 40km would be a lot harder, but it wasn’t as bad as I
expected. Still, I’m not sure if I will do it again on a unicycle, but I had a
great time and want to say thank you to everybody that supported my fundraising.”