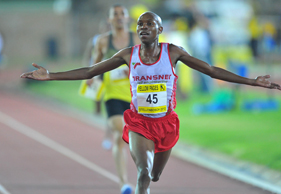 It’s been a busy start to the year for Elroy. In
mid-February he won the South African Cross-country Trials, then jetted off to
Istanbul, Turkey for the IAAF World Indoor Champs in early March, where, he
made it to the final of the 3000m, finishing in 7:48.64 to break the SA Indoor record. A week
later he was second-best SA finisher at the CAA Africa Cross-country
Championships in Cape Town. Just two days later, he was back on the track at
the Stellenbosch leg of the Yellow Pages series, going after the 13:20 IAAF A
standard qualifying time for the 5000m for London.

Admittedly, Elroy’s personal best is only 13:25.09, so
he has some serious work to do if he wants to get to London, but the way he is
going after that mark is what makes people think he can do it, even if he did –
quite understandably – fade a bit in the middle of the race in Stellenbosch.

“I maybe started a bit fast and my hamstrings
really felt it after a while. I’m still feeling the cross-country in my legs
and haven’t got my rhythm back yet,” said Elroy, having just run 13:25.50, less
than a second off his PB, and finishing second to Gladwin Mzazi. “Still, I
think I can go faster if I rest up now, then work on getting my pace and
endurance right to go for 64 seconds per lap. I was close today, and I know I
can do it.”

Much is expected from Gladwin Mzazi after his
recent performances in the 5000m. In Stellenbosch, he initially looked a bit
off the pace, then joined Elroy Gelant up front to chase that 13:20 qualifier,
and eventually outsprinted his tiring countryman to win the race in 13:24.50,
the sixth-fastest ever by a South African, and take nearly six seconds off his PB!

Gladwin and training partner Steven Mokoka, who missed
the race while recovering from a minor injury, have made it known that they are
chasing the 5000m qualifying mark. In the Yellow Pages Interprovincial in
Bellville on 3 March, he and Steven really went for it, but a strong south-easter
blew away their chances. Still, the two gave the crowd a huge thrill with a
sprint finish that Gladwin won.

After his PB in Stellenbosch, Gladwin said, “I
really wanted to go for the qualifier, but my body just did not respond in the
first 2km. I’m very happy with my PB, but I need to go faster if I want to get
to London. I think if Steven had been here today, all three of us would have
done it.”

Having been to the Beijing Olympics in 2008, the
Commonwealth Games in Melbourne in 2006 and four
IAAF World Champs meets, LJ van Zyl has both the ability and the experience to
bring back a medal from London.
He took bronze in his specialist event at the World Champs in South Korea last
year, then anchored the 4x400m relay team to silver, and also finished fifth in
Beijing and first in Melbourne. And what’s more, he says he owes it to himself
to be on the podium in London.

“I’ve won medals at the World
Championships, Commonwealth Games and African Championships, so what I really
want now is an Olympic medal. I was fifth last time and want to do well again,
but first I must qualify, then get to the final, and to do that I need to be
running consistently under 48 seconds.”

To qualify for London, LJ has to run
49.50 seconds, and with a PB of 47.66, the SA record he ran twice last year, he
feels the qualifying mark is within his grasp. However, he has still changed
his approach this year. “Last year I was in top shape in April and May, but
this year I want to shift those six weeks to reach top shape at the Olympics.”
LJ says he will also be running a few 400m races, having run 44.86 second in
Germiston last year, a mere 0.28 seconds off the national record. “If I can go
a little faster in the 400m, I know I can bring my time down even more over the
hurdles.”