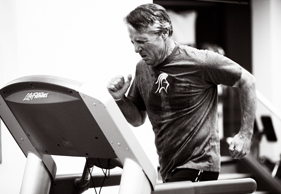 Gary Player, or the
golfing legend better known as The Black Knight, has travelled 25 million
kilometres in 58 years, playing the sport he so passionately loves. Hard to
believe, but Gary initially did not think much of golf. “My father took me out
to a golf course when I was a young man to introduce me to the true gentlemen’s
game. The first thing that came to mind was: ‘This game is for sissies!’ But
once the bug bit, that was it for me. I have lived most of my life in hotels
and motels. It has been an exciting life, but a difficult life too… how I
longed for my family.” Today Gary makes up for all that lost time by spending
as much quality time with his wife, Vivienne, six children and 21 grandchildren,
all of whom he adores.

Gary’s father was a
great inspiration and big influence in his life. He was the one who motivated Gary to create a brand for himself, while Gary’s son Marc also helped improve his brand
dramatically. His nickname Black Knight was inspired by a television programme
called Have Gun Will Travel. Gary was intrigued with the show, which was
about a man dressed in black who helped a lot of people. This inspired Gary to
wear black at most of his tournaments. Soon enough the media named him The
Black Knight and the name stuck. Today his son Marc keeps Black Knight
International running, with Gary Player
Design, Player Real Estate and Black Knight Enterprises all part of a company
that does licensing, events, publishing, wine, apparel and memorabilia
throughout the world.

Gary won his first
golf tournament in Benoni in 1953, at the age of 18. “My father was waiting for
me at the 18th green to see my victory. Here was a 6 foot 2 inch man
crying like a puppy! My father was not a wealthy man, and to see his son
winning and becoming a possible champion was an emotional moment in his life.”

Gary is one of only
five golfers, and the only non-American, to have completed a Career Grand Slam by
winning all four Majors tournaments, the Masters, US Open and PGA Championship
in the USA, and the Open Championship (British Open) in the UK. He is also the
only golfer to complete a Career Grand Slam on the regular and Senior tours. “The
Senior Tour was way harder as I took part in it after the age of 50 and needed
to be highly disciplined with my training and nutrition regime to be at the top
of my game. One thing is for sure, I was the fittest senior,” chuckles Gary,
who has nine Majors to
his name and has won 165 tournaments on six continents over six decades. He was
inducted into the World Golf Hall of
Fame in 1974.

Golf is a tough
sport and Gary says it has taught him many lessons over the years. For example,
if you arrive late for a game you get a two-shot penalty. “But golf has also
taught me a lot about life, to respect people as I respect my opponents, and
most of all to have patience. I had school colours in rugby, cricket and
athletics, so I know what sport is about, but no other game has taught me as
much about life as golf has. It’s a true test of dedication, hard work and
patience.”

Gary is not only an excellent golfer,
but also a successful businessman. He believes it is important to surround
himself with capable people to assist him. He is especially passionate about
his racehorse farm in the Karoo, and is not afraid to get his hands dirty while
spending time there. He has built an amazing set-up for his thoroughbred breeding
operation and takes pride in his well-bred stock and beautiful stud farm. He
says the Karoo remains his favourite place in the world.

He is also famous for designing
world renowned golf courses and the most recent course he completed is the
captivating Saadiyat Beach course on the beachfront in Abu Dhabi. This course
was recognised as the “Best Golf Course” in the Middle
East & Africa at the 2010 CNBC Property Awards. Gary’s favourite designs
are the Gary Player
Country Club, The Links, Leopard Creek and Blair Athol. Another favourite to
play is Augusta in the USA, where the Masters takes place.

Gary also does a lot of work amongst
the underprivileged youth and has raised vast amounts of money around the world
that has been used to improve the lives of thousands of people. His lifestyle
and commitment has been an inspiration to many young sportsmen, and he still
travels all over the world working on his charities, but admits that at the age
of 76 it is starting to tell on him.

Gary says the recipe to his success
and being at the top of his game for so long was a mixture of his exercise
regime, hard work, belief in himself, having good faith, a great wife, family
and friends, sleeping well and having a good sense of humour. “Above all, I
never gave up!”

“Before my brother went to war at
the age of 17, he told me to never stop exercising, and that’s basically what I
did, and am planning to do the rest of my life. I will never stop working. You
don’t retire, you simply work less.” Today, Gary still believes in healthy
living. He does 1 000 sit-ups four times a week and spends his time running on
a treadmill, alternating his running speed. On top of this, he does stretching
and weight training almost every day of the week and says he will beat 80% of
20-year-olds in a fitness competition.

He believes that the key to a
healthy mind and body lies in the way you eat and the amount of exercise you do,
and says that diabetes, cancer and heart attacks are some of the world’s
biggest threats. “Only one out of 5 000 people will do anything about their
health and lifestyle to avoid these fatal diseases. They spend more on their
cars than they do on their bodies!”

“Stay away from high-sugar and fatty
foods. Remember, once you are 10 pounds overweight, you are in deep trouble.
What you consume contributes enormously to diseases like diabetes, heart
attacks and cancer. About 80% of athletes today use performance-enhancing
medicines and most of them will be sorry when they get older. When you eat a
well-balanced diet consisting of all the nutrients you need, you do not need to
use any performance enhancers. Unfortunately, we can’t stop this, as the
rewards for excelling are so big.”

Gary rarely eats meat, doesn’t drink
milk, avoids dairy and does not eat bacon. He eats a small amount of butter and
he likes to fill up on carbohydrates. “My only weakness is eating sweets. I eat
sweets four days a week, but I am trying to cut down!” He also feels people eat
far too much protein, and says it would be far better to eat a plant-based diet
as far as possible. Depending on his travelling schedule, he tries to have
juiced green vegetables every day as he believes that this is one of the great
secrets of good health and that the next big advances in athletic performance will
be dietary.

When asked if he had one wish for
South Africa his response is: “A crime-free country, employment and a good
education for all, mutual respect and tolerance for each other, and unity
amongst us all. And we need to work together to eradicate AIDS in our wonderful
country.”