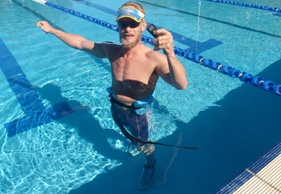 Growing up in Natal,
it was a yearly ritual to support the Comrades runners, with everyone in the
house getting up early to watch the start and spending the day in front of the
television waiting to cheer on the final runners before that gun went off.
Also, my mother came from runners and my dad was a runner, so I knew about
Comrades before I even knew what a marathon was, but I was a swimmer until 2009,
when I thought it would be a fantastic idea to run Comrades in 2010 and stay
for the Soccer World Cup.

However,
living in Australia
and training for Comrades is honestly one of the most mentally challenging
quests I have ever done. One of the main reasons for that was the lack of major
running clubs like you get in South
Africa, and being so far away from the
build-up to Comrades, so it was hard to find that drive that has to be the
core, I think, for every runner wanting to be involved in Comrades.

So when I
crossed that finish line in Durban,
in a time of 10:32, the first thought that entered my head was that I needed to
do it again. A sub-9:00 Bill Rowan medal had been my goal, and being the
stubborn person I am, when it comes to achieving personal goals it becomes my
number one priority. Therefore, my goal for 2011 was a sub-9:00. I thought
about it a million times a day and talked to my girlfriend (now fianc?) and my
friends about it daily!

My training
started a lot earlier this time round and mental preparation was a main goal. I
started running 10km three times a week in August, with the intention to qualify
at the Sydney Marathon in mid-September. However, it happened to be the
Oktoberfest in Sydney
on the Saturday, so we decided to have one cheeky beer… and I ended up being
very sick in the hotel room until the early hours of the morning! I managed to
finish in 4:28, but will never again go to Oktoberfest the day before a
marathon!

By the start
of January I had only about 300km under the belt, partly due to laziness, but
also because it was difficult to get motivated with no running clubs in my area
who train for marathons, never mind double marathons! And trying to find a
training partner for a Sunday 40km long run in the hot and humid Australian
summer was a joke. I was finding it a lot tougher than the previous year, it
was more mentally challenging with the boredom and time spent alone – and it
was going to get a lot worse with what was in store for me.

I got to
March and was having niggling problems with my shins, calves and hamstrings, but
deep tissue massage seemed to help and I finally ran got another qualifying
marathon under the belt, running 3:48 at the Caboolture Marathon. A very
interesting marathon, running loops of 500m around an old village and then
every hour they would alternate the direction. Good group of people that made
the night memorable and having such a short course was great for spectators.

Then, early
one Sunday morning, I was up at 4am for a 60km long run, but I only got to 3km.
I wanted to do 60km because I had missed a few long runs and my confidence was
down, so I needed to finish a massive run to believe I can do it. But the pain in
my left shin was just too sore to keep running and it was the longest, hardest
walk home. Shin splints was my initial thought, so I saw a sports
physiotherapist, who referred me to a sports doctor with a note saying “possible
fractures in left tibia.” I had an MRI and they found a bad hairline fracture
about three-quarters the length of my tibia. The doctor said it looked like I
had been “running on a broken leg” for quite a while, and I must stop running
for at least six weeks, but this was just nine weeks till Comrades, and I did
not take it well…

Where there
is a will, there is a way! So I found a podiatrist after my stubborn side
kicked in and he asked me, “Do you want to do Comrades?” and I said “I’m
finishing Comrades!” He agreed to help me and told me about water running and
low-resistance cycling to keep the cardio training up while I couldn’t run. He
also needled my legs to introduce more bloodflow for increased healing. I researched
water running, found myself a floating belt, and a week after I had seen the
doctor and stopped running, I was water running.

WOW, water
running is not a sport to get inspired by or think it will move you mentally,
but if this is what it would take, then I was doing it. It was a 25m pool with
a clock at one end. The first couple of laps were not too bad and I felt like I
was getting a workout, but by the tenth lap time stood still and my mind
wondered… From then on, I don’t know what people passing by would have thought,
but I hit the pool with a running hat on and my ipod tucked under the hat, with
my running shoes, going for gold in the pool! If this training did not work
that great for actual Comrades training, then at least it made me mentally
stronger. Or insane.

About a week
before I left for South Africa, I managed to smash out 5km on grass, which
really felt good and gave me that boost of confidence that I needed, but in the
back of my mind I knew there was still another 80km on top of that to go. I got
to South Africa
a week before Comrades and stayed with family in Westville, where I managed
another 5km, this time on tar. The night before the race, I prepared everything,
slept well, and in the morning my mother drove me down to the start in Durban. I was feeling a
little nervous, but good. Then, watching other runners getting out of their
cars, I noticed their running chips on their shoes… My language was not for
any mother to hear, let alone my own, but somehow we got to Westville and back in
time for the start!

I felt great
for about 25km, but then came a twinge in the right hamstring that would never
go away. When I got to Pinetown it dawned on me that the sub-9 was unfortunately
going to remain a dream. Every marker I would try work out what my finishing
time would be if I kept at that pace and the whole day then became about
running, maths and urination. I think I must have the smallest bladder in the
world when it comes to Comrades! By the time I got to halfway I was knackered,
mentally and physically, but knowing that I had my family and friends there on
the day and my fianc? in Australia
watching on the Comrades website and texting me, kept me going.

Polly Shorts
just never ended, and at the top my time was really tight to get to the end
under 11 hours and get another bronze – I would have to run the last 7.5km to
make it. As if I had not had enough stress for the day – or the past nine weeks
– here I was worrying about the medal I got… but that’s what happens at
Comrades, and I made it in 10:54.

I am now taking
a break from Comrades, but find it hard thinking that I am not doing Comrades 2012.
I will try reach my Green Number, because I think that is the pinnacle of the
sport. Comrades is a bug and you just have to keep doing it until you are
cured!