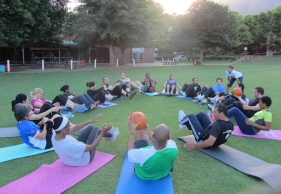 In high school I never considered myself to be a runner. Instead I was always the person who cheered on my friends during our inter-house athletics. But one fateful day in 2006, during my Sport Science Institute of South Africa (SSISA) orientation, the last introductory stop we made was to Kathy McQuaide-Little’s office. As I entered, I was overwhelmed and fascinated by the medals and photographs of her running experiences, ranging from the Old Mutual Two Oceans Marathon and even the Comrades Marathon. As I glanced at all her medals, I knew I wanted to venture into the unknown.

MY RUNNING LOVE AFFAIR
Soon after, she went on to ask whether or not I had any interest in running. Then she informed me about a competition they were running and encouraged me to enter. I wrote in for the competition and was one of the six people selected for the Old Mutual Two Oceans Marathon Nike Superstar Programme. We joined OptiFit, a running programme for beginners offered at the SSISA, and this proclaimed the beginning of what soon became my love-affair with running.

A year later, in 2007, I completed my first Two Oceans Half Marathon in 2:26. Successfully finishing this race, one which I had never envisioned myself completing, remains my best achievement to date. The experience gave me a new lease on life: I gained a renewed sense of self-belief in my abilities. From there onwards, anything was possible; the world was mine for the taking!

I continued running and completed the following half marathons: Cape Town, Grape Run, Gun Run and my second Two Oceans in 2010, finishing in 2:14. In the same breath, there have been challenges: after my second Two Oceans I suffered a knee injury which took 18 months to conquer!

MAJOR PAIN
In the early weeks of November, I joined the Sport Science Institute’s Boot Camp Programme, an intensive eight-week programme that takes place in Newlands, with three sessions a week. It provided me with a holistic exercise experience from strength, resistance and cardiovascular exercise, as well as expert advice from ‘Major Pain’ (a biokineticist and real taskmaster). During these sessions, he pushed us to our limits and was most encouraging, with fun punishments dished out if we were slacking off. Rain or sunshine, the prospect of outdoor exercise served as motivation throughout my course.

My experience at Boot Camp was really fruitful; each week we were provided with rich information pertaining to articles covering different topics ranging from yoga, diet and fitness, and as a result thereof, I gained more knowledge on healthy eating and exercising. Most of all, I gained strength and improved my fitness levels. Boot Camp taught me about the value of teamwork, and how important it is to remain consistent, no matter how hard it is.

Yes, there were times when I thought I could not push any further, when I felt defeated. However, the thought of how far I had come made me persevere. Today, not only have I regained my strength, but I am fit as well. At the end of each week I reflected on Boot Camp and wrote about it in my blog, journeyofhope28.wordpress.com. Overall, not only was the experience life-shaping, but it was fun.

Mahatma Ghandi once said, “Every worthwhile accomplishment, big or little, has its stages of drudgery and triumph; a beginning, a struggle and a victory.” And so it was with pursuing my dream. As I look back, the end of Boot Camp proclaimed a new chapter in my love affair with running; one of maturity, foresight and a fresh perspective on exercise. And as I continue with my training for the 2012 Two Oceans Marathon, my assertion remains: Nothing is impossible, because all power is within us.

Whatever your dream, it is not too farfetched for you to achieve. Don’t only immerse yourself in your thoughts, but strive to make them a reality. Live your dream!

If you are keen to join a Boot Camp with SSISA programme, the next one starts 23 January. For more details, visit www.ssisa.com, e-mail fit@ssisa.com or phone 021 659 5600.