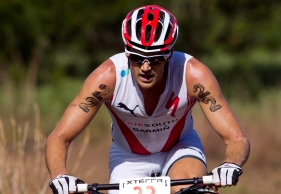 Dan Hugo took his first XTERRA steps in Stellenbosch and with guidance from one of the all-time great triathletes, Conrad ‘The Caveman’ Stolz, it was only a matter of time before he stepped up to play with the big boys. “Conrad had a big influence on me because we spent a lot of time together when I was younger. He exposed me to many other top triathletes and introduced me to the possibility of an alternate life, but also made me aware of the restrictions that come with leading an athlete’s life. It’s not all romance, and I learnt a lot from him.”

Dan did his first local XTERRA in 2004 before heading to Brazil for his first international event in 2006. “I’m pretty driven and did my first triathlon when I was nine years old, but I stumbled around during university for a while, trying to decide where to next. What really swung me was Conrad telling me of a race he did in Brazil. The pictures he showed me seemed idyllic and I organised to compete there in 2006. I knew if I came fourth, the prize money would make me break even, so I went for two weeks, combining the race with a holiday. That race is still one of my favourites thanks to that experience!”

He did manage that fourth place and subsequently turned professional. In 2007 and 2008 a host of first and second places at local multi-sport races followed, as well as quality performances around the world. He became a regular top five finisher at several XTERRA races across the USA in 2009 before he swept away all local competition and kept delivering promising performances in the USA in 2010. But 2011 proved to be Dan’s best year thus far and he finally delivered on the promise he had shown for the previous four years. In a year filled with highlights he secured the South African XTERRA title in January and beat Lance Armstrong twice in November to finish second at both the US Championships and the World Championships in Hawaii.

GOING FOR GOLD
However, being as competitive as Dan is means second will never be good enough. “Finishing second in the last two races, you get addicted to that hunger of wondering what could have been. I knew beforehand I was in great shape and just the wrong puncture and the wrong crash changed things, but I’m still very grateful for what I achieved. You can see the cup half empty, but I’m seeing it more than full at the moment. I have that hunger now more than ever, having come that close and felt what it was like. There were times where I didn’t know if I could get here, but the belief I have now is way higher than it used to be. I want to be the best, whether it’s possible or not.”

“I have an increasing ambition and know things can change. Like a compass that’s always attracted to north, I’m addicted to want to get better, to that hunger to improve. I very much believe there is room for improvement and that’s what drives me. On the experience side, I have to keep racing again and again until I start making the right decisions, not only consciously but sub-consciously, too. I’ve been working hard to think more when I’m racing, and the input has been giving exponential output.”

LOCAL SUPPORT
On his return to South Africa, Dan was overwhelmed by the support. “The support back home has grown immensely and I’ve been in a bubble, having so much fun since getting back. So many people have told me they stayed up and followed the World Champs online, and with that my appreciation has also grown!”

Of course, the Lance Armstrong factor contributed immensely to the increased awareness of a sport that usually doesn’t get that much attention, and for Dan the opportunity to race against the Tour de France legend was “exceptionally special.” Lance competed at the US Champs and the World Champs and both times Dan got the better of him. “I’m really grateful for what he’s added to the sport I love. He can choose to do what he wants and I think it really says a lot about XTERRA that he chose it as a hobby. People who had probably never heard of XTERRA came to watch because of him, and the support was remarkable. On some single tracks, in the middle of nowhere, the noise was incredible. I really tried to step up because of this.”

LOVING XTERRA
Dan’s first priority this year is the defence of his national title in Grabouw. “I’ll be in South Africa until April and will do some local racing and local projects. There’s exceptional support here and I want to spend as much time here as possible!” Though he has been seen competing on road on rare occasions, Dan says anything outside of XTERRA will have to wait. “My focus is very much on XTERRA at the moment, but I’ll keep experimenting with 70.3 and road triathlons. I think they’re complimentary to XTERRA, as you’re forced to address a few weaknesses that you can hide away off-road, but I’ll see how it develops and take it from there.”

For now he’s hooked on XTERRA and all it entails. “XTERRA people are a different type of people. They’re very authentic and don’t care about the latest gear, but it’s also about the essence of the race. It’s very dynamic and you have to think all the time. It’s a combination of fitness, skill and finesse, and I’m more of a strength and endurance guy than pure speed, so it fits me. And then of course you get to compete in pretty beautiful spots.”

Life is great for Dan right now, and with motivation not a problem, we are sure to see much more of him in future. “I’m very privileged to finally be at a point where I’ve always hoped to be, and the motivation is not external any more, rather the hunger to see how far I can push the envelope. I swim, bike and run. I get to eat great food and drink great coffee. That’s motivation.”