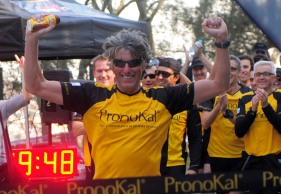 FEBRUARY
A marathon a day
Stefaan Engels, a 49-year-old Belgian who was told when he was little he should not do any sports because of asthma, completes his 365th marathon in as many days. Why? “I wanted to inspire people by showing them that if I could run a marathon a day for an entire year, anyone could run or bike a little each day or do something about their weight problem.” Running in the UK, Spain, Portugal, Belgium, Canada, Mexico and the USA, he finished every marathon in an average time of four hours, with his fastest being done in 2:56.

25 Medals for Paralympians
The South African Paralympic team collects a massive 25 medals at the IPC World Championships in New Zeeland, the most a SA Paralympic team has ever collected in one outing.

APRIL
Records at Ironman SA
After months of training, almost 1 500 athletes invade the Friendly City for the fifth Ironman SA in Port Elizabeth. Fantastic performances by local stalwart Raynard Tissink as well as Britain’s Chrissie Wellington make this year’s event truly memorable. Raynard betters the course record by more than 10 minutes as he claims victory in a time of 8:05, while Chrissie smashes the previous course record by almost 45 minutes to win the race in 8:33 and maintain her unbeaten record over this distance.

MAY
Olympic champion killed
Troubled Olympic marathon champion, Sammy Wanjiru – one of the most talented long-distance runners ever – falls to his death from his balcony in his home in Nyaharuru, Kenya, during a domestic dispute. It is still unclear whether his death was suicide, homicide or accidental. He was just 24.

Hat-trick for Stephen
Zimbabwean, Stephen Muzhingi becomes only the fifth male runner to win three consecutive Comrades Marathons after a thrilling match-up with South Africa’s Fanie Matshipa. It takes all of Steven’s experience to claim the victory and he only manages to leave Fanie in his wake at Polly Shortts as he writes his name in the history books with greats such as Arthur Newton, Dave Bagshaw, Alan Robb and Bruce Fordyce.

SEPTEMBER
Oscar rewrites history
Oscar Pistorius makes history when he becomes the first disabled athlete to qualify for, compete and medal at the IAAF World Championships, in Daegu, South Korea. He reaches the semi-finals of the 400m, where he is unfortunately eliminated, but then goes on to help the South African 4x400m relay team reach the final and set a new South African record in the process. The team goes on to finish second and claim the silver medal position, but Oscar is dropped from the final team in favour of 400m hurdler LJ van Zyl, who has a faster 2011 time for 400m. Oscar still receives a silver medal as part of the team making him the first ever athlete with a disability to receive a World Championship medal. In total, Team SA brings home four medals.

Sandman dominates
Ryan Sandes continues to dominate the trail running scene both locally and internationally as he wins one of the toughest and most prestigious off-road events in the world, the Leadville 100-miler in the USA, and then shatters the course record in South Africa’s grail of trail, the marathon-length Otter African Trail Run.

New Marathon World Record
Patrick Makau of Kenya takes a massive 21 seconds off Haile Gebrselassie’s marathon world record at the Berlin Marathon, on the same course where the Ethiopian set the previous record of 2:03:59 in 2008. With the new record standing at 2:03:38, a sub-2:03 marathon seems to be getting closer.

OCTOBER
Centurion runs marathon
100-year-old Fauja Singh becomes the first centurion ever to complete a marathon as he runs the Toronto Marathon (his eighth marathon) in a time of 8:25. He ran his first when he was 89 in a PB of 5:40. The Indian-born Fauja’s achievements were supposed to be included in the Guinness Book of World Records, but they refuse to recognise him as the oldest marathoner because he does not have a birth certificate, only a passport – when Fauja was born in 1911 in India, no birth certificates were issued.

The Queen of Kona
Briton Chrissie Wellington shows her class as she takes top honours at the Ironman World Champs in Kona for the fourth time, only two weeks after falling off her bike and sustaining serious road burns as well as hip and chest injuries. In the men’s race, Australian Craig Alexander dominates and sets a new Ironman World Champs course record as he becomes World Champion for the third time.

Dan impresses at XTERRA
South Africa’s Dan Hugo shows he has the mettle to take over from countryman Conrad ‘Caveman’ Stolz as the world’s top XTERRA triathlete when he takes second place in both the XTERRA US Champs and the World Champs in Hawaii. At the young age of 26, we can’t help but think his best is yet to come and the XTERRA world had better watch out.

A tragic loss
Five Gauteng runners are killed and one critically injured while training in Midrand for the Soweto Marathon when an allegedly drunk driver ploughs into them during their early morning run. Moroese Mokoatsi (34), Reneilwe Lesenyeho (31), Given Mills (30), Isaac Tlale (37), and Nomvula Dumako (35) are killed, with Khanyiswa Stengile being the only survivor.

GENERAL
Though some progress was made in the administration of athletics in South Africa it remains to be seen whether the positive developments will continue in future. According to James Evans, newly elected President of ASA, 10 new national senior, junior and youth records set during 2011 is proof that the focus in local athletics has shifted back to where it should be, the athletics track, and not the corridors of the office.