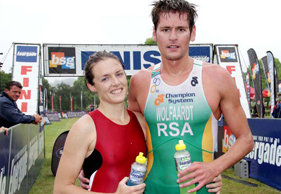 You could say that the day Erhard and Rozi met spelt the end of her running career… but definitely not in a bad way! Rozi, a pure runner who was introduced to triathlon by Erhard shortly after they met, recently made a breakthrough on the local triathlon scene by finishing second at the BSG Energade race held at Harbeespoort. Her transition from running to triathlon was inevitable. After all, her boyfriend and now coach Erhard is one of the best on the local triathlon scene.

Erhard has three BSG series wins to his name and has won more than 25 BSG races during his career. To top that off, he recently won the South African Triathlon Champs as well as the Africa Games Triathlon in Maputo. Nobody could ask for a better coach than that! And judging by Rozi’s recent performances, her switch from running to triathlon was probably one of the best sporting moves she has made.

AN ALL-ROUNDER
Erhard is one of the few elite triathletes who is strong over all three disciplines. He started swimming at the age of five and winning medals fuelled his motivation in the pool. It was in high school that the running bug bit, after he won a school race without any training, and then came triathlon. The rest is history. Erhard went from strength to strength, and in 2006 he finished fourth junior at the World Champs and was crowned Africa Elite Triathlon Champion, Africa u/23 Triathlon Champion and South African u/23 Triathlon Champion.

After school he completed a Bachelors degree in Sport Science from the University of the Free State, but decided shortly after graduating to move to Potchefstroom to pursue his love of triathlon. “I’ve always been a good swimmer and runner, so triathlon always seemed the obvious choice for me. It’s a great sport and I loved it from the first moment. But I had to get out of Bloem to pursue my triathlon career. I needed to find people to train with, and Potch was perfect at the time.”

Even though Erhard is strong in all three disciplines, he believes it is more through hard work than natural ability. “It took a lot of hard work to get to where I am today. I do have a natural ability for all three sports, but I’m constantly striving to get better in the different areas. I don’t necessarily train harder than anyone else, I just know what works for me and what makes me a better athlete.”

His preference for the different disciplines changes every now and again. “At the moment the run is my favourite. I love running when I am in good shape, it feels effortless. Running is the final discipline, so it often determines the winner. A lot of athletes can run, but it’s different when you need to run off the bike. I am a strength runner, which generally makes it a bit easier for me.”

LESSONS LEARNT
As with most elites Erhard had to go through some hard times and ‘grow up’ in order to become the athlete he is today. His hardest lesson was in 2005, after finishing varsity. He went to race for a team in Germany, but quickly realised that he still had a lot to learn. Though it was a tough time, it definitely helped shape his future. “Going from the luxury of home to a foreign country where I had to fend for myself was a challenge, but I had to grow up and deal with the situation. I learnt a great deal about triathlon and what it takes to be a better athlete. Experience is key in this sport, and you have to put it to use in every race.”

Erhard says being good at triathlon requires a great deal of mental toughness, something he still needs to work on today. “This is an area I can use some work at. To be ‘on’ all the time is not easy.” He adds that the lessons he has learnt over the years have led to him training smarter. “I think I found a balance of things that work for me and stuck to it. Triathlon is filled with injuries, bad luck and poor performances, but I took all of that and minimised it by training and being smarter in my approach.”

TRAINING
Erhard, whose main sponsor is Mr Price Sporting Heroes, is self-coached and says he has learnt a great deal from others over the years. A typical training week depends on the time of season, but generally it would consist of 80km running, 250km cycling and 20km swimming. “I would typically do sessions to improve certain aspects of my game at specific moments.”

His training methods obviously work, as Erhard has won more than 25 of the traditionally hotly contested BSG Energade events over the last couple of years. “Nothing beats winning a race. I’ve done it plenty of times and they are all special to me. The short faster, style racing is something I love, and I tend to be very good at it. It is a big part of the sport in this country and BSG/Energade have put in a tremendous effort to promote triathlon and hopefully create future stars of the sport.”

LOOKING AHEAD
Though he has managed to excel, the past year has been one of his toughest as far as injuries, sickness and technical problems go. “I seem to be out of that now and my focus is firmly set on 2012. I have a few years left in the sport and a big year ahead of me in 2012, as I want to focus on the international non-drafting 5150 series. I have to step it up a notch and hopefully secure a sponsor to assist with my costs of getting to these races.” He adds that he would love to compete at the Olympics, but right now he is specifically looking to qualify for the 5150 Hyvee final next year and get a top 10.

Erhard is very thankful to his family and friends who have always supported him through good and bad times. “I have travelled almost everywhere, but for me there is no place like home. South Africa’s beauty, culture, diversity, people and my family makes it the best place to live.”

As a seasoned triathlete, he advises weekend warriors and novices to always remember that if you want something bad enough and you work for it, it will come your way. “Learn as much as you can from your heroes and ask as many questions as you can. Weekend warriors make up the numbers and are essential to the growth of our sport, so keep training and enter as many races as you can. Triathlon has got a great vibe that you won’t find anywhere else.” And of course, through triathlon one can also find love, as Erhard knows all too well…

FINDING LOVE
Shortly after meeting Rozi, he started coaching her in triathlon. They admit they they’re both pretty competitive. “Let’s put it this way, we shouldn’t stop side by side at a traffic light,” says Rozi, who has an Honours degree in Physiology and is currently studying towards her Masters in Occupational Hygiene.

Having been a pure runner from the age of 10, Rozi does not regret switching from running to triathlon after meeting Erhard. “Triathlon keeps you positive. For example, when your swimming is bad, your running or cycling might still be good, so it’s not as demotivating as going through a bad patch with just the one discipline. It’s also not monotonous, and when you are injured you can still improve an aspect of triathlon.”

Her strongest discipline is obviously the run and her weakest at this stage is open water swimming. “My pool swimming is quite strong, but open water is a different story!” Rozi’s biggest achievement up to now has been her latest performances at the BSG Energade series, where she has placed second and third respectively in two of the races. “It’s a big improvement for me in my second year as a triathlete. I would love to race elite internationally and just become the best ‘me’ I can be.”

IT’S NOT ALL ABOUT SPORT
Though both of them absolutely love sport and do all their training together, they do find time to relax. A typical date involves a lot of good food, dessert, red wine and a movie. “We are not party animals at all, so we love a relaxed evening and quality time. We would usually spend time with our friends, visit our families or simply go have a milkshake somewhere,” says Erhard.

Both agree that it is ‘easier’ to date a fellow triathlete, as they understand each others training and moods. “We are often both tired and grumpy, but we understand each other and support each other in everything. Training often comes first, with the exception being Rozi’s Masters degree, so neither of us makes unnecessary demands on each other that would affect our sport or relationship negatively. In short, triathlon has only made us a stronger couple.”