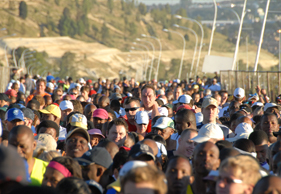 Mazibuko ran with the lead group for most of the race until the deciding moment at the 38km mark, where he pulled away and never looked back, helping him to claim victory in a time of 2:19:04. Mazibuko has a PB of 1:03 in the half marathon and 29:10 in the 10km, and relied on his superior leg speed to pull away from his fellow contenders. Prior to winning the race, Mazibuko won the hotly contested City2City Half Marathon and the Carnival City Half Marathon. He now intends to go for a win in the Old Mutual Two Oceans Marathon next year.

Toyota Athletics Club manager Lucas Mongatane was very happy with the performance of his winning athlete and said this is the beginning of more things to come from his star athletes. He also said they will look after Mazibuko and help him in saving his winnings and club incentives.

In the women’s race, the much talked about Russian Nina Podnesbesnova, running for the Nedbank Running Club, made her presence felt by coming third, but she could not overcome the defending champion, Mamorallo Tjoka from Lesotho. Tjoka crossed the finish line in a time of 2:43:40, breaking Ren? Kalmer’s 2009 course record by 26 seconds, and became only the third athlete to win the Soweto Marathon three times, together with Joshua Peterson and the late Angelina Sephoa.

ORGANISATIONAL CHAOS
Unfortunately, several top-end runners and managers complained about the poor organisation of the race and said they couldn’t perform to their full potential because of this. Irvette van Blerk said she was run over by a stampede at the start of her debut marathon, because the gun went off earlier than it should have. She bruised her knee in the crush and had to pull out late in the race as a result.

Ren? Kalmer won the women’s 10km race, but was also not happy as she says she had to fight her way to the front of the field because there was no seeding system. “The race started three minutes early and there were no timing mats to ensure that all runners crossed the start line, and as a result of this some of the runners jumped into the race way after the start line. There were also no route and kilometre markers and very few marshals on the route. At stages, I wasn’t sure whether I was on the correct route,” said Kalmer.

In the men’s 10km, some of the front runners were misdirected onto the marathon route and missed out on podium spots as a result. This race was won by Frik Guys from the Nedbank Running Club.