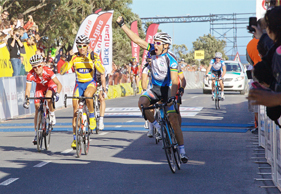 For Malcolm Lange, the title of one of South Africa’s cycling legends is well deserved. In his almost 20 years as a professional cyclist, Malcolm notched up 409 road race victories and took top honours in all of the country’s biggest races several times, including the Cape Argus Pick n Pay Cycle Tour, the Momentum 94.7 Cycle Challenge and the Amashova Durban Classic.

It all started with a surprise victory at the Amashova when he was just 17 years old, after which he competed at the Olympic Games in 1992 and became a professional cyclist in Europe for four years. He then returned to South Africa to focus on the local cycling scene. Back home he dominated road racing, wracking up the national titles and representing South Africa at the Commonwealth Games and the All Africa Games, amongst others.

When asked about highlights in his racing career, it soon becomes quite a long list, but one event that stands out is his victory at the Cape Argus Pick n Pay Cycle Tour in 2010, when he outsprinted an elite group of 12 cyclists – including Lance Armstrong – to take first place. Earlier this year, he made a fitting last appearance as professional cyclist at the same race, where he was beaten by Tyler Day, one of the youngsters in the cycling team he now owns, Team Bonitas.

FROM CYCLIST TO OWNER
After retiring, Malcolm has been putting all his focus into building his team and developing young talent as well as managing his sports management company, Lange Sports. Naturally, for someone who was used to spending at least three hours training on a bike each day, he had to find something to keep himself fit, but which does not take up so much time and allows him to work a fulltime job. He turned to running.

“Honestly, I didn’t do any running when I was still cycling competitively because I felt it didn’t complement my cycling, but at the moment I run because it’s more effective,” says Malcolm. “I don’t have time to spend two or three hours on the road and usually do a 6km run in the morning, which takes me about 25 minutes. My wife, Jackie, got me into it, and though I feel my lungs can keep up, my joints are taking some strain, but it’s nothing serious, it’s just a completely different set of muscles and I need to get used to it.”

CITY2CITY
Though he says he’ll never stop cycling, Malcolm has already run his first race and is planning on taking on a half marathon soon. He recently ran the Bonitas City2City 10km in a time of 45:43 and says it took him almost four times as long to finish the distance on foot than it takes him on a bicycle, but that he enjoyed it. And who knows, maybe we will see him crossing the finish line at many more races in the coming years.