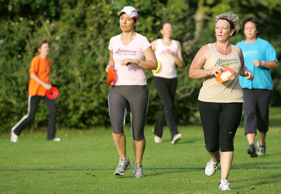 I remember from a very young age wanting to be a professional netball player. I really enjoyed playing all sorts of sport and being active. However, when I reached high school I was not selected for the first team. This was extremely frustrating to me, but I kept my feelings, anger and frustration to myself. My weight started increasing from around Grade 11.

Luckily, in my final year in 2003, my dream finally came true and I was selected to play for Western Province. However, in my first match I injured my knee and could not play for almost a year. That is when my weight really started becoming a problem. I was used to training four days a week and playing netball matches every weekend, and all I could do was watch from the sidelines.

EMOTIONAL EATING
Again I felt frustrated, angry, and what I now see and understand as emotional eating is exactly what I started doing. I could not put any impact on my knee. I really did not see myself swimming, so I did no exercise and thought the world was against me.

I hardly played any netball at college because of my injury and was always afraid I would hurt myself again. I then started working, where almost eight hours of my day involved sitting at my desk. Deep inside me I still had this passion and drive to want to play netball again, get fit and healthy. But as the months went by, I just started picking up more weight. Family members kept telling me I should watch my weight. I would burst into tears and out of anger I would go buy an ice cream, chocolate or pizza and ‘deal with it.’

TRIED AND FAILED
In July 2008 my husband proposed. At this point I was almost 20kg heavier than when I started working in an office environment. I tried and failed at many diets, so I did not lose the weight, look as pretty or wear the wedding dress I wanted on my big day. I was unhappy, I could not fit into clothes, I started feeling shy around my own husband and I kept asking how did I let myself go. I needed help but was too afraid to ask.

Then in May 2010 my netball coach from primary school was coaching the Western Province Women’s team and asked me if I wanted to tour with them as the team manager and help out on Saturdays. It was while flying back with the team that I noticed the Adventure Boot Camp for Women advert in a magazine on the plane and decided to join for the winter special for June and July 2010.

MY WORLD CHANGED
My world changed and I was looking forward to each and every session. I noticed that I started feeling fitter and lost about 3kg. I then had an appointment with my gynaecologist as my husband was keen to start a family. To my shock she told me I was obese and an extremely high risk. Pregnancy at this stage could cause many complications for me, such as Type 2 Diabetes, still birth and hypertension. She wanted me to lose at least 30kg first. It felt impossible and I was even embarrassed to tell my husband how much she wanted me to lose.

At this point I knew I could not continue with the lifestyle I was following. Being selected as one of the Nutren Activ Adventure Boot Camp finalists changed my world. I now know that following a healthy eating plan combined with regular exercise is the only way to find balanced happiness and sustainable life changes. and look after myself. Most importantly, I have realised that at some point we will all feel we are not accepted or we won’t get what we want. However, this does not mean your world has to end, or that you need to punish yourself, as I was doing. I dealt with stress by eating comfort food. There is help out there and people will be supportive, so reach out to speak to someone. Don’t make the same mistake as I did.

BABY TIME
I have spoken to my gynaecologist and she is extremely happy with my progress. Not only because of the weight I have lost, but with how my BMI has dropped, including my body fat, which is most important because this means I’m becoming healthier. I have the go ahead to start trying for a baby in January, provided I’m down to 80kg. My goal weight is 70kg and I have no doubt that I will achieve this.

As the challenge winner, I have won a year’s subscription to Adventure Boot Camp and I will be training five days a week. I think even if I did not win the challenge, that I would have definitely continued attending Boot Camp. I enjoy being outdoors, working in a team and in small groups. I feel encouraged, motivated and inspired after attending class, which is not something you can easily say after walking out of the gym on your own.

In the near future I will be following my dream to educate, support, train and motivate women. Then, finally, I will achieve my most important goal, of being a healthy weight to conceive and start a family, and I know that my child or children will learn healthy habits. What an amazing gift!

For more about Adventure Boot Camp, call 021 447 2746 or go to www.adventurebootcamp.co.za