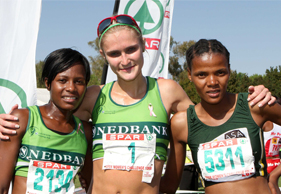 It was a day where the majority of the country decided to stay in and watch the Springboks take on the Wallabies in the World Cup quarter-final, but this did not deter thousands of runners from making their way to Old Parks for Joburg’s most beautiful race. And it turns out they made the right decision, because not only was the rugby heartbreaking, but the race once again showed why it keeps growing every year.

ELITE RUNNING
At the front of the field, Irvette van Blerk from Nedbank CGA showed she was determined to defend her title as Spar Grand Prix winner as she took the lead from the start, never once looking like second place was an option. By winning in Johannesburg, Irvette confirmed her status as South Africa’s queen of the 10km and walked away with R60 000 as winner of the Grand Prix. Earlier in the year, she also won the Durban and Pretoria legs of the Challenge, and finished second in Port Elizabeth and fourth in Cape Town.

In Johannesburg, second place was taken by another Nedbank athlete, Rutendo Nyahora, while third went to Gauteng Striders’ Lebogang Phalula. After the race Irvette, said she had a good run, even though it was a tough course. “I decided to go hard because I knew if I won the Grand Prix, but didn’t win this race, it would be an anti-climax. So I decided to go all out, and then if I didn’t win, I would know I had given it my best. I thought that maybe the new course wasn’t as hilly as last year, but there was a big surprise waiting for me at 8km.”

Nevertheless, she hung on and kept pushing until she crossed the finish line in a time of 34:22, almost a minute ahead of Rutendo. Irvette said she will now focus on the marathon distance in order to qualify for the Olympic Games next year in London, so next year we could have a new Grand Prix champion.

FUN FOR THE MASSES
While Irvette and company took things very seriously the race was really about the thousands of mothers, grandmothers, daughters, sisters, wives and girlfriends (and of course their dubiously dressed male friends) further back.

The field was even bigger than last year and a record 10 534 runners and walkers took on the challenge on a glorious summer’s day in Johannesburg. With entertainment from local band DENIM, a kiddies corner to keep the young ones happy and all-round family fun, it was a day not to be missed. Not even the disappointing rugby developments on the big screen could spoil the fun! And with R40 000 raised for the designated charity, Reach for Recovery, the Johannesburg leg of the SPAR Women’s Challenge was a massive success. Something not to be missed next year!