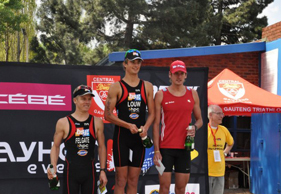 Despite a nippy morning and cool water temperatures at around 17 degrees, the rac got off to an impressive start, with the Sprint (half standard distance) followed by the Mini, and then the Olympic distance main race going off last at around 10:30am. Into its sixth year, the race had found a new home at the Gauteng Aquatics Club on Victoria Lake, providing a fast and spectator-friendly route, including the run taking place on the internal road within the lake boundary.

With the women going off first, Lucie Zelenkova of the Czech Republic led through the first lap of the swim and consolidated her advantage to lead Carlyn Fischer out of the water after the second lap. In the men’s race, Namibia’s Abrahm Louw quickly made up time as the second man out of the swim. It wasn’t long before he assumed the lead on the non-draft bike leg, taking advantage of the full road closure to get the best line. He also progressed past Zelenkova to be first in and out of the bike-run transition.

Louw was followed into transition by Erhard Wolfaardt, while in the women’s race, Riana De Lange was now chasing Zelenkova, Fischer having experienced bike troubles that ruled her out of the race. Zelenkova had a substantial lead coming off the bike onto the run. Louw meanwhile, looked fluid throughout his assault of the four-lap run course, adding to the almost one-minute lead he enjoyed over Wolfaardt after the bike leg. The Namibian has his sights set on qualification for the London Olympics in 2012, with one guaranteed place on offer for an African Athlete other than from South Africa.

His form showed as Louw won by nearly two minutes from Wolfaardt,with Chris Felgate third. Felgate, who represented Zimbabwe at the Beijing 2008 Olympics, is arguably the greatest challenger to Louw for the African spot in London. In the women’s race, Zelenkova won by just under five minutes from De Lange, with Dianne Emery a further minute back in third.

The next event in the series, on 5 February 2012, will also serve as the Central Gauteng Triathlon Championships, with the final leg on 1 April 2012. Points accumulated over the three legs will see an overall champion crowned, as well as the champions across the various age groups.