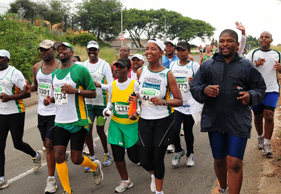 Last year, entries for the Dis-Chem Half opened in late November and by Christmas the 6 500 entries were sold out! More reason to get your entry in as soon as entries open on 1 November.

EARLY BIRD INCENTIVE
More good news is that if you enter before the end of November, you stand the chance of winning a pair of Saucony running shoes. The winner will be announced in the January Edition of Modern Athlete, which is the official media partner of this fabulous race.

TRAINING
This month we bring you the second of our easy-to-follow training programme geared towards novices who want to run their first half marathon. Make sure you get all Modern Athlete editions up to January to help you cross that finish line on Sunday 15 January 2012.

Get the November training programme here.

PACESETTERS
The Modern Athlete pacesetters will be on the road on race day, so if you are looking to run a sub-2:00 or a sub-2:30 time, look out for their recognisable flags and join the bus to the finish line.

DOING IT FOR CHARITY
By entering the race, you will also be contributing to two very important causes: CANSA and the Namaqua Dog and Donkey Foundation are the official event charities. The Dis-Chem Foundation will once again match all donations from race entrants, over and above entry fees. Almost R60 000 was raised this year and the aim is to double this figure in 2012!

THE COACH
Ray Orchison has run five Comrades Marathons with a PB of 7:18 earlier this year. He was club captain at BCC from 2009 to 2011 before he moved on to become captain the Bedfordview Performance Squad.