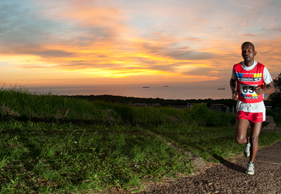 The annual carnival programme in tourist destination Umhlanga on the KwaZulu-Natal coast has always been much loved and a huge success, but Peter Rose, Chairman of the Umhlanga Tourist Centre, decided it needed something different. So in addition to the usual surfing, fishing, beauty competitions, beach sports and music shows, Peter felt that trail running would be a popular attraction for tourists, especially those visiting Umhlanga Rocks over the main holiday times.

So, Peter made contact with Buzz Bolton of the Riverside Sports Trail Club in Durban North and together they organised three trail events, which are now regular events on the trail running calendar. The success of the series has been attributed to the cooperation of the Breakers Hotel, the Tongaat Hulett Group, the Urban Improvement Precint (UIP) unit, Durban Metro, Netcare 911, Thule, Salomon and helpers from the nearby Blackburn Township. Trail walking has been included in this event and a 12km route has been offered as an option alongside each leg.

LEG 1: UMHLANGA SUMMER CARNIVAL 18KM TRAIL RUN AND 12KM WALK
Date: 18 December 2011
The inaugural race was staged on 19 December 2010 when 150 pioneer runners experienced this challenging course for the first time. The route can be described as challenging and slightly technical, but quite manageable for the average athlete.

LEG 2: UMHLANGA EASTER CARNIVAL 16KM TRAIL RUN AND 12KM WALK
Date: 9 April 2012
This very popular route includes the crossing of the Blackburn Township footbridge and a serene forest section, as well as a road section surrounded by reeds and the shrill sounds of birdlife. Like the Summer Run, it finishes on the Umhlanga beach before entering the Breakers Hotel finish line. The field is limited to 250.

LEG 3: UMHLANGA WINTER SUNSHINE CARNIVAL 12KM TRAIL RUN AND 12KM WALK
Date: 7 July 2012
This is the last leg of the series and gives runners a welcome break to start at 7am instead of 6am. Conditions are ideal for trail running in July, as it is not only cooler, but the undergrowth is at a low. At this point too, Comrades is done and dusted and many runners who may have been a bit protective of their bodies can enjoy this last leg. The route is slightly shorter to accommodate the busy cane cutting season, which peaks at this time of the year.

“We at Riverside Sports Trail are grateful for the support that the Umhlanga Tourism Centre, Salomon, The Breakers Hotel, the Tongaat Hulett Group and the many subsidiary sponsors and participants have given to put this fast-growing sport of trail running on the map in KwaZulu-Natal. We hope that up-country visitors will try and fit these trail runs into their getaway plans,” says Buzz.

For more information, contact Hildegard Bolton on 031 562 1153 or buzzhilde@vodamail.co.za