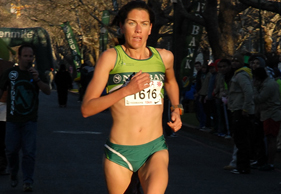 Ren? Kalmer was in top form at the Durban leg held on 31 July, crossing the finish line at Kingspark Athletic Stadium in a winning time of 33:28. Tanith Maxwell claimed second place, while Christine Kalmer finished third. Ren? then continued her winning streak at the Stellenbosch leg on 9 August by clocking a blistering 34:04. “We received the most amazing support from the spectators, with students actually coming out in their pyjamas to motivate us,” says Ren?. Zintle Xiniwe came in second, while Bulelwa Simae finished third.

Lebo Phalula was the lady to beat in Johannesburg on 9 August. She completed the 10km in solid time of 35:50. However, the win came as a complete surprise to Lebo. “I didn’t expect to win as there were so many elites competing,” she says. Irvette van Blerk came in second, while Onnele Dintwe finished third.

The Nedbank Green Mile was a hive of excitement at all three races, with runners and walkers receiving support from the likes of musicians, cheerleaders, dancers and more.

A portion of the entry fees from the three different races was donated to the Jes Foord Foundation, an organisation that offers free counselling and support for rape victims, the JAG Foundation, South Africa’s leading sports and education organisation, and Nanga Vhutshilo, a community-based positive life programme that focuses on people living with HIV and AIDS.