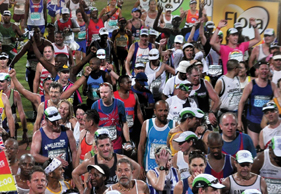 Anyone who has run a couple of Comrades knows how the Big C journey starts: You line up for your first Comrades promising yourself to do this race just once, even if it is just to say “Been there, got the T-shirt.” Then, once you have crossed the finish line and the pain subsides a couple of days later, your mates start telling you that you aren’t a true Comrades runner if you’ve just done one – you have to run the Up AND Down races first. And so it all starts again. Before you know it, you’ve done three, then five, or even 10 Comrades Marathons! Quite an accomplishment, but many runners choose to stop when they receive their coveted green number after 10 runs. There are some, though, who carry on, and today it is not uncommon for some to proceed to 20 or even 30 Comrades.

Most of us will therefore agree that to run 40 Comrades is an amazing accomplishment, but to run them all in a row, without missing one single year, is a feat that not many people in the world can match. The one man that is planning to create history by running his 40th in a row in 2012 is the legendary Barry Holland.

LET’S CELEBRATE!
In celebration of this great achievement Modern Athlete has teamed up with Barry in a once in a lifetime journey that will give YOU the opportunity to not only train with a legend in the months leading up to Comrades, but to run this iconic race and cross the finish line with him. This is an ideal opportunity for especially novices wanting to run their first Comrades as well as former Comrades runners thinking of making their comeback to road running. What a privilege it will be to finish such an iconic race with someone who has run 40 of them!

THE PROGRAMME
Starting in our November edition and running till the Comrades, Modern Athlete and Barry will provide you with a monthly Sub-10:30 training programme, a very achievable finishing time for most runners. In a series of articles you will be guided step by step on exactly how to train, which pitfalls to avoid in your journey, as well as some handy tips from the master himself plus a guide to which races you should be focussing on in your build-up to the Comrades.

Modern Athlete and Barry are planning to create one of the biggest buses that has ever been seen at any Comrades race. So now is the time to decide if you want to commit to Comrades 2012, join Barry’s bus and become part of history.

Closer to Comrades Modern Athlete and Barry will also be hosting a series of workshops where you can gain valuable advice and learn everything you need to know to get you across the finish line at Comrades 2012!

BARRY’S TIPS FOR OCTOBER
• Decide NOW if you want to run Comrades. January is too late, especially for novices wanting to tackle their first Big C.
• In the month of October you should be running at least three to four times a week.
• Don’t focus too much on distance or time, just try to be consistent and pitch up for your runs.
• In November we will increase your weekly number of runs and will provide you with set distances.
• Ideally we will get you ready to run a 32km in November or a marathon towards the end of the year.
• It will be to your advantage to go into January with a marathon under your belt.
• Let your family and friends know that you are planning to run Comrades and get their support now.
• Entries have already opened. Enter now and commit to this Ultimate Human Race.

LOOK OUT FOR NEXT MONTH’S EDITION OF MODERN ATHLETE WITH THE FIRST OF THE SERIES OF TRAINING ARTICLES!