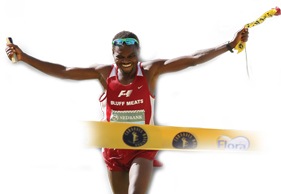 On 21 June this year, less than a month after winning his third consecutive Comrades Marathon, Stephen Muzhingi received news that he had been waiting months to hear and made him grab his phone and ‘tweet’ “Hot news! Just got confirmation that I have been invited to run the New York Marathon, a dream come true. NY, NY – Gonna eat a big apple!”

Only the world’s top elite marathoners are invited to run New York each year – everybody else has to try to get one of the highly prized entries, with thousands upon thousands turned away each year. But thanks to the persistent efforts of his manager, Craig Fry, who had been negotiating with the New York Road Runners (NYRR) since January to secure Stephen’s elite invite, he will be lining up at the front of the race on 6 November.

“I have never had the speed to qualify for this status, but since winning three Comrades, I have been included. I have a sub-2:20 marathon time but have never really raced a marathon properly, so this will be a true test for me. My aim is to run a 2:10 or faster, which I know I can do, and all I can say is thank you to NYRR for the invitation, and to Craig for making this happen for me.”

RUNNING FOR MOM
Stephen was due to run in Switzerland in September, but had to cancel those plans when his mother fell seriously ill. Sadly, she passed away a few weeks later. Stephen says it was very hard to lose her, and he wants to run New York in her memory. “My family sacrificed a lot for me to get to where I am now, so it is sad that she won’t be able to see me run my first race outside of Africa. But I will give my best for her.”

“My training took a back seat while she was so sick, but I was in decent shape already, so it shouldn’t be a problem. Also, I ran at a high pace for a longer period than I would normally in this year’s Comrades, because I was making sure Fanie Matshipa did not get away from me, so I know I have the stamina to run 42.2km a higher pace.”

GOING FOR FOUR
After New York, Stephen says his focus will return to the Comrades, where he will be chasing a fourth consecutive win in 2012. The only other runners ever to manage more than three wins in a row are Arthur Newton (four) and Bruce Fordyce (eight), and Stephen is aiming to join this select club, but he also has his sights set on another goal. “Most of all, I want to break the Down Run record. In 2009 I ran the second-fastest time ever, 5:23:27, and the record is Leonid Shvetsov’s 5:20:49 from 2007. I know I have it in me to do it.”