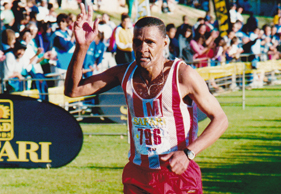 At the end of September, a tall, thin runner wearing the blue and white of Western Province and a determined look lined up in the 6km race for men aged 60 to 64 at the SA Cross-Country Champs in Bloemfontein. Awie Veldsman was there to defend the national title he won in 2010, and he expected to see his usual rivals, the “Two Mikes,” alongside him – Mike Hirst from Central Gauteng and Mike Du Bruto of Gauteng North. Instead, he found himself being challenged by Eric Quibell of KwaZulu-Natal in a tactical race that went right down to a final sprint, with Awie winning in 23 minutes and 50 seconds and Eric crossing the line two seconds later.

“I had never run against him before, so didn’t know what to expect, but relied on my sprint speed to win it,” says Awie. “One of the guys had opened a big gap on us in the first lap, but I decided to let him go because I thought he would fade and come back to us. In the second lap we caught him and then I just did enough to stay ahead of Eric and save something for the finish. Then with 100 metres to go I kicked.”

Awie was delighted to retain his title, but says he felt the pressure. “The guys know me now and everyone wants to beat you when you’re the champion. At national level, the grandmaster category is very competitive these days, because more top runners are staying in the sport longer, having built up years of experience, so it’s the guy with the strongest mind that will win. And we always have the mind games, talking about how unfit or tired we are!” laughs Awie. “But despite being so competitive, we get along very well, and no matter the result, we always shake hands and wish each other well after a race. So after the race in Bloemfontein, I chatted to Eric and he said he’d come to the Champs to win gold, so now he’s looking forward to the rematch in Durban next year.”

SPORTING GENES
Born in Worcester and raised in the Strand, where he worked for Somkem and Denel, Awie (61) is now retired and still living in the Strand, with all six sisters and three bothers living nearby. He says that his sporting genes are very much a family trait. “My grandparents and parents were sporty, as were all my brothers and sisters. Three of my sisters were good sprinters, with Elizabeth earning Western Province colours. Another sister, Miena, made the national Proteas netball side, in the days of segregated sport, and played against England.”

“I began running at school and held numerous records in the 100m and 200m sprints. I also played wing in rugby, and after school I continued to play for the St Georges club in Strand, where I won many club prizes and was selected for zonal teams. But running was always my big interest, and when I gave up rugby just before I turned 30, after a collarbone injury, I took up running again. I was also motivated by the fact that my sister had provincial colours and I didn’t… yet.”

RUNNING SUCCESS
Awie joined Helderberg Harriers in 1979 and still proudly runs in the club’s distinctive red and white stripes, but says he was never a prodigious racer. “I usually only did five or six races a year, choosing the ones I wanted to do well in and concentrating on training the rest of the time, but I always did all the cross-country races.” He earned Western Province (WP) colours for the first time in 1984, going to the SA Half Marathon Champs, and went to another three 21km Champs and two 15km Champs while still running in the senior category. He was also selected for the WP Cross-country team for the SA Champs for the first time in the mid-80s and has been selected every year since then! “I only missed one or two SA Champs due to illness or injury, but I was always selected for the team.”

In 1988 Awie won bronze in the sub-veteran (35-39) age category at SA Cross-Country Champs, and when he reached the veteran ranks (40-49), he was a regular podium finisher at provincial and national cross-country champs, but a national title still eluded him. When he moved up to the master category (50-59), he regularly won not only the WP Cross-country Champs title, but also the provincial road titles for 10km, 15km and 21km. Then in 2007 he made it to the top step of the podium when he won the 55-59 category at the SA Cross-country Champs, and a year later added another bronze to his collection.

But it was in 2010 that Awie really reached his ‘golden years’ in terms of running, and he says the last two years as a grandmaster have been the highlight of his running career. In 2010 he won the WP and SA 10km titles, as well as the WP and SA Cross-country titles. And now in 2011 he has done even better, retaining the provincial and national titles at 10km and cross-country, and also adding the SA Half Marathon title!

IN IT TO WIN IT
After all these years, Awie says he still loves running. “When I can’t run, I feel like I have missed out on something, but I actually don’t train that much, just do quality work, so I am never overtrained.” He attributes his success not just to fitness and natural speed, but to strength of mind. “I like to watch other runners, so I can quickly sum the other guys up, find their strong points or weaknesses with a bit of surging, which tells me if I can beat them. And the tougher the race and stronger the competition, the more I like it. I don’t like just running to finish, I want to race hard! Then you know that when you get a medal, you really had to work for it. That is so much more satisfying.”