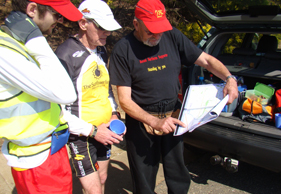 After running the Comrades nine times, Philip Waudby began to wonder why he does it to himself, and he realised he needed a cause to stay motivated. That was also when he heard about the KAEM and he decided to tackle the Kalahari for a cause. “That’s just me, you know. If I can make a difference in someone’s life, I’m happy.” Since then, Philip has finished this gruelling race three times. The first time in aid of the Red Cross Memorial Children’s Hospital and the second and third time for the Starfish Foundation. In total, he raised R130 000 for these charities, but this year Philip has decided to take his fund-raising to the next level.

SUNFLOWER FUND
The charity he chose this year is the Sunflower Fund and it is a cause that lies especially close to his heart because his mother, Joan passed away from Leukaemia in 2002. The Sunflower Fund is committed to increasing the South African Bone Marrow Registry by raising funds to pay for tissue type tests for those who cannot afford them. By getting more people on the registry, it increases Leukaemia-sufferers’ chances of finding a donor that can help them in their fight against cancer. And, according to Philip, if he can increase their chances of recovery just marginally, he’ll be satisfied. He is aiming to raise R1 million this year and has expanded his challenge exponentially to reach this figure.

THE PLAN
This year, Philip will not only be running the 250km of the KAEM, but before the race even begins he will run approximately 1 000km from Benoni to get to the start. He’ll set out from the Benoni Northerns Athletics Club on 25 September, run approximately 80km per day for 12 days and reach the Augrabies Falls Lodge two days before the race starts, if all goes according to plan. Then he will still run through the Kalahari Desert with the rest of the field before returning home – in a car. All in all, that will equate to approximately 1 190km in 19 days.

Philip says he has had immense support from his family, friends and fellow club members, but preparing for this immense challenge has been especially difficult because his wife and biggest supporter, Alison, passed away recently. They were supposed to take on this challege together, with her accompanying him as support on the road, but Philip is determined to carry on, not only for the Sunflower Fund, but also in her memory. “Failing is not an option. There’s no way that I’m not going to finish,” he says.

It goes without saying that the logistics in planning and executing a journey such as this are enormous, and Philip says he would not have been able to get this far without the help of his support team and close friends, Michelle and Theo Harding, Pat and Vick Shaw, Robert McClaine, Colin Rothery and Rennette Crock. They will also be accompanying him on the road to the Augrabies. Furthermore, he would like to thank Wessel’s Caravans Hire, ER24, Xtreme Trackers, Flora Margarine and GU Energy products for their support.

SUNFLOWER SUPPORT
You can track Philip on his journey to the Augrabies on www.xtremetrackers.co.za and you’re welcome to give him a call while he’s on the road. Phone him on 083 715 6098 for more information, or just to give him a word of encouragement. If you would like to contribute to the Sunflower Fund, you can sponsor Philip on his journey or simply make a donation to the Sunflower Fund (see details below).

Sponsor Philip:
Go to www.backabuddy.co.za and search for Philip Waudby.