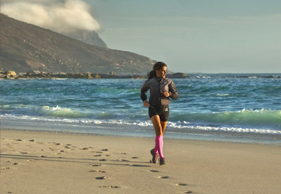 Most people would say that Marilu Mathee and Dave Chamberlain are a bit crazy to tackle more than 5 000km of running in a strange country. But their reaction to this definitely puts things into perspective: “I would hate to get to the end of my life and realise I could have experienced so much more out of life if I just dared to get outside of my comfort zone. So I say I would be crazy not to do this,” says Marilu.

Dave describes his motivation as pretty simple. “I think people spend too much time sitting in little concrete boxes, too scared to actually get out there and to do something amazing with their lives. Instead, we spend a large portion of our existence getting frustrated in traffic jams, working for an unappreciative boss and playing catch-up with the ‘Joneses.’”

THE PLAN
Marilu and Dave, who came up with the idea, will be running together as a team, and although there have been many longer runs around the world, this particular route has never been run in this way before and they will be the first to attempt it.

The run starts middle July and the plan is to run 160km a week (roughly 26km a day) down the well-known RN40, a tarred road that spans North to South along the Western flank of Argenitna before it rises to meet the Andes mountain range. They are planning to run six days a week, taking the seventh day to rest and recover. Every six weeks they will take off a further week for rest. The run starts at 3 000m altitude and climbs to 5 000m. To make it even more challenging, they start their run in mid-winter, but they have secured a camper van for the trip.

The World Wide Fund For Natures South Africa (WWF-SA) is supporting their offer to promote awareness for WWF’s Africa Rhino Programme. “The WWF is not sponsoring the trip, but gratefully accepting the offer to create awareness for the rhino programme. Africa is experiencing a ferocious resurgence in rhino poaching, caused by illegal demand for rhino horn from Asia. South Africa, the stronghold of Africa’s rhino population with more than 80% of the 24 000 rhinos left in Africa, is now losing more than 20 rhinos a month. If the current trend continues, the rhino conservation gains of the last decade will swiftly begin to erode,” says Dr Morn? du Plessis, Chief Executive Officer of WWF-SA.

Another charity leg of the run is to create awareness for the jaguar population in Argentina. Locally called yaguaret?, or “tiger,” the jaguar is the top predator on the South American continent. Due to the rapid loss of tropical and subtropical forests, and illegal poaching, the jaguar population has severally declined over the last decades.

MEET THE TEAM
Marilu found her passion for life at the age of 30. With a heart for people and a love for the outdoors and being active, she started her own business called FROM MONDAY Corporate Fitness, focussing on improving employee health and wellness in order to increase overall productivity. Her favourite discipline is running, as it has been her remedy to overcome fears, failures, heartbreaks and loneliness. Running is also her way of celebrating being alive. “Running is so diverse. It creates awareness to possibility.You name it and it all starts with running.”

Dave describes himself as a slacker, scuba dive instructor, farmer, plumber, barman and traveller. He sees himself as an amateur/fun athlete with no desire to compete in races, but humbly admits that he has hiked in the Andes, Alps, Pyrenees and Drakensberg, and across Iceland! “To watch me running is like watching an epileptic jellyfish. But if I can do this, then there is a whole bunch of other jellyfish out there that can also do this! Basically, I want to try and get people to be more proud of themselves than of their Rolex watches.”

AN UNKNOWN ADVENTURE
They realise that to most people their adventure sounds completely crazy. “What we are about to do resonates with who I am and my values, my passions and my desires for my life. I am frightened by the task ahead, but I know I can do it,” says Marilu.

Dave wants to convince normal, average people that they can also go out there and stretch their personal boundaries. “Then I think that a lot of the issues we face with regards to the health of the planet and society would be addressed simply because one’s perception of what really is valuable will guide us to more sensible solutions to our needs as a society. I’m not asking people to run 5 100km. I’m hoping to challenge people to say to their bosses ‘sorry mate, I’m taking time off to do something fantastic. I want people to do something that they can one day turn around and be proud of, and say; ‘At least once in my life, I experienced something amazing, and I made a difference.’”

FOLLOW THE JOURNEY…AND BECOME INVOLVED
A journalist in Argentina will be covering Marilu and Dave’s journey along with a TV crew who will be filming it. The team would love more exposure and would welcome any company that would want to be involved in this project, which will yield excellent results for the conservation initiatives they have chosen to support.

Via their satellite connection, the team will be in contact with a South African project manager who will be doing weekly blog updates on http://runargentina.wordpress.com and www.frommonday.com. At both sites there will be a Facebook link where you can follow their progress. For more info, or to become involved, contact Marilu at marilu@frommonday.com.