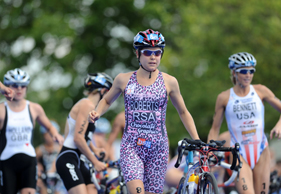 Born and bred in Bloemfontein, Kate loved all things sporty from an early age. She started running at 11 and earned provincial colours for cross-country within a year. Provincial colours for middle distances, road running, biathlon and swimming followed, as well as national colours in biathlon. When she was 17, she switched to triathlon when the sport was accepted as an Olympic sport. “I first thought that I would try to compete at an Olympic Games as a track athlete, but when triathlon made its debut at the Sydney Games in 2000, I realised all I needed to do was add cycling training to my swimming and running combination, and then perhaps I could fulfil my Olympic dream. I started competing in triathlons that year and have been hooked ever since.”

She was very successful on the local triathlon circuit in her first five years, but it was only in 2005, after completing her B.Com degree at the University of the Free State, that Kate entered the international professional circuit. She qualified for the Olympics in 2008 and managed 32nd place, but it was in 2010 that she really turned heads as she achieved fantastic results on the International Triathlon Union (ITU) circuit. In that year’s World Championship series, she never finished lower than 12th, with her best results being fourth place in Hamburg and at the Triathlon World Cup in Australia. This successful run started when she won the African Triathlon World Cup event for the first time in 2009, becoming the African Triathlon Champion and defending her title successfully in 2010 and 2011. Unfortunately, 2011 has not been as successful and Kate is working hard to get 2010’s form back in time for next year’s Olympics.

TOUGH TIMES
Kate admits it is hard to stay motivated sometimes, especially when things aren’t going her way. “It certainly has been a challenging year for me and I cannot pinpoint the exact reason why I am not racing as well as last year. I took four months off after the World Champs Final in Budapest last year, as I was injured, burnt out and demotivated, so I think it is just taking me a bit a longer to find my form again. In hindsight, this may be the best thing for me in the lead up to London, because if I continued to have the same form I had last year, I may have been burnt out by the time I got to London. I am definitely improving each day, but I have had to adapt my goals for 2011, and it has made me realise how fortunate I am to be living my childhood dream.”

It is Kate’s determination to succeed that has been the difference between being good and great. “I believe anyone can be anything that they want to be with proper motivation, hard work and discipline. I think exceptional people have a special talent for identifying their strengths and weaknesses, and can convert setbacks into future successes. This year in particular has been a disappointment compared to the breakthroughs I had last year, but I don’t see myself as a failure and I know that I just need to keep fighting hard. I believe that a true champion is one that can pick herself up from the difficult times.”

THE LOVE OF THE CHALLENGE
Now based in Australia and Switzerland after growing up in a tight-knit family, Kate admits it is sometimes difficult to be so far away from her family for so long, but she is still happy with her career choice. “I can honestly say that I really love my job and am passionate about what I do. It is very challenging racing on the professional circuit, as each year the level of racing gets tougher and you have to continually search for ways to improve, but I love the challenge. It is so tough to make sure that all three disciplines are on form and there are always areas where I need to improve. I also love the travelling and the camaraderie between the girls that I race and train with, but most of all I love the feeling of being fit and healthy, and the satisfaction of doing well in a race. It is difficult to describe just how awesome that feels.”

Kate says she wanted to be a professional athlete for as long as she can remember, and can’t imagine doing anything else. “It sometimes feels like I’m focussed on triathlon 170 hours a week, even though there aren’t that many hours in a week! Once I break down swimming, cycling, running, gym work and other technical drills, it works out to around 30 hours of physical activity a week. My naps are very important to me, so I always put aside at least two hours a day for nap time. There is just something so appealing about inactivity to someone who is forced to be energetic for a living! Of course, I get those days when I am extremely tired and just want to stay in bed, watch movies and eat chocolate, but I don’t have too many of these. On the whole, I love training.”

2012 AND BEYOND
The 2008 Olympics was one of the highlights of her career, says Kate. “To me, the Olympics remain the most compelling search for excellence that exists in sport, and maybe in life itself. I consider being an Olympian very special and something no-one can take away from me. I was able to achieve my childhood dream by competing in Beijing and it was an absolutely amazing experience, but I believe that I can improve on the 32nd position I achieved, so I am giving everything to get to the start line on 4 August at Hyde Park.” However, Kate says she does not just want to make up the numbers in London. “I am working hard towards an Olympic medal next year. I realise it is going to be a tough task, but anything can happen on the day and I certainly will be fighting hard to get onto the podium and make my country proud.”

While her focus is on London at the moment, Kate finds it exciting that she doesn’t know what she will be doing after that. “I aim to do what makes me happy in life and live with no regrets. After next year, I will take some time off from international racing and reassess in 2013 if I want to go for the 2016 Olympics. I would like to have more balance in my life post-London, and that will influence whether I can get to another Games or not. I do know I would very much like to get involved in mentoring up and coming female African triathletes, as I believe we have so much talent that is not being recognised at the moment. But at the end of the day, I just want to be happy and have no regrets about my triathlon career.”