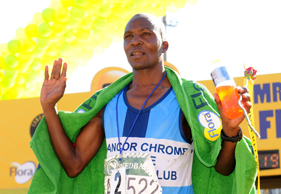 Fanie Matshipa (33) lives in the small mining town of Steelpoort in Mpumalanga. Until recently he was a jockey on the local golf course but now works full-time as a maintenance operator at Samancor Chrome, making sure water levels in the mine’s several dams are sufficient. To make time for his training, Fanie combines his daily commute with running and he runs the approximately 10km to work every morning. When going home he takes a slightly different route and covers about 15km during his afternoon sessions. At home, there isn’t much time to train because he spends time with his wife and two young children, but he makes time for long runs on weekends, usually about 40km, or a little less than three hours.

When Fanie trains he is usually alone on the roads of Mpumalanga and has only his own determination to urge him on. Coached by John Hamlett, Fanie receives his training programme every Sunday but remains on his own for most of his running, with no-one shouting words of encouragement next to the road. He joins John’s training group about five times a year for a training camp in the mountains, but John says the fact that he doesn’t see his athlete every day is not a problem. “Fanie is a very committed, determined and fighting kind of guy, and if I tell him to run for three hours, I know he’ll do it. He doesn’t need someone to look over his shoulder.”

THE ATHLETE
After winning the 56km Longtom Marathon earlier this year in a time of 3:39, Fanie arrived in Durban determined to win the Comrades. He had run the Big C four times before, claiming three silver medals and taking his first gold last year when he finished in fourth position. His times had mostly been improving steadily since his first Comrades in 1999, and he was confident of doing even better.

Unfortunately, it was not quite to be, as Fanie explains he did not feel 100% on the day. Despite this he still pushed Stephen all the way to Polly Shortts, matching his every step for almost half of the race as they ran for a long time out ahead of the chasing pack. It was only about 10km from the finish that Stephen managed to pull away from Fanie, his greater experience and strength shining through and eventually being the difference between first and second place. But Fanie is confident of returning next year and claiming the title for South Africa, now that he is more experienced. “With about 30km to go I had to work hard to keep up. It is a tough, tough race and Stephen only beat me in the last 5km. I think I can go faster and next year I want to be back and win the race for South Africa. I want that cup!”

THE COACH
Fanie has been training with John for almost three years now and says his running has improved significantly because of it. “When I don’t train with a coach, I don’t run as well, I need a coach to help me run better.”

John remembers when Fanie first approached him. “He was all over the place at the beginning and it took some effort, but he’s gone from a mid-range athlete to top class. He was really struggling financially back then and couldn’t even feed himself properly at times. He has a fulltime job now and a bit more money, and that has helped him to focus better. Last year he finished fourth at the Comrades after an intense eight-week training programme in the mountains and one year later he came in second. I honestly think he should have won this year, but Stephen wanted it more. Saying that, I think anyone who wants to win the Comrades next year should know that Fanie will want it more and he is going to be a huge threat. He’s very committed and determined, and I have no doubts that he can win it in 2012.”