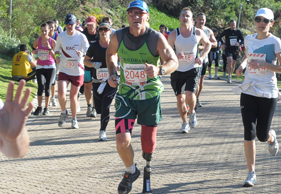 As an avid motorbike enthusiast, Heinz always loved taking to the open road. And so it was no different on 12 March 1982, when he left from Olifantsfontein, near Pretoria, for Bloemfontein on his 750cc Suzuki. But coming round a sharp bend, he crashed into a lamppost at high speed. The impact completely severed his left foot and left him covered in deep wounds after he was flung 20m across a double road, landing in front of oncoming traffic. “I still remember the noise of the engine of my motorbike revving next to the lamppost. Only after a yellow plastic bag was pulled over the badly scarred remains of my leg did I realise that I’d lost a foot.”

Heinz was only 21 years old at the time. Now after such a traumatic accident, many people resign themselves to life with very little physical activity, but not Heinz Mueller. He vowed that his physical disability would not affect the way he lives life. And it hasn’t!

LIFE AFTER THE ACCIDENT
Today, Heinz (53) is the owner of a successful business, High Performance Limbs (HPL), which he manages from his home in George. He sources and imports prosthetic products and components from all over the world and distributes them in South Africa. He has also become an avid road runner. After nearly 25 years of using various prosthetic legs and feet that were fitted as his stump changed and technology advanced, he got his first running blade in 2007. That changed his whole life, as a new world of opportunities opened. “Suddenly I was freed from bondage and all the strenuous activities which previously seemed out of reach were suddenly doable.”

Heinz says immediately after the accident, he had to adapt to not having a leg with which to carry on with his day to day activities. “My recovery was rapid due to bloodless surgery and being strong-willed, but all of a sudden I had to wear a prostheses, a device that I knew nothing about. Suddenly I realised how important it was to have the support of family and friends. Emotionally, I was devastated at first. But through determination and positive thinking, I could see my life continue as normal as possible through the eyes of my three beautiful children.”

He was released after 10 days in hospital, and to his surprise, his first prostheses was fitted only two months later. Unfortunately only nine months after the accident, he had to have an operation for a further amputation higher up, as the wound had turned septic.

GETTING PHYSICAL
Though Heinz decided to continue life as normally as possible, his sporting activities came to a halt. Before the accident he enjoyed a game of squash and tennis with friends, but the accident left him falling into self-pity. Then gradually he started cycling, as it was less impact on his stump and went on to complete the Cape Argus Cycle Tour four times as well as the Karoo to Coast (a gruelling 100km over the Swartberg pass from Uniondale to Knysna.) “That was one of the highlights of my sporting career and one of the toughest mountain bike challenges I’ve done.”

Then he got his first running blade and a whole new world of sporting opportunities opened up. “I was introduced to a running club by a good friend. The blade was comfortable to run with and I suddenly realised the freedom running holds. I always used to do things slowly. Now I could get to places so much faster. My first experience with the blade was like walking on clouds. There was so much more give and response. One must remember that the blade is only as comfortable as how your residual stump fits into the purpose-made socket. You cannot perform or run well if the socket to your remaining leg fits badly and hurts. Luckily, I was fortunate to have my socket sorted and fit well.”

His first day at the running club was a mixture of happiness and disappointment. “I started off with high expectations, but quickly realised that my fitness was lacking and my technique non-existent. I had to walk most of the 3km time trial.” Since then Heinz has completed several road races and tackled his first marathon only six months after starting to run.

THE NITRO RUNNING BLADE
The Nitro Running Blade from Freedom-Innovations is engineered for jogging and running. The blade is individually handcrafted with carbon-epoxy lay-up techniques and is manufactured in the shape of a ‘C’ for comfort and the right alignment to propel the wearer forward. It took Heinz some time getting used to his blade and took a lot of adjusting and alignment tweaking. “It also takes a lot of perseverance to get used to it and to get on track.”

Running with the blade, Heinz gradually built up his running fitness. He started with 3km, building gradually to 5km, then to 10km and 21km. “There will always be some discomfort and pain with longer distances and time spent in the socket, keeping in mind that perspiration is a big factor. Your prostheses, or whatever you use to run with, can only do as well as the trained or sound leg!”

He tackled the Two Oceans Half Marathon for the first time this year and after a difficult start in the darkness, he got into a comfortable stride and finished the race just outside of two hours. “Although the route was crowded all the way, the camaraderie was awesome and I decided to do the 56km next year, where I should have more freedom of space.”

TRAINING
His training week starts with a 6km jog on Mondays on a gravel road into the forest near home. Tuesdays are reserved for time trials at the local Nedbank Running Club in George ,followed by an hour’s workout in the gym. “On Wednesday we take our bikes for an adventuress and scenic 15km route around the George Dam, and on Thursdays I either run a 10km circle route at the Botanical Gardens with club mates, or do a spinning session at the gym.” Friday is rest day and Saturday Heinz will spend with his club doing a long run at different venues, then Sundays it’s back to the gym for some weight training. Heinz also regularly swims, goes on motorbike trips and has even climbed Kilimanjaro!

Heinz remembers when only 10 to 15 members pitched up for time trials in 2007. These days there are on average 65 each week, and the club even boasts its own chip timekeeping system, which gives runners accurate time trialling results. “It is truly a pleasure to belong to such an up-and-coming enthusiastic club and group of people. My running partners are strong, dedicated runners who have also become my personal friends.”

GIVING BACK
Heinz strongly believes in giving back to people in similar situations. “After a visit to an accident victim at a hospital, I realised nothing gave me more joy than to see the encouragement I can be in that person’s life when they see me walking normally with my prostheses and listen to some of my achievements. I will never forget my visit to two partially blind tandem cyclists who ‘looked’ at my motorbike through touching. They felt their way with their hands from the front wheel to the back mudguard whilst expressing their excitement. After starting up the engine they exclaimed: ‘Oh, how we would love to ride with you!’”

Unsurprisingly, he decided to make this a future project. “Our motorbike club will attempt to take each of our blind friends for a ride out in the wind so they can also experience the freedom we so often take for granted.” Heinz also donates prosthetic products through HPL to less privileged people.

Something Heinz feels strongly about is separate starts for disabled athletes at races. “I would love organisers to give thought to a separate category for disabled athletes to compete against each other within a race in some of the bigger marathons, such as the Comrades, Two Oceans and the Knysna Forest Marathon, to name but a few. There are a few blade runners that I know of who would welcome such a change, which would not only give them a chance to run, but also chance of winning or doing well in their respective category.”

AN INSPIRATIONAL LIFE
Heinz believes running is what leads him to discover new places, experience nature and meet new friends. And apart from the fact that he is leaner and fitter since starting running, he feels healthier now than in his younger years. One of his fondest running memories is doing a wheelchair challenge a couple of times, pushing quadriplegics in their wheelchairs through the streets of George. “For me this is a real privilege, to acknowledge that I have only lost a limb.” Another fond memory is receiving the trophy for the most inspiring runner at the 2007 Nedbank Club annual prize-giving.

He is very close to his three children, Imke and Kyle, who work for Emirates in Dubai, and Wernher, who works in Mauritius. “Family can guide you, but you are responsible for your own true power and will to excel. The fact that I can do more than the average person motivates me to carry on. But anyone can compete in sport. By just starting with a gentle 3km walk, you can progress to anything. The sky is the limit. You need to decide, commit, execute and succeed.”

Any blade runners who would like to make contact with Heinz can log onto his BlogSpot www.bladerunners-sa.blogspot.com to chat about common issues which will help improve ‘blade running.”