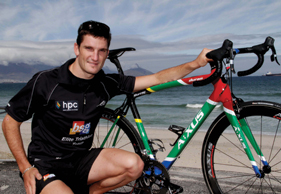 Richard Murray has been competing for years in many different sporting disciplines, and he is clearly talented, but it is his drive, dedication and passion for the sport of triathlon that has seen him grow over the last three years and achieve remarkable results, especially in the last couple of months. And it seems as if this is just the start of things to come!

INTERNATIONAL SUCCESS
Richard’s first big international breakthrough came on 20 June in Germany when he made South Africa proud by winning his first international triathlon in Schaumburg. He followed it up with a fourth position at the Brasschaat ITU Triathlon Premium European Cup a week later, and then to top that off, he was crowned 2011 African Champ at the recent ATU Triathlon African Championships in Maputo on 3 July. Three stunning victories in less than four weeks!

But glory does not come without dedication and a strong mental attitude, as Richard proved with his win in Germany. It was by no means an easy victory, more a gutsy performance that made many realise why he is SA’s hottest triathlete. Firstly, he started in a slower swimming batch before being penalised because he did not put his helmet on in the box in T2. But anyone who knows Richard will tell you he has a winning attitude! With less than 3km to go, he passed 2007 world champion Daniel Unger before surging ahead to cross the line in a time of 1:44:22, with the fastest run split on the day, 29:54 for 10km.

Richard describes his first international win as “major” and says the feeling is on par with the World Duathlon Champs title he won as an under-19 athlete. “Swimming just over 18min, biking about 55min and running a sub-30min for a 10km was amazing for me. I find that I have moved forwards in triathlon in the last three years – and bigger things are to come!”

BORN AN ATHLETE
Richard, who was born in Cape Town and has been involved in sport since an early age. “My love for sport started at about age seven or eight when I was mountain biking with my father. I did every sport I could when I was young – cross-country, mountain biking, duathlon, motorcross, biathlons and biathle. All this led to competing in duathlons between the ages of 14 and 18. I then realised that duathlon was very small, and took up swimming in 2009, but my true love for triathlon only started in 2010 when I started to compete full-time. I find that in triathlon, the variation of sports gives me a lot to think about, and this makes training and perfecting very difficult. I guess you could say I love a challenge!”

His cross-training experiences have definitely helped him develop into the triathlete he is today. “As my father says, if it weren’t for mountain biking and duathlon, I would not have been the athlete I am today. There is a huge amount of bike skill and raw power needed for mountain biking, and leg speed is crucial for duathlon! So I think that these elements have given me a great base to head forwards with triathlon.”

MAKING WAVES
And Richard certainly did head forward! In 2010 he won several titles, including the SA under-23 and African under-23 triathlon titles. And his success was not limited to triathlons – he also won the African and SA under-23 duathlon titles.

He sees his biggest achievements up to now as being crowned Junior World Duathlon Champion in 2007 and 2008, as well as his eighth position in the under-23 category at the World Triathlon Championships in Budapest in 2010, and of course his recent success at elite level in Germany.

A DAY IN THE LIFE
Ever wondered what a day in the life of a professional triathlete looks like? Well, this is how Richard does it. Muesli and coffee is a must to start his day with before he tackles his first training session. This is followed by a late breakfast, a snooze of between one and two hours followed by lunch and a second training session about two hours after lunch. “My sessions are normally a variation of swimming/running or cycling/running.”

Richard trains in 10-day blocks, ending with a track session on a Tuesday followed by four days’ recovery. This is normally done twice a month, with the day after recovery being a race day. “So it’s train, train, rest, race, repeat! I don’t normally have a full day off. But in the days preceding a major race, I take the following day off at times. At the moment, running is my favourite discipline. I don’t have a worst – positive thinking gets me through swimming,” chuckles Richard.

He believes in consistency when it comes to eating habits, but with the occasional treat, of course. “I have the same dinner most nights: Pasta, chicken and vegetables with a ‘condiment’ added, such as fruit, vegetables and dark chocolate. You can’t go wrong with that!”

DREAMING BIG, STAYING HUMBLE
Through all his recent success, Richard has managed to stay level-headed and humble. “I find that keeping humble, focused and dedicated is more important than fame. I love triathlon, and I put in the hard hours when it’s needed. I appreciate all the attention I am getting, but I expect bigger and better things from myself every day. World’s best triathlete is where I’m headed!”

Competing at the Olympics next year is his biggest dream, where the triathlon consists of a 1 500m swim, 40km bike and 10km run, a gruelling, fast-paced event where world class athletes usually complete the event in just below two hours. In order for this to happen he needs to race World Cups and World Championship series races to gain ITU points. “From there I will need to gain a top 20 overall ranking before I will qualify through my federation towards Olympics. To race at the Olympics in itself would be my goal achieved, but once on the start list a top three finish is all I would go for! All or nothing!”

MENTAL FITNESS
These days he does not get that nervous before a race, as he has done so many now that all his experience contributes to making him comfortable with getting to the start line. “But I will admit to still getting a bit nervous in race briefing, and when they say, ‘On your marks,’ followed by the air-horn blast.” However, once he gets going he gives it his all. And when the going gets tough in a race, he tells himself several things to stay motivated. “I tell myself to HTFU… And then I put my head down and do what I can. I find that if it’s not my day, then I pull the cord and save my energy for another day. In triathlon, I have found that if you don’t have the swim you want and you lose a lot of time, then your race is over! But if there is hope, I do all that I can.”

Richard is currently based in Sigmaringen, Germany, till 10 September, as it is easier to get to European ITU cup races from there. “The summer weather here also allows me to train and race all year round! When I’m back home, I train in Cape Town, my ‘home town’, before moving on to Pretoria for altitude training with my coach Lindsey Parry and team mates at the High Performance Centre in Pretoria.”

His favourite local place to race in is the windy city of Port Elizabeth, and of course the Cape Town leg of the BSG Energade Tri-Series. Internationally, it is Brasschaat in Belgium, as the course allows for fast swim, run and bike splits.

Competing internationally takes some time to get used to, but Richard says he has become very independent and self-sufficient. “I have become quite a self-provider when in Europe. I rely on myself for almost everything, apart from flights from ‘Ma and Pa’ from time to time. I love being alone, and stuck in random places trying to get to races! For me, this is fate testing me before something even harder. I think that without lows, I would never appreciate the highs.”

“My parents are my biggest supporters and the backbone of my career. They are always there to help out and to come watch me race, even if it’s internationally! My brothers Collin and Andrew are both IT specialists and also have a track record of athletic abilities!”

A BRIGHT FUTURE
His short-term goals include gaining ITU points to get into the World Cup and World Championship Series events hosted by the ITU. In the long term, he wants to become the best triathlete in South Africa and race at the 2016 Olympics.

Richard is part of the BSG Elite team. “BSG has a new slogan: ‘Unlocking potential and accelerating performance.’ I find that this is very similar to what I am trying to do. BSG is a great sponsor and the team is very organised and focused on delivering great performances around South Africa and internationally. Without them, my future wouldn’t be as bright!”

ADVICE
Richard advises novice triathletes to listen to their bodies and take it easy in times of recovery. “Many athletes don’t know the word easy! It’s not about who is the fastest in training. It’s about who wins on race day.” He says that the most important pieces of equipment a novice triathlete should invest in is a wetsuit and a pair of tri-bars, while experienced triathletes should know that a pair of smooth racing wheels or light racers will help improve efficiency in racing.

According to Richard, the biggest mistake age group triathletes sometimes make is to take it too easy in transition. “I don’t want to put age groupers down, but transitions for age groupers must be the main issue. Many athletes have a picnic in transition. The goal should be in and out of transition as fast as humanly possible!”

INSPIRATION
He is inspired by the joy of being fit and the ability to train every day injury-free. “I find life is a journey and that without setbacks, life would be boring! Sport is my life! Being able to train every day isn’t easy, but I look forward to travelling, meeting new people and living a life less ordinary. Sport is pain, and I love pain.”

Any chances of seeing this great athlete at longer races such as Ironman 70.3 and Spec-Savers Ironman in future? “I will most likely do 70.3 next year. I think after base, a longer race will be great, but I intend to stay with Olympic distance till I am 32 years old, before I make my move across to Xterra in America.”

THE BSG ELITE TEAM
A number of elite athletes recently competed in the first ever championship event on the Maputo shore of Mozambique. The 2011 All Africa Triathlon Championships are held every year and are a chance for elite athletes to earn ITU World Ranking points. Mozambique was chosen as the host country so that the African Triathlon Union could use the African Championships as a ‘test event’ for the 2011 All Africa Games Triathlon event in September this year. While Richard Murray won the elite event, team mate Chris Felgate finished seventh overall. The women’s field was won for the fifth time by South African BSG athlete Kate Roberts. Other remarkable performances from the BSG Elite team included Wian Sullwald winning won gold in the Junior Men category to become the African Junior Champion for 2011.