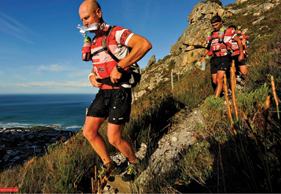 Outdoor events do not come more brutal or challenging than the recent Expedition Africa. Imagine a gruelling route through the Southern Cape mountains, with teams of four running, mountain biking, hiking, paddling and canyoning through the night. Made up of a mix of both male and female athletes, these adventure racing foursomes have to be totally self-sufficient and must navigate to checkpoints using topographical maps and compasses.

Sleep on Expedition Africa was reduced to a compulsory five-hour break midway during the race, as well as the occasional snatch of shuteye in a ditch along the road or huddled together in a dark pine forest. This is adventure racing, the so-called ‘Sport of the Gods’, and it is certainly not for the faint-hearted.

WINNING SPREE
The MERRELL Adventure Addicts definitely do not suffer from any heart condition, and up to now 2011 has been a massive year. Wins and podium places in events such as the Garden Route 300km MTB Challenge and a number of other events led to the GARMIN Wartrail, a three-day suffer-fest of extreme trail running, mountain biking and paddling in the remote northern part of the Eastern Cape. ‘The Addicts’ went ballistic along the course – 60km run, 130km bike and 60km paddle – to once more hold aloft some serious silverware.

However, the ultimate test of their ‘Merrell mettle’ was to be the brutal Expedition Africa, a true expedition-style, non-stop adventure race. This multi-disciplinary event combines the full gamut of adventure sports, and teams from all over South Africa (as well as a few international athletes) joined together on the start line in the village of Hermanus.

STARTING OFF
When the start gun went at dawn on the morning of 9 May, few racers better understood the pain and suffering that lay ahead. The MERRELL Adventure Addicts, however, never once showed any hesitation as they surged ahead with the 22 other teams to rise to the challenge. Awaiting them was a minimum of three days of racing along a 500km route crisscrossing the southern Cape mountains and the gorgeous Whale Coast.

“I knew this would be an extreme test of team dynamics, fitness and commitment, but our build-up had been superb,” said team captain Graham Bird. Tatum Prins, lone female ‘Addict’ and long-time stalwart, agreed that the team had never been hungrier for glory: “These are ‘my boys’, and God knows, I will go through hellfire with them.”

Before the end of Expedition Africa, the MERRELL Adventure Addicts figuratively did just this. They ran from Hermanus through the Fernkloof and Walker Bay Nature Reserves to Gansbaai (a quick mountain marathon), then got on their bikes for a 140km mountain bike crank to Bredasdorp. Thoroughly warmed up, they trekked through the night along the ridgeline of the Grootrivier ranges to Salmonsdam Nature Reserve.

SLEEP? WHAT’S THAT?
At the midway camp race rules forced the team to rest for five hours after going full tilt for more than 30 hours with less than 15 minutes sleep. By then, first position had been swapped a couple of times with Team Cyanosis, but MERRELL Adventure Addicts felt confident that they had broken the back of the race with a lead of just on one hour over their rivals.

The next bike leg took them into the night once again, this time finishing near Villiersdorp, where a technical canyoning (or kloofing) leg awaited them. With the help of head torches and maps they scrambled, crawled, jumped and abseiled their way along the rocky ravine to the top of Theewaterskloof Dam. Here two double kayaks awaited them, and they paddled onto the water in search of two checkpoints.

THE SWEET TASTE OF VICTORY
A final mountain biking leg saw them swooping through Bot River and to the Hamilton Russell vineyards beyond. They were on the home straight, but a final challenge awaited them along a short running orienteering course on this gorgeous wine estate. Then, after two-and-a-half days of racing, the sweet taste of triumph awaited the tired but elated MERRELL Adventure Addicts as they biked the last few kilometres to the finish in Hermanus. In the end, they finished three hours ahead of Cyanosis, and nearly five hours ahead of third placed Team Accelerate from the UK.

For more information on Team Merrell Adventure Addicts, their sponsors and upcoming races, check out their website at www.advaddicts.co.za