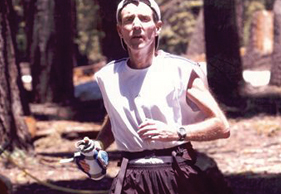 The last day that Scott Ludwig didn’t run was 29 November 1978. He was still studying English at the University of Florida at the time and he went to a conference in Atlanta with one of his professors. The professor had been urging him for a long time to start running and on the trip, on 30 November 1978, Scott finally agreed to join him for a run. He still remembers every detail about that first run and says his professor ran a one-mile loop six times. Scott ran every other loop with him until he had done 3 miles. “I was pretty proud of myself after that first run, and my professor kept me at it, eventually talking me into running a marathon in March of 1979. I was hooked and haven’t stopped since.”

Scott can’t remember when he realised he was on a streak, but about three years later he consciously made a decision to keep the streak alive. He was in Pennsylvania in January 1982 and it was 11:30 at night, but he had not been for a run yet. “I looked out of the window and it was snowing, and I thought I can’t go out in that, but I did anyway and ran three miles before midnight. Now it’s second nature and I haven’t really thought about ending it since then. About every six months or so I have a day where I don’t feel like I want to run, but then I go anyway and I always feel better once I’m out there. The next day I’m better again and want to get out there.”

33 YEARS AND COUNTING
This means that for the last 33 years Scott has been getting up at 3:30 every morning to go for a run. He has never had any injury or illness that was serious enough to keep him from running and has notched up a staggering 196,800km on about 150 pairs of running shoes. He wants to keep running until he has the longest streak in the USA and hopefully until he has run 200,000 miles (320,000km) and 200 marathons. This will probably be when he is in his late seventies.

So why does he do it? Ask Scott and you don’t really get a concrete answer; he just loves running and wants his name next to the longest streak. “As long as I don’t die and I’m not in a coma, I figure I can keep going,” he explains. The United States Running Streak Association’s official list of active streak runners in the country places Scott at number 35, with the runner in first place on a streak of 43 years. However, Scott says most other streak runners won’t do ultra-marathons and jeopardise their streak, they mostly stick to their one mile per day run and average a little less than 3,000km per year.

That is what makes Scott a little different. He has run 180 marathons and 50 ultras, and likes to do at least 5km per day. In recent years he has averaged approximately 6,400km per year but he says he is trying to cut back. “I peaked at 5,400 miles (8,640km) in 1998. Back then I ran some really good times in the ultras and over long distances, but once I turned 50 my body said I should cut back. Five years later my brain caught up with my body and now I’m trying to be sensible. This year I might not even reach 4,000 miles (6,400km), which is probably a good thing, but it’s hard to let go.”

CROSSING OVER TO THE DARKSIDE
As Scott’s love for running grew he looked for people to join him on some crazy running adventures, but he couldn’t find what he was looking for at his local running club. So he decided to start his own running club with long-time friend and running partner, Al Barker. In 2002 they established the Darkside Running Club with six members. “Most people think we are called the Darkside because we always run in the dark, and though this is true to some extent, it was actually because we wanted to do something a bit more adventurous than 10km runs and therefore ventured onto the Dark Side.”

Today they have grown to about 200 members and the club is unique in that you only have to pay a once-off fee of $35 for lifetime membership. This fee gives you access to approximately 200 runners from all over the USA, Canada and the UK who have done almost any race you can think of. “Between our members you will find someone who has experience in just about any race in the world, and what’s more, you will probably have a place to stay in a city where you’ve never been before. I find that runners universally are very open about offering their home to another runner, even if they don’t know them from Adam.” Also covered by this membership fee is the club’s quarterly newsletter and three free marathon entries (all in the USA).

Like most runners the sport has not only influenced Scott’s fitness and health, but also his life. It has influenced his choice of friends, given him the opportunity to travel, and even made him a writer. He’s written three books already and says he does most of his writing whilst running. The books are all about (you guessed it) running, and he writes his club’s quarterly newsletter, but Scott says there is one thing that stands out above all. “I’ve always thought runners are the best people in the world. It takes a special kind of discipline and dedication to run and it has made me disciplined in everything I do. That said, I think the biggest influence running has had on my life is that I don’t know what night time is anymore. Come 9:30pm my day is over, where most people get their second breath then. But I have the mornings when it’s quiet and you can think. I wouldn’t trade that for anything.”

A SPECIAL RACE
Scott travelled to South Africa this year with his friend and running partner Susan Lance to run the Comrades for the first time. They ran it together, finishing in 10:35 and enjoying every minute. Interviewed just before the race, they said they loved the atmosphere in Durban and felt like celebrities, but what amazed them most was the amount of people running an ultra-marathon. “In the USA, the ultra community is really small. You can run an ultra pretty much anywhere in the country and know almost everyone in the field – it’s like a little reunion every time. Here you have thousands of people running! I’ve heard running the Comrades is one of the greatest things in the world to do and a member of our club said it was the best thing he’s ever done. I don’t know what to expect in terms of crowd support or how bad the hills are, but I just want to finish and enjoy the sights and the experience,” said Scott.

So why do the Comrades now, after 33 years of running? Scott said he always knew about the Comrades and wanted to do it since forever, but he saved it for a special occasion: His 50th and most probably last ultra-marathon. “The Comrades may not be the longest or the hardest ultra in the world, but it has a reputation in the USA for being the most prestigious. I’ve done much harder races, like the Western States 100 miler and the Badwater Marathon, but this was the last thing on my bucket list. I wish I ran it in the late 90s when I was running really well and fast, because then I would have aimed for a seven or eight-hour finish, but I just want to finish it now. All the other goals, like reaching 200,000 miles and getting the longest streak will be nice, but the Comrades I had to do.”

After the race, Scott sent an e-mail from the USA where he simply said the race was tough, but amazing, he loved meeting Zola Pieterse at the expo, and the Castle Light tasted really good afterwards. Seems like most runners’ feelings towards Comrades are pretty much universal.

For more information on the Darkside Running Club, or if you want to join the club, visit their website at www.darksiderunningclub.com.

A streak of what?
According to the United States Running Streak Association, the official definition of a running streak is “to run at least one continuous mile within each calendar day under one’s own body power (without the utilisation of any type of health or mechanical aid other than prosthetic devices).” That might sound complicated, but it simply means you have to run at least one mile (1.6km) every day between midnight and midnight.

The top streak runner in the USA is Mark Covert, who has been running every day since 1968, ten years more than Scott, who is currently placed 35th on the list. Streaks are measured by days and not distance and the runners don’t get any special prizes or medals, only the accolade and satisfaction of saying they have one of the longest running streaks in the USA.