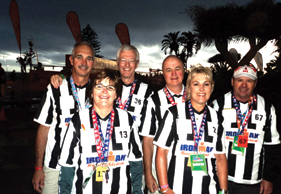 A Race Referee – or more correctly, a Technical Official – has quite a lot of power on race day. He or she has the ability to penalise you for any transgression, and in more extreme cases, even to disqualify you on the spot. And we all know that when this happens, your race day is pretty much done.

In some cases, athletes take out their frustration on race referees, but at the end of the day, we all realise that the basis of refereeing is safety and fair play – and not just among the front athletes, but all the way down the field. After all, everyone deserves the same playing field.

FOR THE LOVE OF SPORT
Race day is usually a long and gruelling day for most of us, but we often forget that it is just as long a day for race referees. They are up at the crack of dawn and sometimes leave long after we have had hot showers and a meal after a hard race. A post-race meeting or checking and signing off results sees many race referees get to bed long after midnight. And just as we sometimes race in rain, cold or blistering heat, they operate in the exact same conditions. There are many similarities between referees and athletes, but the most important is that both are doing what they love.

Two well-loved referees (and organisers of the popular annual Rhodes Trail Run), Darrell and Evie Raubenheimer, explain why they decided to become race referees. For Darrell it was purely because he wanted to give something back to the sport. “I remember when I was active as a runner, there were always folk out there time-keeping, refereeing and marshalling, sometimes in really lousy weather, just so that I could enjoy my run and do it safely. I’m sure I never thanked them enough. Now it’s my turn to be one of the mostly unseen ‘backroom’ folk at events.”

Evie started by first ‘just helping out’ at Ironman, before officially refereeing. She loves recognising athletes from previous races. “About a third of our Rhodes runners have done 70.3 or Ironman, so at bike check-in it’s a nice opportunity to see them, especially in warmer conditions.”

THROUGH UPS AND DOWNS
Just as athletes experience ups and downs during a race, so do race referees. One of the hardest parts of being a referee is dealing with unpredictable weather conditions. “If you’re an athlete competing in adverse weather,  be it a skin-burning scorcher, icy cold wind or rain, you get on with it, you live with it. Officials also have to grin and bear it! At 70.3 this year it poured. We were drenched after the race briefing on the Friday, got totally soaked at bike check-in on the Saturday, and drowned again on the cycle leg on the Sunday,” says Darrell.

But as bad as it sometimes gets, it can be just as good. “Generally, triathletes are really nice folk, so it’s always a pleasure being there for them. Also, there is a wonderful spirit amongst the PE refs and we make sure we have fun at events. It’s never boring, not by a long chalk,” both agree.

WHEN NERVES TAKE OVER
We all know no matter how well we are prepared for race day, sometimes nerves take over and we do funny things. And it’s usually race referees who get to giggle about it. “There are so many funny stories to tell, all of which are probably not that funny to the people they happened to. There is a humorous incident at almost every single event. We’ve had someone come to bike check-in at a 70.3 blissfully unaware he did not have a saddle,” chuckles Darrell.

Evie tells of a duathlete getting to the mount line coming out of transition one and realising he had one cycle shoe and one running shoe, another guy arriving for a triathlon and minutes before the start realising he had his daughter’s wetsuit, and another going down to the beach for the start of the swim with his cycle helmet on. “Watching some athletes at our development tri’s having a tea party in transition one, spending ages towelling themselves off, having a few relaxing drinks, taking it so slow while all around them it’s chaos, is fun to watch, and so different to someone like elite triathlete James Cunnama who is in and out of T1 in the same time it takes them to remove their swimming goggles,” says Evie.

PLAYING BY THE RULES
Elite professional athletes are usually a pleasure to ref as they know the rules for each event, but the biggest mistake most average athletes make is not attending race briefing, not listening properly and not checking their equipment before the event. That’s when things can go wrong and athletes get penalised, or even disqualified.

Both Darrell and Evie agree that athletes generally know when they are in the wrong. “There might be a few mutters and glum faces, but triathletes know that if they are carded by a ref, there’s a valid reason. Any flak comes from spectators. It’s pretty much the same as when I watch a rugby match. I can get a bit heated with the ref, but then he knows the latest rules; I certainly don’t. He’s got a spot-on view of what’s happened; I don’t have. He’s got experience to evaluate and interpret the rules instantly, which I certainly don’t have! All sports are like that – one has to accept that comments come from folk who don’t know or are maybe not impartial,” says Darrell.

GETTING INVOLVED
Triathlon South Africa run ITU referee courses in various centres – all you have to do is speak with anyone on the local provincial triathlon body and they will welcome you with open arms. If you are thinking of becoming a race referee, Evie and Darrell advise that you have to be the type of person who volunteers without expecting much thanks. And a good sense of humour and not taking things personally will definitely help.

THE RHODES EXPERIENCE
Besides being race referees at various triathlons, Evie and Darrell have also been involved with the well-known 52km Rhodes Trail run (Border province, July) since its early days. Darrell ran the second one in 1990, and the next year Evie started helping at the finish. Evie’s involvement grew and since 1998 she has been race director. The race is special for many reasons, including Evie knowing each and every runner by name. Most come to Rhodes for the snow and the incredible winter wonderland route, but it’s also the small things that count: All runners are treated the same, there are no cash prizes or lucky draws, all get a complimentary glass of sherry as they wait in the registration queue, and of course, there are always the war stories to take home.