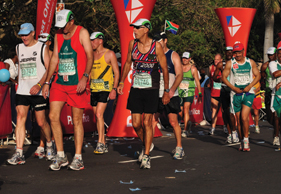 When Jannie Van Deventer wakes up every single morning, there is one thing he has to do: Run! It is in his blood, and one of his greatest passions in life. This is a man who has crossed the finish line of Comrades a remarkable 30 times. On top of that, he has completed numerous (former) Leppan Ironman races, duathlons, triathlons, often winning many of these in his age category.

As an ex-rugby player, he only started running in his late 30s after he saw a group of sweaty guys finishing their run at the local gym. Before long he was hooked on running and finished his first marathon in a remarkable time of 3:09. He kept on running and soon found himself running the one Comrades after the other. He received his green number (10 Comrades) from the legendary Wally Hayward, who also awarded him his double green number for 20 Comrades. And when Jannie crossed the Comrades finish line for the 30th time, it was Bruce Fordyce who awarded him his triple green number.

SOME MUCH-NEEDED INSPIRATION
You won’t find many runners who are as passionate about Comrades as Jannie, who despite this passion, doesn’t even know where most of his medals are! For him the Comrades Marathon is so much more than just race day, and he advises runners to remember all the sights and the smells on the day, but to not forget to enjoy the whole experience.

“Comrades is about the build-up, the months and weeks of training, socialising with mates, walking around at the expo, and then eventually waking up on the morning of your big day. When you close that door behind you to walk or drive to the start, your fear starts, because there is no race such as Comrades anywhere in the world! It is tough and it is gruelling.”

THINGS TO REMEMBER
• There is no such atmosphere as at the start of the Comrades Marathon. Expect to feel emotional.
• Make peace with the fact that you have no idea what is going to happen to you on the day. You might have trained for a silver medal, but you might end up finishing in 11 hours!
• Know that there will be some very tough Comrades Marathons, and others that you experience as “slightly easier,” but there is NO such thing as an easy Comrades.
• Comrades is not your friend! Never ever lose respect for this race.
• If you are a novice, never predict your finishing time. Rather just go back home with the medal around your neck as proof.
• There will be some very dark moments on race day, but remember to have fun and enjoy the day!
• Start slowly.
• Remember, when you cross that finish line you are part of an elite group of runners who have conquered the Ultimate Human Race.

LONGEVITY
For Jannie, longevity lies in the fact that no one should ever stop exercising. Yes, over time you do slow down, but one should never ever become a couch potato. “So many people stop training and it is only after their first heart attack that they return to sport.”

Jannie, who recently emigrated to America to be closer to his children, takes pride in the fact that at the age of 67 he can still run marathons and half marathons with his children and grandchildren. In fact, he plans to return to South Africa in three years, when he is 70 years old, to tackle his 31st Comrades with his son! And who knows, says Jannie, he might just take on the mighty Big C when he is 80 years old…