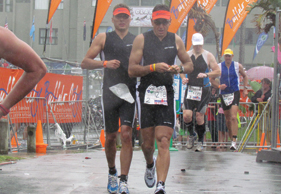 Hein was born blind, but it was only at the age of six months that his parents realised that their son did not focus on anything they held before his eyes. Since the age of five, he attended the Worcester School For The Blind, an environment he loved as he grew older, especially as he got to mingle with people who faced the same challenges as himself. “There are some amazing teachers at that school. I will always remember one teacher who everyone initially thought was crazy because he took a bunch of blind kids on hikes in the mountains! Only later did everyone realise it was his way of teaching us blind kids that in life we are going to face some great challenges and that we are capable of overcoming them.”

DEFINING MOMENT
After school Hein started working as a switchboard operator at Absa. It was at the age of 21 that he reached a defining moment in his life. “We were two blind guys and a deaf guy who decided to take on the Cape to Rio Yacht Race. I always joke and say it is only a deaf guy who could have been persuaded by two blind guys to tackle an event such as that,” chuckles Hein.

On a more serious note he admits that 14 days on a yacht at sea made him realise how small he is in such a magnificent world. “One day I sat on the yacht and thought if I could do this, there was still so much more out there that I could achieve. I fought for so long against my blindness and I could not understand why it had to happen to me. I was a miserable person and I had to get through that.”

ADVENTURE FILLED LIFE
Hein slowly started getting involved in more and more sporting events and adventures. One of the first sport events he participated in was being a player in the South African blind cricket team that won the World Cup in India during the inaugural Blind Cricket World Cup in 1998. “As I walked off the cricket field, I wondered whether I would have had the chance to represent my country on the highest level if I could see?”

Hein realised that the minute he stopped feeling miserable and sorry for himself, his whole life changed His career also took a different direction as he became involved in selling computers, while more people started asking him to present motivational talks on his life and growing adventures as a blind person. Meanwhile, his passion for adventure grew and in 2005 he broke the World Blind Land Speed record by setting 269km/h. He admits it was a bit tricky finding anyone brave enough to get into a car with him! When a Belgian blind driver broke his record some time later, Hein was determined to outdo him. He phoned the late Lolly Jackson and set a new record of 322.5km/h in the controversial strip club owner’s R4.5 million Mercedes SL65 AMG Black Series.

“Initially, I tackled these challenges to obtain a feeling of self-worth, but today my driving force is so different. My passion is born out of the fact that for more than 25 years I fought against being blind. I wasted energy on something that I could not change. It influenced me and the people around me negatively. I never want to go back to that frame of mind. I want to show people that if a blind guy can finish something such as the Epic, what is their excuse not to tackle some of life’s challenges?”

AN EPIC EXPERIENCE
One of Hein’s greatest and most emotional adventures yet is finishing the recent Absa Cape Epic mountain bike event with his loyal team mate and close friend Gerrie Olivier. It was the first time ever that a blind person completed this gruelling race, which covered 707km over eight days, with more than 15 000m of climbing.

“Gerrie and I participated on a tandem and I now know that if our friendship could survive the Epic, we are set to be friends for life! There were so many tough days. At the finish I was so emotional and hardly had words to express what I felt. It was all too much. It was the most physical and mental challenge I have ever tackled. I knew it was going to be hard, but I never realised on how many different levels. Sitting at the back of a tandem can be frightening and you have to have 100% faith in your partner. Not only do you have to move in the same way he does, the two of us had to constantly communicate, especially on the dangerous downhills.”

WITH A LITTLE HELP FROM MY FRIENDS
Hein’s sporting talents are definitely not confined to one sporting discipline: In January, he and Gerrie tackled Ironman 70.3 in East London. “When I said to Gerrie, let’s try and do 70.3, he said he can’t swim! Well, then I mentioned to him that I can’t see, and that he should not make his problems mine,” chuckles Hein.

Hein was able to train for the swimming leg by himself as he used a line touching his body as guidance in the water, but it was a whole different story swimming 1.9km in the sea in East London with a partner. “Race day was the first time ever we swam together in the sea beyond the breakers,” says Hein. The two friends used a band connecting their hips, but it was not much of a success as fellow swimmers swam in between them. They have now decided to use a different harness when doing future triathlons, of which Hein plans to still do many.

He will be participating in all the BSG Energade sprint triathlons coming up soon, and then he plans to take on a couple of international triathlons, all in preparation for one of his ultimate dreams: participating in the world-famous Ironman in Kona, Hawaii next year. Other future adventures include paddling around Robben Island on a surfski.

CHOICES
If he had the choice to see, would he? “There are certain things that I would love to see, but it has taken me 38 years to get where I am today. I am happy where I am and for who I am. I am grateful for so many opportunities and I don’t want to risk or change the happy rhythm of my life for anything. Being able to see is probably not destined for me,” says Hein, who lives just outside Stellenbosch with his wife Melindi.

Hein would love to run the Comrades Marathon, but first wants to tackle the Two Oceans Marathon next year before taking on the mighty big C in 2013. “I have great respect for anyone who runs the Comrades Marathon. If I can give advice to anyone running Comrades, I would say: ‘If you are at the end of your rope, tie a knot and hang on!”

THE VISIONTRUST
All the adventures Hein tackles are in aid of TheVisionTrust, an organisation he founded in 2008. Its main aim is to make the world as we know it a more accessible place for persons living with disabilities. The project assists disabled people to have access to workplace tools and facilities, thereby helping them to create their own future. Anyone who would like to contribute to TheVisionTrust can do so at: Absa Bank,
Account name: The Vision Trust, Account number: 4069423823, Branch code: 632005.

HEIN’S RECIPE FOR ACHIEVING EXTRAORDINARY RESULTS IN LIFE
• I refuse to get up in the morning if I can’t start the day with a smile. Trust me, it has happened that I have stayed in bed for a day or two!
• Everyday I thank God that I can live my dreams, love life and have gratitude, something all of us have too little of.
• I believe in keeping physical fit and knowing one can reach your goals.
• If I have a dream or a goal, I remind myself of that at least five to 10 times a day, because then it becomes a reality.
• I try to commit an act of random kindness to another person at least once a day.

HEIN’S REMARKABLE ACHIEVEMENTS
• April 2011: Becomes the first blind person to complete the 2011 ABSA Cape Epic.
• January 2011: Ironman 70.3 in East London.
• February 2010: Lap record around the East London Grand Prix circuit.
• October 2009: Broke the World Blind Land Speed record becoming the fastest blind driver in the world by averaging a speed of 322.5km/hr in a Mercedes SL65 AMG Black Series.
• March 2007: Completed the Hong Kong Marathon
• November 2006: Completed the New York City Marathon.
• August 2006: Took part in the Standard Chartered Bank Ironman event in Korea.
• February 2006: Becomes the first blind person in the world to cycle solo over a distance of 39km.
• Skydived from a height of 10 000 feet and bungee jumped from one of the highest bridges in the world.
• Tackled the white waters of the Zambezi River in a rubber raft.
• Completed the Cape to Rio Yacht Race at the age of 22.
• Played in the South African team that won the inaugural Blind Cricket World Cup in India in 1998.