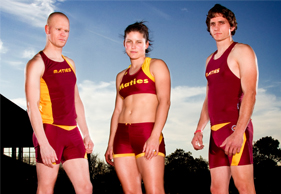 Being one of the oldest tertiary education institutions in the country, the University of Stellenbosch, or Maties as most of us know their students, has come a long way since their first organised athletics meeting on 21 March 1885. At this meeting, events such as place kicking, drop kicking and cricket ball throwing were common place with a few more traditional events like long jump also thrown into the mix. With a history as long and varied as this, it goes without saying that Maties has had some noteworthy athletic achievements at its well-known Coetzenburg Stadium.

In the early days, the university’s athletics meetings took place in ‘Die Laan’ until the official pavilion was opened in 1898. In 1932 the famous Coetzenburg Stadium was inaugurated with the hosting of the Dalrymple competition. Facilities kept on improving and by 1941 it was already reported that Stellenbosch had one of the best athletics fields in the country, something that is still true to this day. The main pavilion was upgraded in 1958, and in 1974 the track was upgraded to a synthetic surface. Since then this great stadium has played host to many a great athlete.

WELL KNOWN MATIES
Mario Smit, head track and field coach, says it is extremely difficult to pinpoint only a few achievements that stand out in the club’s history, for the simply reason that there have been so many over the years! “Coetzenburg and Maties are synonymous with athletics. The first dream mile in the country, several national records and various world champions have been the results of our committed partnership with athletics.”

Some of the great names to hail from Stellenbosch go back as far as the 1920’s with Attie van Heerden who competed in the 400m hurdles semi-finals at the 1920 Olympic Games in Antwerp. Johann Luckhoff claimed a silver and bronze medal during the 1934 British Empire Games and in 1935 Johan Schoeman ran a time of 9.8sec in the 100-yard and 22.1sec in the 220-yard events. Other Maties who represented South Africa abroad include Louis van Biljon at the 1952 Olympics in Helsinki, while John van Reenen, Danie Krogman, Clive Dale, Dicky Broberg, Danie Goosen and Willie Loots travelled in secret during the isolation years with manager Jannie Momberg and coach Wium Mostert to beat several international athletes. Special mention should also be made of Div Lamprecht, who was the first South African to ever run a dream mile.

In the 1970’s Maties athletics continued to flourish, with three of the seven South African athletes that featured in the top 12 in the world at that time having roots in Stellenbosch: Danie Malan (1st in the 1500m and 3rd in the 800m), John van Reenen (9th in the discus) and Ferdie le Grange (10th in the marathon). John set a world record in discus in 1975 at Coetzenburg with a throw of 68.48m.

PROSPEROUS TIMES
At the moment, Matie athletics is once again experiencing a successful period, with athletes like Janet Wienand (heptathlon), Cornel Fredericks (400m hurdles), Sibusisu Sishi and Shaun de Jager (400m), Peter Koopman (road running), Jacques Pretorius (1mile and 1600m) and Janice Josephs, Maryke Brits and Luvo Manyonga (long jump) delivering sterling performances. Luvo is not only the junior world champion in the long jump, but also holds the African and South African junior records in the event with a distance of 8.19m. Certainly a name to look out for in the future.

The road running section of the club has also been showing exciting and consistent growth, and Mario says they regularly have athletes that take part in the Two Oceans and Comrades Marathons in Maties’ colours, something that doesn’t happen regularly at most university athletics clubs. Therefore, road running is one of the club’s priorities and they want to continue developing this section of the club to improve performances and also become a force to be reckoned with on the South African road running scene.

TOP DOGS
A common sight at Coetzenburg is large numbers of top international athletes training there, and not only because of the quality of the facilities, says Mario. “They also think it is one of the most beautiful tracks in the world and just love training here! When international athletes feel this way about our facilities, it should be the aim of any South African athlete to also train on one of the best-known tracks in the country.”

The club offers competitive bursaries to prospective students and Mario says they are especially proud that their athletes not only perform on the track, but also in the lecture halls, with some good academic performances. Combine this with the quality of coaches like Wium Mostert, Johan Landsman, Joep Loots, Cyril Lawless, Chris Davids, Johan Fourie and Bennie Schlechter, and it is understandable why Maties keep achieving great results to build on the club’s rich history.