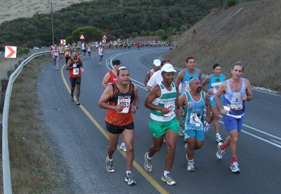 When a race features a monster 2.4km climb starting around the 13km mark called Big Mama, which is followed later by her three ugly step-sisters called Oops, Ouch and Eeeiina, you know this is going to be a good hill training run! Well, just over 1200 runners took on Big Mama and her family this year, in slightly breezy but still decent running conditions, but what most of the field didn’t know was that the race was almost called off at the last minute – for the second year running.

Head organiser from the Tygerberg NLC club, Leon Thelander, explains that his committee once again ran into problems with City of Cape Town officialdom. “The Event Office demanded new venue safety and medical plans, and the Disaster Management and Traffic Departments also gave us a lot of resistance. The problem is that most race organisers are just volunteers, so we don’t know the complicated systems and templates, which seem to change each year anyway, and then the race permit only gets issued at the last minute. I’ve heard the same story from quite a few other clubs and organisers – it is getting incredibly hard to put races on.”

Thankfully, Leon and co. got past the red tape to put on a most successful 29th running of the race, and Modern Athlete was at the finish to get a few post-race comments.

Leo Rust, acsis VOB, 2:06:00
“I had a great run today. I ran with a couple of friends at four minutes a kay to the big hill, then worked up all the hills, and even managed a few faster kays towards the end. I’ve done this race two or three times before, so I find it does actually get easier each time, mainly because I know what to expect, and know that it doesn’t end after Big Mama at 15km. I know there are still a few nasty bumps to come!”

Brian Super, Edgemead Road Runners, 3:08:40
“I took it very easy today, so it was a lekker slow run on a great route, in great running conditions. Only thing I missed is the signboards they had last year for the three infamous hills, Oops, Ouch and Einnnna! Luckily they didn’t turn out to be as bad as I thought they would be this year. I actually stopped often along the way to take pics. I’m the club paparazzi, and I send my pics to club members and to our website. When I don’t send them soon enough after a race, I get rude messages like ‘Where’s our weekly fix?’ from clubmates.”

Shuraine Abrahams & Hester Kotze, Brackenfell AC, 2:41:58 & 3:01:23
Shuraine: “I thoroughly enjoyed my run today, because I ran my eighth PB in my last 10 races. I think the training is really paying off, because this is the first year I am doing proper road training. Last year I was still doing just about no road training, just aerobics. It was Hester that got me into running when she challenged me to try running, because she said if I can manage two to three hours of aerobics, I should be able to do a 10km. I didn’t really want to run anything longer, but next thing I knew I was running half marathons, then marathons and then even Two Oceans, despite my longest training run before Oceans being a 10km!”

Petrus Campher, Top Form AC, 3:20:17
I can’t remember how many times I’ve done this race before – probably eight or nine times – but I know I went up Big Mama four times today. Not the whole thing, but still, from the bend to the top, then back down to the bend again, four times. These days I run most races to help others, especially on the big hills, so I look for people who are taking strain or are injured, and I run with them. Big Mama comes between 12 and 15km, and if you’re training for Two Oceans, that’s nothing, really, so I don’t mind a bit of extra hill training to help others.