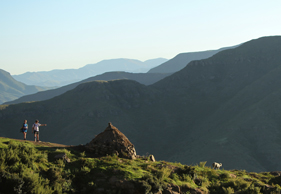 “The horribly under-trained one.” This is what I was known as at the Lesotho Wildrun. You see, when adidas invited Modern Athlete to take part in the Lesotho Wildrun, I was the only journalist on the team who was not tapering for Ironman or struggling with an injury, which meant the big dial fell on me, despite being a beginner training for my first half marathon!

I was assured that “It’s not that bad” by my editor, Michelle Pieters. She completed the Wildcoast Wildrun (112km over three days) last year and I figured hers was an informed opinion. I was told that I can take it easy, walk the uphills, run the flats and the downhills at an easy pace and finish the 40-odd kilometres in about seven hours. So I added a couple of hours and said to myself: “Myself, you can do this. 40km in 8 or 9 hours on day one and three, with a short 28km thrown in there on day two. Sure, it’s going to be hard, but it’s possible.” The deal was done. I was going to Lesotho.

Note to self: Never, ever believe your editor!

THE REALITY
Flying into Maseru the butterflies in my stomach went into a frenzy as I stared in disbelief at the landscape below me. All I could see was mountain upon mountain with the only thing separating them being deep crevasses. “Surely, I won’t have to run over those?” I thought as I swallowed hard on the lump in my throat.

Alas, later that night, at the first day’s briefing, the reality set in that we were indeed planning to basically cross the Maluti Mountains. Unlike my ancestors, I wasn’t going to be barefoot and following an ox wagon, but the next three days was as close as I’ll ever come to being a ‘Voortrekker tannie’. During the briefing, race director Owen Middleton tried to calm our nerves by telling us that the 1 879m ascent on the first day was not as bad as it sounds, that we would only venture into what is termed as ‘high altitude’ for a short part of the route, and that the first 23km was the worst, then basically all downhill from there! We received an essential lesson on how to use our GPS and retired to bed. There was no turning back now.

DAY 1: RAMABANTA TO SEMONKONG, 43.5KM
It took me about half an hour to realise I needn’t bother putting away my GPS – I was going to hold it in my hand permanently for the next three days! As the frontrunners pulled away, I took it easy at the back with the tough old ducks: Evette Webster and Roland van der Merwe. A few minutes later Dominic Cullinan appeared from behind a hill, looking for the right path after getting lost within the first hour. It didn’t take long for everyone to realise that you need to stick together because odds are you’re going to lose the path rapidly if you try to do it on your own.

After about three hours we had travelled about 13km, but according to the GPS we were only approximately 10km into the route. Somewhere we had gone horribly wrong, and just like that we added another hour to our time on the trails. It was at this exact moment that I felt that sinking feeling start setting in… It was going to be a long, long day.

The trails we were looking for but couldn’t always find, consisted of a combination of cattle tracks, summer grazing camps and the locals’ footpaths. Going into the mountains on foot gave us the opportunity to get to places where few tourists had been before. We saw mountain villages where the locals live off the land and have hardly any contact with what we would call the civilised world. However, the Basotho people are most definitely a civilised people. They live a peaceful life, with livestock forming the centre of their existence. Their donkeys serve as 4x4s and their horses as BMW’s. They know their surroundings like the back of their hand and countless times a few little tykes or elders showed us the right way as we, once again, couldn’t find the route, often running or walking with us for half an hour until they were sure we knew where we were going. Not that we were so sure! The first question they asked us was always: “Where are you going?” When we answered they either gasped or just shook their heads in disbelief. Though always friendly and helpful, I think they were perplexed as to why we were there.

Miraculously, we managed to keep any further detours to a minimum, though I’m convinced we didn’t take the most efficient route, instead bashing our way through dense shrub and going up and down every hill we could find. After 12-and-a-half hours of bundu-bashing, we reached the end of day one, exhausted, dirty and sore, but satisfied and thankful that we had survived the ordeal. Thankfully, we found out that no-one could really piece any significant stretch of running together and everyone’s times reflected that, with the winners coming in just under seven hours. I was broken, though, and was wondering how I was going to get through another two days of this!

DAY 2: SEMONKONG TO SEMONKONG, 28KM
It’s amazing what a shower and a good night’s rest can do and I lined up at the start of day two with sore knees but a revived spirit. Owen had promised the second day would be better than the first, with more opportunity for running, less climbs and descents, easier navigation and spectacular views. He wasn’t lying.

It was a majestic day. As we made our way around the Maletsunyane Gorge, we had an unobstructed view of the river meandering its way through the gorge with beautiful waterfalls tumbling down the walls. Hopes of improving the previous day’s pace were short-lived as the fatigue of more than 12 hours on the trails set into my legs, and the need to admire the views forced us to a stop every now and again. We were in no hurry, though and made our merry way at a leisurely pace, truly enjoying every minute and trying to make as much as possible of our time in Lesotho.

The hardest part of the day was getting from one side of the gorge to the other. Going down the one side proved to be a painful experience, with my knees complaining all the way to the bottom. Heading uphill on the other side of the river may have had us panting, but it was a lot easier on the knees! The real highlight of the entire visit was the view of the mighty Maletsunyane Falls, a single, spectacular drop of 192m. Seeing these falls made every step and every blister worth every bit of suffering!

We completed day two in a much better mood than day one, but that was unfortunately the end of my race, as myself and Evette soon realised we had taken a sip of water somewhere along the way that was not meant for human consumption. Nausea, stomach cramps, a fever and a few other symptoms I’d rather not mention meant we couldn’t replenish our energy stores. Neither one of us was about to take on another 40km without the ability to eat or drink, and we had to withdraw from the final day.

DAY 3: SEMONKONG TO RAMABANTA, 42KM
It took us two hours to drive back to Ramabanta, so I wondered how long it would take the runners to make the trek. After the difficulty of day one took everybody, including the organisers, by surprise, they tweaked the last day’s route to shorten it by about an hour. The rest of the runners came down to Ramabanta on Baboon’s Pass, the same pass that is used by motorcyclists during the Roof of Africa event. Once again, they were treated to spectacular scenery and extremely technical terrain, but despite the fear of twisted and broken ankles, everyone managed to improve their times and all the Wildrunners were accounted for before the 12-hour mark.

The difference between the winners and the last runners home was almost seven hours, but every last runner received a hero’s welcome. In fact, the last group home was at the receiving end of a standing ovation and a cold beer, making me wonder where I’d rather end, at the front of the field or the back?

WHY RUN?
While comparing war wounds, there was quite some debate as to why we do this to ourselves. Is it because we like the challenge? Is it for the scenery? Is it to see if we can? With hindsight I can think of a few reasons.

There is no faster way to build a friendly relationship than by doing something like this. In three short days, those who ran together got to know their running partners a whole lot better than most lifelong friends know each other. When people are reduced to almost primal beings with only one goal in front of them, they support and carry each other through tough times to reach that finish line together. It makes you appreciate the simple things in life again. It makes you realise the beauty of what is around you, and it makes you appreciate each other.

When looking at each and every finisher’s face as they crossed the finish line on the final day, you could see that for a fleeting moment they felt invincible as they thought: “If 120km through the Maluti Mountains doesn’t kill me, nothing will!” Blisters disappear, inflammation subsides and sunburn heals, but that feeling of immortality will remain with every finisher of the Lesotho Wildrun forever, and they will know that they overcame the odds and are capable of so much more than they thought they were before embarking on this journey.

This is why the Wildrun is such an unbelievably, rewarding experience. We can only hope that the Wildrunner team will keep up the hard work and keep enabling us, mere mortals, to experience that feeling of immortality, even if just for a fleeting moment.

A big thank you to the Wildrunner team for organising a wonderful event, and to adidas for enabling me to take part in an unforgettable journey.

What you have to know when you enter the next Lesotho Wildrun:
DO know how to use a GPS.
DO know how to read a map.
DO cross-reference the two when you’re running.
DO listen to the locals’ directions.
DO make friends with the medics – you’re going to need them.
DON’T enter if you’re a beginner runner.
DO pack lunch in your running bag.