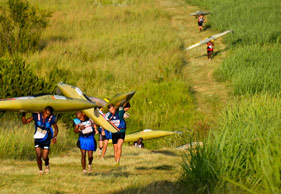 The Unlimited Dusi Canoe Marathon is a gruelling but awesome event held annually over three days in the Dusi Valley between Pietermaritzburg and Durban. The first day is 45km long, including roughly 15km of portaging with the canoe. Day two is also 45km, while day three is 35km, with shorter portaging sections on the last two days. Competitors have a choice to either compete in a single-seat K1 or two-seat K2 canoe.

KING OF THE DUSI
Mention the Dusi and the name Martin Dreyer springs to mind. He has won seven K2 Dusi titles and seven Non-Stop Dusi titles, as well as posted wins in the Vaal Canoe Marathon. And don’t think paddling is where his talents end: he also won the Land Rover G4 Challenge final in 2006 and other events such as the Bull of Africa and the Cape Point Challenge, and even ran the Old Mutual Two Oceans Half Marathon with his canoe on his shoulder!

Today, Martin lives just outside Pietermaritzburg in KwaZulu-Natal, where he owns and runs the Change a Life (CAL) Academy, which he started in 2009. The academy not only aims to train talented paddlers, but also to provide them with invaluable entrepreneurial and life skills. The athletes are provided with everything they need to become the best.

PADDLING FITNESS
There is probably no one that knows more about paddling and the fitness it requires than Martin. “Competitive paddlers need to train at least three hours a day, which includes paddling and running,” says Martin. Specific paddling training can involve nine sessions a week and varies from long endurance paddling sessions and interval speed work to so-called ‘boat gym’ sessions, where a cord is tied around the boat to create resistance. This helps to keep the boat from gliding and slows down every stroke, making the paddler work much harder.

The many portaging sections in the Dusi require specific running training, says Martin. We all know that running in itself is hard work, but running with a canoe on your shoulder is ten times harder! Therefore paddlers need to specifically prepare for this. “You have to condition your body to carry the extra weight on your shoulders. Also, while running with the boat, your head is tilted to the one side. Therefore, running with a boat is very conducive to injuries, because of the uncomfortable body positioning. Over three days of the Dusi, one paddles about 80km and runs about 25km. The Non-Stop Dusi is even harder, because the distance gets covered in only one day.”

Martin, who is as experienced a runner as a paddler, says that running has improved his paddling fitness tremendously. “Running is the core of fitness. It is one of the hardest sports; with cycling you can freewheel at some stage, with paddling you can drift and move forward with momentum, but with running the only time you get a break is when you stop! And then you are not moving forward. Nothing can develop your fitness as efficiently as running.”

CHANGE A LIFE
In 2008 Martin won his seventh Dusi K2 title with KZN local Michael Mbanjwa. “His friends all trained with us and ran barefoot. I realised they can be excellent athletes but don’t have any support structures.” That’s when Martin started the academy. “I trained with a big group for a month and at the end chose the 10 best candidates and developed them further. In 2009, seven of them finished in the top 20 and this year nine finished in the top 24! Eric Zondi finished in an excellent fourth position.”

The success of the academy was further evident when Michael Mbanjwa and Eric Zondi came out front to win the 15th edition of The Unlimited Non-stop Dusi Canoe Race, a 120 kilometre one-day event through the Dusi Valley in KwaZulu-Natal. Mbanjwa and Zondi were in good company on the podium, accompanied by another two pairs from Martin the CAL academy to make it a triumphant one-two-three for the academy.

Martin’s title sponsors are Computershare, Hi-Tec and USN, and he believes in supplying his athletes with the same products. “I have aligned myself with these sponsors and believe in the products.”

The academy provides the athletes with so much more than just paddling skills, however. In winter they also mountain bike and run, and compete in many multisport events. From participating in so many different events, doors have opened for some of the athletes: some have received bursaries to study further, and others have found full-time jobs.

BRIGHT FUTURE
Martin is currently enjoying a break from competition and focussing all his energy on his academy. “It is rewarding seeing the guys achieve. Without sponsorship this would not have been possible.”

His advice to anyone thinking of starting to paddle is to remember that what you put in is what you get out. “Set a goal for yourself, but make sure it is realistic. Ultimately, you must do it because you want to have fun.”