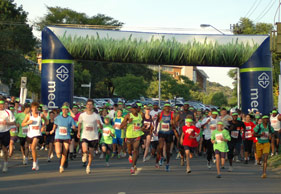 With the starter’s gun fired precisely at sunrise (06h03), the race started in clear and cool conditions from the Harlequin Club in Groenkloof, Pretoria. True to form, it was soon taking in a good few hills in the neighbourhood’s undulating suburbs. A total of over 5 000 participants, including numerous celebrities, competed in the three events, which had staggered race start times to overcome any early morning runner congestion.

This was the fourth consecutive year that Medihelp Medical Scheme has sponsored the event, and with this support the race has gone from strength to strength, with an annual increase in the number of participants over this period.

RECORD TIMES
The runners in the flagship 32km race started at a brisk pace and it was not long before the eventual winner, Shadrack Hoff of Toyota Running Club, broke away in the off-road section in the Groenkloof Nature Reserve. He built up a sizable lead in front of the bemused zebra and deer in the park to eventually break the tape in a course record time of 1:50:02. The women’s race was won by Irvette van Blerk of Nedbank Running Club, who showed the rest of the ladies the way over the hilly route before finishing in a record time of 2:12:28, some two minutes quicker than the previous best.

The men’s and women’s winners in the 10km Mini Monster were Transnet’s Benedict Moeng in a record 32:32, and Muchanetha Gwata of Mr Price in 39:45.

Unfortunately the cool weather conditions did not prevail throughout the morning, and the backmarkers had to deal with warmer conditions towards the end of the race. However, their thirst was quenched with an adequate supply of ice cold fluids along the route and at the finish at Harlequins. All finishers, including the 5km fun-runners, received commemorative medals for their respective events, as well as a quality goody-bag with the compliments of the sponsor, Medihelp.