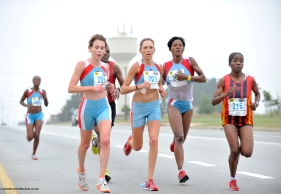 Cool, cloudy and wind-still conditions paired with a flat course (3 laps of 14km) brought with it expectations of fast times, but it was not to be. In the men’s race, things were pretty much even as the front group clocked the first lap in a time of 45:42, a fairly pedestrian 2:17 pace. However Lusapho April and Coolboy Ngamole pulled away from the group in the second lap, clocking 43:21. Starting the third and final lap Lusapho was only four seconds ahead of Coolboy, but he soon increased the gap to more than a minute and finished his race without too much pressure from Coolboy, although slowing a bit to clock a last lap of 44:18.

Though it is heartening that Lusapho’s time of 2:13:21 was three minutes faster than Coolboy’s winning time at last year’s championships, he was still unable to break through the 2:12 barrier, most likely as he did not have strong competition in the last lap. Coolboy’s time of 2:14:29 is a personal best and hopefully he will be able to carry on with the steady progress he has shown since last year.

After winning the 2010 SA Marathion Champs race in Durban, Coolboy once again did not receive a championship medal, because he was competing as an individual and not representing a province. The silver and bronze medals respectively went to 2010 SA Champion Benedict Moeng (AGN) with his time of 2:16:10 and Othanial Phalane (AGN) in 2:17:29.

TOP WOMEN ABSENT
In the women’s race Charn? Bosman (AGN) was crowned as champion though her time was a disappointing 2:44:44 – although it was still faster than last year’s winning time in Durban, the 2:48:56 posted by Zimbabwean Samukeliso Moyo, and considerably faster than the 3:00:30 that gave last year’s second-placed finisher, Lindsay van Aswegen, the national title. In George, Tshifhiwa Mundalamo finished second in a time of 2:47:44, but also did not receive a medal because she was running as an individual entry. Catherine Skosana (AGN) therefore received the silver medal for her time of 2:48:06, while Mpho Mabuza (CGA) claimed the bronze in 2:48:09.

It is unfortunate that the top women did not run, because they would have probably been able to run a sub-2:30 on the route and in the perfect weather conditions, says Nick Bester, National Manager of the Nedbank Running Club. He cited a misunderstanding between the provinces and the participants as the reason for their absence. “Women’s running in South Africa is experiencing a massive revival and for the first time in years we have four women capable of running under 2:35. Unfortunately we do not have enough depth in our male runners and that’s why the winning time was not very good,” says Nick.

We Want More
Donald Mathipa (CGA) competed at the event and finished in 2:24:27. This is his take on the event.

“I believe the SA Championships should receive priority on our athletics calendar and be given the same publicity as the Comrades and Two Oceans Marathons. Also, it is unfortunate that when enquiring about the event you end up being sent from pillar to post and given wrong information. How can we be compared to the power houses of distance running such as Kenya and Ethiopia?” says Donald.

“The lack of publicity is one of the main reasons why athletes who emerge victorious from these events remain without sponsors. The event should be publicised at least six weeks beforehand with at least the basic information such as the venue, prize money, registration fees and contact details for the organisers. Not only will this help ASA to get sponsors for the event, it will also help athletes who perform well at this event to find sponsors.”