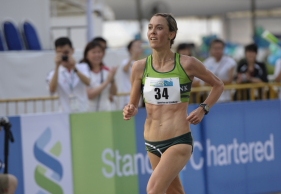 Most elite athletes live and breathe running, which usually leads to great success, but in some cases inevitably it can also lead to over-racing, injury and burn-out. One athlete who has managed to avoid these pitfalls is Annerien van Schalkwyk, elite athlete from the Nedbank Running Club. Her success over the last couple of years probably lies in the healthy balance she has created between her sporting, work and personal life. When chatting to Annerien, one quickly realises she is probably one of the most down to earth and humble elite athletes you will ever meet. She is dedicated and passionate, but at the same time does not take sport too seriously.

“It is sometimes difficult to work full-time and train as an elite athlete, but you can only train so many times a day! I need something else besides just running. I also think if you only focus on running, the pressure on you becomes immense,” says Annerien.

It is clear that this attitude has worked for her. Not only did she finish third in a time of 2:35 in her marathoning debut at the Standard Chartered Singapore Marathon late last year, she also became the sixth-fastest South African woman ever over this distance. On top of that, she has a 10km PB of 32:48 and a 21.1km PB of 71:26, which she ran at the 2009 World Half Marathon Champs in Birmingham. She also placed fourth at the Two Oceans Half Marathon in 2009. Annerien was recently selected to represent South Africa at the African Cross-Country Championships from 5 to 6 March in Cape Town, as well as the IAAF World Cross-Country Championships in Spain on 20 March.

HOW IT ALL STARTED
Annerien grew up in Kroonstad, where she played netball at school. As a student nurse at the University of Potchefstroom she did not have time for team sport and so took to the gym, where she had a specific routine, a 40-minute treadmill run every day followed by some light gym work. When she started working as a nurse at the Unitas Hospital in Centurion, she continued her gym routine and never once thought of road running.

In 2003, an experienced member of Irene Road Running Club saw Annerien running on the treadmill and immediately recognised talent! He persuaded her to join him on a training run, as he lived quite close to her. “That was my very first road run. I am an introvert and was quite shy, so I was hesitant when he suggested I join his club’s time trial. I decided to give it a go. He asked his friend to pick me up and take me to the time trial. And that is how I met Martin, my husband! He took me to the time trial and very soon we became good friends.”

Annerien’s first road race was a half marathon in 2003, which she finished in 90 minutes. In 2004 she ran the Two Oceans Ultra with Martin but quickly realised long distance is not for her! “I had to walk often and realised the long stuff was not for me. I decided to stick to 10km and 21km races,” says Annerien, who works in the medical research field.

THE ROAD TO SUCCESS
Annerien slowly started racing more and in 2005 she joined a training group under the watchful eye of Dion Saayman, a coach from Centurion. “I knew I was a bit faster than the average runner, but never really thought of myself as very fast. Initially, when I trained with Dion’s group, I used to trail behind and finish last! It took me about three years before I started to shine and win races.”

2009 was Annerien’s year. She won her first SA Half Marathon title and in the same year she ran her half marathon PB in Birmingham. She also met her current Kenyan coach, Dan Muchoki. “I decided to join Dan’s training programme as he specialises in marathon training and I would love to run the Olympic marathon in 2012. I am still very good friends with my old coach, Dion.”

DISSAPPOINTING TIMES
In January last year Annerien picked up an injury that set her back six months, but in July she was back on track and began training for a possible overseas marathon. “The problem with invitations to international marathons is that you need to have a marathon CV with some good times. Luckily coach Dan knows a lot of people and I got an entry into the Singapore marathon. Everyone said running conditions in Singapore are very hard, as it is hot and humid. I prayed and realised that anything is possible through God, so I went for it!”

Annerien’s husband, Martin, accompanies her to all her races. “If he is not there, it is as if something is missing. We always joke and say we are a package deal! He supports me in everything and takes all the organisation and details out of my hands. I don’t need to worry about anything!”

SINGAPORE SENSATION
Annerien admits to being very nervous before her first marathon. “I saw all these girls who have run 2:25 marathons and have six packs of note! And there I was: tall and lanky! I tried to stay calm and soak in the atmosphere, which was great.”

Little did Annerien know that she was going to have one of the greatest races of her life. She initially stuck to the leading bunch but then remembered her coach’s advice that a race does not get won in the middle part but definitely towards the end. “The pace got too fast and I backed off a little. That was probably the best thing I could have done. At the 21km mark I started catching up and caught one after the other.”

At the 38km mark she saw the leader about 200m ahead of her. “She started looking back and running faster so I could not catch her. Then about 100m from the finish the third placed runner was right behind me. We started sprinting, but I laughed because I knew I can’t sprint. She finished just ahead of me!” Despite this Annerien had the race of her life; the leader finished only 10sec ahead of her. “The prize-giving was fantastic. It felt like the Olympics! We got flowers and each one got one of those huge cheques! Then we had interviews with the media. It was a fantastic experience.”

TRAINING
A unique aspect of Annerien’s training is that she never does the same session twice. “Coach Dan looks at each athlete and adapts the programme accordingly. The only hard and fast rule is that you have to do one speed and one hill session a week. Sometimes I train once a day and sometimes twice; mostly on my own and sometimes with Coach Dan at the High Performance Centre in Pretoria. Sometimes it is hard to train alone, but whether you train in a group or alone, at the end of the day it is you and the watch,” says Annerien, who averages between 120 and 140km a week.

She believes in training wisely and never pushes her body when injured or tired. “I have learnt to listen to my body. Sometimes athletes are too hard on themselves and too focused. I have learnt that any training programme is flexible. Sometimes your coach wants you to run 20km, but your body says you can’t. That’s when you rather listen to your body; missing 10km will not have an influence on your fitness! Sometimes we believe running should be very structured, and actually it’s not!”

THE ROAD AHEAD
Annerien is currently concentrating on preparing for the African Cross-Country Championships in Cape Town before leaving for the IAAF World Cross-Country Championships in Spain. “I love cross-country because it is not about the fastest runner; it is about the one with the most strength and endurance. My goal is to finish in at least the top 20 at the Worlds in Spain.” Another marathon is also on the cards soon, most likely in May, says Annerien.

She admits to being very competitive, but adds that she does not focus on her competitors’ training programmes or racing methods. Her favourite distance is the half marathon, but she would love to run a 2:29 marathon.

“Running will always be a part of my future. Sometimes I get tired of it, but when I don’t run for a day or two I am already missing it! My biggest dream right now is to not only compete at the Olympics next year, but to be right up front there with the top competitors.”

“You can have loads of goals and talent but you still have to work hard and be determined. It’s not always nice, but it is a small price to pay for that moment of glory when it all comes together at a race. Running is a tough sport and my faith is very important to me. I believe that with God at my side, I am capable of anything.”