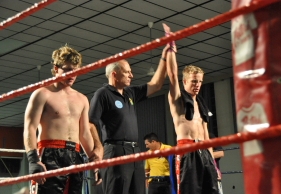 Boys will always be boys, and with David it was no different. As a 15-year-old scholar at Queensburgh Boys’ High School in KwaZulu-Natal, he took up kickboxing to make sure if needs be, he would be able to defend himself when his mates started playing rough. That was 11 years ago and over time, David’s goals have developed to be less defensive and more competitive. Last year, he was crowned South African champion in K1 kickboxing – that means contact with low kicks and knees – and now David has his sights set on the World Kickboxing Championships later this year.

His commitment to the sport earned him three bronze medals at the SA Championships in the last six years, but then last year he stepped it up to claim a gold medal. Growing up in KZN, he represented the province at three national championships from 2005 to 2007 before moving to Johannesburg where, under the watchful eye of coach Shihan Raymond Philips, he trains at Xtreme Kickboxing Technologies.

A RUNNING FIGHTER
His fitness levels through running have played a major role in transforming him from a teenage novice kickboxer to one of the best in the country. “I attend kickboxing classes three times a week for two hours at a time, with extra training closer to big tournaments. I run two to three times a week, but with the hectic pace of living in Johannesburg, I have not found time to join a running club. I rather choose to grab my running shoes after work or early mornings and just hit the road, usually for a run of about eight to 15km,” says Dave.

He adds that his mom is the ‘real’ runner in the family. “I never really got what she was doing until I started running early in 2009, initially to improve my fighting fitness. I now enjoy it so much because it is a great way to relax and de-stress. I haven’t officially run any races, though I sometimes tag along with my mom when she does races.”

Dave believes that incorporating running in his training regime has contributed to his success as a kickboxer. “Unfortunately, South Africa is not on the same path as the rest of the world when it comes to technique and fitness in the sport of kickboxing. We only concentrate on brawling with very little focus on skill or the fitness needed to apply the skill,” He says. “Very often, the difference between me and another fighter is my fitness level. Although running won’t improve my punching power, it definitely leaves me standing comfortably after three rounds in the ring while my opponent is about to collapse. Running is the quickest and easiest way to improve my core fitness. It has improved my fighting, without a doubt.”

He believes talent is important in any sport, but a winning attitude is more important. “When doubt enters a talented fighter’s mind, talent might mean very little. I class myself as a fighter with more determination than talent.”

THE FUTURE
Having been crowned South African champ last year, David now has his sights set on the nationals next year in the Western Cape, and after that he hopes to travel to the World Championships to represent South Africa. However, as with most sports, the trip is expensive and finding sponsors is a big challenge. David has thus already started scouting around for sponsors. He also leans heavily on the support of family and friends, because “They keep my passion burning, which in turn helps me make it to training sessions that I might have missed due to laziness.”

And one day, when the world of competitive fighting is just a faded memory, Dave has another goal in mind: to tackle the Comrades Marathon. “Just to say I’ve done it!” he says.