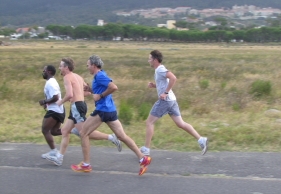 Sitting right below the slopes of the iconic Table Mountain, the Rondebosch Common makes an ideal place to go for a training run. The Common itself is popular for exercising dogs but can be hazardous for running due to holes created by moles. However, the streets running round the five-sided open piece of land are well-lit and used by many runners, so it’s a relatively safe place to run – and the venue for the fast and flat weekly Celtic Harriers time trial. The Common is a National Monument and an important conservation area for Cape Flats Sand Fynbos. In the 1700s and 1800s, the Common was used as a military camp, hence the name of Camp Ground Road, which borders the Common on the west.

Running clockwise around the Common, the circular time trial route starts and finishes at The Rock at the south-western corner (bottom left on the map), at the corner of Campground and Park Roads. Running up Campground, which becomes Sawkins, you then turn right into Klipfontein, then right into Milner Road for the back stretch, finishing by turning back into Park for the homestretch. Runners can do one lap for a 2.5km or two laps for a standard 5km, and water and toilets are available at the local garages.

The time trial takes place every Wednesday except between Christmas and New Year. There is no cost to participate and non-Celtic members are welcome to join. There is a lucky draw most weeks, and once a month the big shoe draw for a pair of PUMA running shoes takes place. Results are sent to the various weekend newspapers and also published on the Celtics website.

DIFFICULTY RATING: 1 out of 5