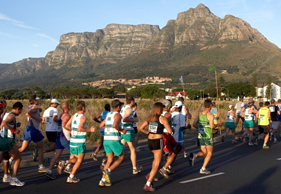 This was the first time I was running Landmarks. Unfortunately, last year I pro-lapsed a disc while carrying a bag of cement and was forced to sit out. I arrived at the start/finish area early (4:45am) to help erect the club gazebo and I was immediately impressed by the quality of the grass. I am sure all the golfing runners wished they had brought their clubs to smash a few balls off this magnificent carpet. A special area around the finish chute had been allocated to club gazebos and Atlantic was one of the first to have their gazebos up.

I made my way over to the registration hall, which was well laid out and adequately staffed. I had pre-entered and was delighted to be handed a pair of socks when I collected my race number. Most people enjoy freebies and the socks went down particularly well. Getting to the start early definitely has its perks – no queues and first grab at the handouts. I headed back to the gazebo to rub Vaseline in those awkward places and wait for the start.

PERFECT CONDITIONS
The race got underway on time and as runners made their way into the Rondebosch suburbs, it was pretty clear that Cape Town had dished up superb weather conditions – blue skies and not a breath of wind. The route took us towards Red Cross Children’s Hospital and then back towards Rosebank, past the Rondebosch Common. The going was pretty easy at this stage and it was clear that the 6am start was reaping benefits, as potentially busy intersections were still quiet. Even the Saturday night tequila drinkers were enjoying themselves.

We crossed over Main Road where the marshals had stacked several SAB trucks. One or two runners started reminiscing about the time one of these trucks overturned near the Riverside Centre and dropped its load of the amber nectar onto the street, and those who should have been at lectures were instead filling every space conceivable in their Toyota Conquests. I am sure the tequila boys had flashbacks to the previous night when they got their first sight of the SAB tailback.

We passed Kilindini and Kopano UCT residences before hitting the first hill for the morning, which took us past Mostert’s Mill and up to the UCT main campus. We had covered 7km at this point and the breathing had gotten heavier. There were a few rumblings before the race about the ‘beast’ of an uphill which took us up to Rhodes Memorial. After the 8km mark, the revered monster brought many legs to a halt, but it was inspiring to see the frontrunners come steaming down the hill, already with an extra 4km in the bag. It was warming to see so many runners greeting and encouraging other members from their clubs going in the opposite direction, and it is this camaraderie that inspires so many of us to run.

HEADING HOME
From the top of Rhodes Memorial, it was basically downhill or flat to the end. We skirted around Newlands Forest and followed the road through the suburbs, past Barristers and SACS until we reached the hallowed turf of Newlands Rugby Ground. It brought back emotions and memories of the previous day’s Bok clash with the Irish. With just 4km to go, I was feeling particularly strong and the scent of malted barley from the nearby brewery was enough to put a thirst in the mouths, even of the tequila boys. The final stretch of the route took us past Sahara Park Newlands Cricket Ground and Rondebosch Boys High School.

I crossed the finish line and headed to the club gazebo, where my clubmates had already started devouring the impressive spread of drinks and snacks so kindly provided by our members. We all chilled on the magnificent lawn and waited for the prize-giving, where two Atlantic members won lucky draw prizes to conclude a most enjoyable Sunday morning experience. A great route, some great weather and a very well organised race definitely contributed to a fine experience. I was particularly impressed with the marshalling and the spirit at the water stations. Chet Sainsbury and his team did a fantastic job in putting together the 2010 Landmarks.