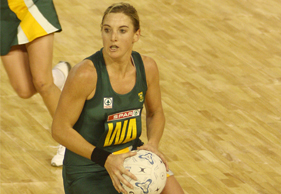 You’d have to forgive Liezel Wium for saying the recent 2010 Commonwealth Games in India are a disappointing memory, despite the Spar SA team winning three of their five pool matches and finishing sixth overall to improve on the seventh position they achieved at the 2006 Melbourne Games. Liezel tore her calf muscle in training a few days before the first match and after intensive physio and rehab, she was finally passed fit to play in the last pool match, but soon after coming on, her calf went again, and that was the end of her tournament. “When we got on the plane to come home, it really hit me that I only played 10 minutes – after preparing for the Games for three years. It was a big disappointment, but that’s the ups and owns of sport,” says Liezel.

Liezel (34) has captained the national team since 2008, having also captained the under-21 team. She currently has 61 caps, 16 of them as captain, and plays in the centre or wing attack positions, which means that she does the most running on court, to link the attacking and defensive halves of the team. “Luckily, I quite enjoy running, so I do extra training runs on top of my weekly 2.4km time trial. In season, I never go longer than 6km, but in off-season I do up to 10km. I like to go up the Bergpad trail in Stellenbosch, and I like to have a running partner, so some of the girls I play with join me, especially my Boland and SA teammate Christine Markgraaf, who also lives in Stellenbosch. We also do intervals and speedwork, and that is complimented by plyometrics and strength work as well as ball skills and vision training.”

THROUGH THE RANKS
Liezel started playing netball when she was six and in high school won her first provincial colours, for the Boland Schools team. She progressed into the Boland under-21 team, and was then selected for the national under-21 team for the 1996 Under-21 World Cup in Canada and the 1997 under-21 African Games in Namibia. She was selected for the senior national team in 2000 and played in the 2002 Commonwealth Games in England and the 2003 World Champs in Jamaica.

In 2004 she moved to New Zealand, having been approached by a talent scout while touring there with the national team in 2002. “At that time the Kiwi league was the strongest in the world, alongside Australia, so I grabbed the opportunity to take my netball further. I was signed by the Waikato Bay of Plenty franchise, one of the top four teams, and also had a season with the Wellington Shakers. I initially went for six months, but ended up staying nearly four years. My game improved a lot and I enjoyed living there, but eventually I wanted to come back to be closer to my family and friends.”

Liezel initially resettled in Kimberly, having accepted a post as netball co-ordinator and coach at Northern Cape High School, and played for the Griqualand West provincial team. Then in early 2009 she became Sport Organiser at DF Malan High School in Bellville in the Cape and was able to move back to Stellenbosch. At the end of 2010 she will embark on a new career, becoming a Pilates instructor and personal trainer at the Eden Gym in Stellenbosch, but will still be coaching netball. “I enjoy working with kids, helping to develop their potential,” she says.

LOOKING AHEAD
The next big tournament for the national team will be the 2011 World Champs in Singapore. “We finished fifth in 2003 and sixth in 2007, and it is my dream to see us back in the top five of the world. Australia, New Zealand, England and Jamaica are the traditional powerhouse teams, and I think we can be there too,” says Liezel.

While netball remains Liezel’s priority, she has already set herself a post-netball goal. Having done a few running races in South Africa, she took up cycling and sprint triathlons in her off-season in New Zealand. “Everyone there does multisport events, so I bought a bike and joined my friends. I’d like to do a Half Ironman and get into adventure racing when I stop playing netball, but I haven’t set a date for retiring yet. I want to finish on a high, hopefully with a World Champs medal.”