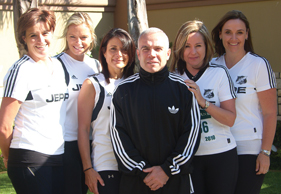 What do you do when you are about to hit 40, your jeans are a bit too tight for comfort and your lungs are complaining every time you climb the stairs? You make a vow to go run the New York Marathon with a group of girlfriends, of course! This is the story of how a group of women who have never run before, changed their lives and transformed themselves into super-fit runners who in the next couple of weeks will be off to the Big Apple to run one of the world’s coolest marathons. – BY MICHELLE PIETERS

Like with many decisions taken by women, it all started about a year ago at a women’s breakfast… Debbie Teixeira had just turned 39 and was having breakfast with friends Lana Lapin, Samantha Saffy, Michele Brookes and Joanne Kavanagh. Joanne was the only super-fit mom amongst them and was chatting away about how fabulous the New York Marathon was.

“While listening I decided I wanted to celebrate my 40th birthday the following year by running the New York Marathon!” says Debbie. The friends started chatting and got so excited about the possible trip that Debbie and Lana drove straight from the breakfast venue to a local sport shop in Bedfordview, where each bought their very first pair of running shoes! “In retrospect, we didn’t even think about it logically. We just acted on what felt right!” The life-changing decision was made on a Saturday and the girls vowed to start training on the Tuesday.

COACH DECLAN
Joanne in the meantime roped in her husband, Declan to train the ladies, and today Declan admits that the training probably helped him more than the women! “My darling wife had had enough of me. I was becoming a cranky, stressed out and fat middle-aged man! I was going through a difficult stage in terms of my business and I really needed to get back on the road. Joanne came home one morning last year and said: ‘Right, that’s enough. There are a group of girls who need a coach for the New York Marathon and it’s you!’”

Three days after the big decision Debbie, Lana, Samantha, and Michele turned up at 5am for their first training session. Joanne, an experienced Comrades runner, was there to motivate and train with her friends while Declan was ready to not only coach the ladies, but to also change his own life in the process. Everyone had their own reasons for making the commitment.

“I was partying a little too much and had started smoking again after quitting for seven years. I was feeling unhealthy and disappointed for starting to smoke again,” says Debbie. Lana, who also smoked, says she had to clean up her act while Michele wanted to tick the New York Marathon off her ‘Bucket List!’ Samantha wanted to do something entirely out of her comfort zone, and adds that “I also wanted to start exercising again after having had a baby.”

The fact that Debbie, Lana and Samantha lived on the same street and could train together was a huge bonus. They all travelled together to the local running club, which meant no excuses to switch off the alarm and go back to sleep! Of course, the idea of travelling to New York a year later with a bunch of girlfriends was the cherry on top!

ONE STEP AT A TIME
Initially they started with three runs a week of about 15-20 minutes and everybody admits to doing a lot of walking! One day Coach Declan put his foot down and told the girls that walking would not be allowed anymore. It obviously paid off, because the girls soon ran their first 10km at the end of last year, despite the fact that Declan coerced them into it by vowing the distance was only 5km!

A half marathon soon followed. “It was such a big thing. My family was there and I was bawling my eyes out when I reached the finish,” says Lana. The group continued to slowly build up their running distance, and recently they clocked a 90km training week! In the process, the smokers have stopped, all have lost weight, and look and feel younger!

It’s not just the girls who have got fitter and changed their lives. Declan admits that the training might have done him more good than the women. “The girls have honestly helped me more than I have helped them! These wonderful ladies have helped me through a most difficult and challenging period in my business life. They have rekindled my passion and commitment to running. I have never laughed and enjoyed myself so much on training runs. Their enthusiasm, commitment and dedication to reach their goal really inspired and motivated me. I am grateful to both them and my wife. At the same time I have lost 11kg and the last time I felt as strong was probably during my rugby or army days,” says Declan.

LIFELONG FRIENDS, LIFELONG HEALTH
The friends all made major lifestyle changes on their journey. “When I started running I needed early nights and definitely had to stay away from wine the night before. It was tough to turn down social invitations and hit the sack at 8pm, but it was worth it. I wanted to eat better so I could run better, and I stopped smoking. The feeling of seeing how your body improves and your running goals are met was inspiring,” says Debbie.

She was motivated by the awesome group of people she trained with and has the greatest respect for Declan. “Here was this guy who just got up one morning to take a bunch of moaning women for a run, and trust me, we moaned! I don’t think he realised what he had got himself into. He encouraged and motivated us right from the start. He was tough when he needed to be, and then understanding and encouraging when called for. What a wonderful person! We also owe a lot to Joanne, who has been there with us every step of the way.”

Samantha says she has gained mostly confidence from running. “My body feels healthier and stronger and I am a happier and less stressed person, with a more positive outlook on life. The experience up to now has been life-changing. I feel very emotional when I think how far we have come, from barely being able to run 5km!”

NO STOPPING THEM NOW!
The women leave for New York on 4 November, the day Debbie turns 40! “We will have to celebrate after the marathon on 7 November,” says Joanne. They will all run in the same outfits and plan to finish in sub-4:30. “We want to enjoy it and take a lot of photos!” And what will they be doing afterwards? Party, party, party… and of course, lots of shopping!

That is not where the journey ends, though. When they get back, Declan will be waiting, because he and his girls have another goal in mind… the Two Oceans Marathon next year!