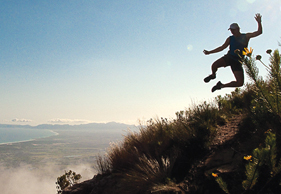 Owen Middleton is one of South Africa’s most innovative running event organisers, having come up with the hugely successful Trail Series events that have taken Cape Town and Johannesburg/Pretoria by storm over the past three years, and introduced many ‘road warriors’ to he delights of trail running. – BY SEAN FALCONER

Trail running is growing ever more popular as more runners want to leave the tar and take to the trails, for the softer surfaces, better scenery and to experience the wonderful nature that SA is blessed with, to get away from traffic and the hazards of running on the roads, or just to try something new after years of running on the roads. As a result, more event organisers are getting into trail racing and there are more events on the calendar each year, from short entry-level races designed to bring new runners on to the trails, to multi-day stage races that require serious training, equipment and experience.

One of the event organisers at the forefront of the entry-level trail racing scene is Owen Middleton of Cape Town, a professional photographer whose second company is responsible for the Cape Trail Series, Gauteng Trail Series and the three-day Wild Run on the East Coast. He’s an avid trail runner himself, and brings much experience and passion for trail running to the job.

RAISED ON THE TRAILS
Owen says his dad was involved in orienteering and other off-road running events, so he grew up on trails. “I got into running at school and did my first 10km at 17, in about 39 minutes. I was more into orienteering, though, and when I went to study conservation in George, I really got into it there. We spent a lot of time training, and much less time studying!” In 1997 Owen was selected for the SA team for the Orienteering World Champs in Norway, and after that he got into Adventure Racing, where his navigation skills saw him appointed as team navigator for his four-man team. “We spent a lot of time in the mountains, so my trail skills also improved, and we did a lot of trail running events as well. At that time, not many people were involved in trail running, and I was strong and my technical ability was good, so I did well.”

Owen actually ran his first conventional road marathons in 2010, having done two Sky Run 100km races, two Royal Raids in Mauritius, the Three Peaks Challenge, and the Odyssey. I ran the Red Hill Marathon in January and clocked 3:34, then tried to beat that time at the Peninsula Marathon in February, but we had a horrible 25-knot headwind and I just died! Then I ran the Two Oceans Marathon in March, where I died again! I had always wanted to run Oceans, and now I can call myself a real runner,” he laughs.

At the time of writing Owen was participating in the Augrabies 100-miler trail race. He boasts PBs of 36 minutes for 10km, 1:33 for the half marathon and of course that 3:34 marathon time, but he says he was built for trail running. “Put me on a trail for two days and I’m fine, but on the road I get slower the longer I run. I’m just not used to the tar.”

ORGANISATIONAL SWITCH
Owen has been involved with event organising since 2002, having worked on the Land Rover G4 Spirit of Adventure, Montagu M3 Festival, Land Rover G4 Waterfront Rush and the Petzl Adventure Nights. In 2007, he felt there was a gap for shorter races to bring more people into trail running. “Basically, your shortest choices for trail races seemed to be 36km or longer, so I came up with the concept of a series of short-distance events, held one week apart in different venues, with a short 5-8km course and a medium length 10-15km course, all on well marked trail routes with a mixture of jeep track and single track. I took it to Montrail and Cape Storm, my own sponsors, and they loved it, so we started with the Cape Summer Series in early 2008 and it was an instant hit. Salomon later took Montrail’s place, and they’re still the series sponsors in 2010.”

And it’s quite a team effort, too, with Owen’s girlfriend of seven years, Tamryn Jupp, a central part of the organising team. “With the first series in 2008, I had set it all up, but realised I didn’t have enough time to do everything, so Tam got involved in the registration, and she’s the been the admin and timing person ever since, because she’s absolutely brilliant at that. I do the operational side of things. We have our moments, like any partnership, but generally it works great. She is absolutely fundamental to the events.”

Owen’s trail races have proven highly popular and he puts this down to the fact that they are so accessible. “We hit a nerve with the local runners, with between 40 and 50% of the participants being new to trail running, most of them coming from road running. The series was started with the idea to keep it short and accessible, so we marked out the courses and no navigation was needed, but the runners still had to do the basics of trail running, like carrying their own water. Because it was so successful in Cape Town, the sponsors said we should take it national, and thanks to my orienteering experience up in Gauteng, I already knew of some great venues and trails. Still, cracking the Joburg market was tough. Only 80 runners on average per event turned up in 2008, but it grew quickly and now we’re seeing a lot more trail events starting up in that area.”

“That whole first year was tough, actually, because I was shuffling between photographic commitments and the trail series, and we put on 17 races in total that year, across four series. But the success really grew from there. In 2008 we had a total of 2300 unique runners across the various races. In 2009 that figure jumped to 4200, and in 2010 we’ve had over 5000. Next year we’ll be launching a KwaZulu-Natal series as well.”

GOING LONG
At the end of 2008, Owen decided to add another event to his stable. “I had this idea to do a run on the Transkei Wild Coast, because I had done a bike ride there but thought it was better running country.” What came out of that was a 112km three-day run along arguably the most scenic coastline in SA, starting roughly 80km north of East London and finishing at the famous Hole-in-the-Wall.

The inaugural 2009 Wild Run immediately sold out, with 73 runners booking their race entries and a place in the fully booked hotel. “The idea was for the first year to be a trial run, but it ran so beautifully that we faced the dilemma in 2010 whether to take more people by adding tents in the hotel grounds. We chatted to the runners and their feedback was that it was a very personal event, where they didn’t have to fight for space with other runners. All of them said don’t make it bigger.”

FUTURE OF TRAIL
When asked where he sees trail running going in South Africa, Owen says he has mixed feelings on the topic. “More guys are jumping on the bandwagon and starting new events, but many are still in the proverbial ‘backyard’ of the cities. Real trail running is about exploring, so we’ll still have the exclusive icon events that people really aspire to run. However, exclusivity comes with a price, but as long as we’re providing value to the runner, I think it is justified. Organising these events is very expensive, including venue hire costs, permit costs and fees to access land, and runners need to be educated that trail running is expensive. Still, trail running has a lifestyle around it, and because events like ours are family-friendly and held on private game farms, and include food and drinks, a jumping castle for the kids, etc, more people are bringing their families to the events.”

Owen and Tam also put on the XL Trail Series, consisting of three 21-27km races spread out through the year, offering the ideal way to step up to longer trail races. “I just love organising events, especially when I can get people that have been road running for 15 years to get totally beside themselves with excitement after just one trail run – especially in Joburg, where everything is road, club and Comrades orientated. When they come run events in the wildlife, just 40 minutes away from their door, they love it, and it’s very satisfying for me.”


SIGN UP FOR THE TRAIL SERIES
Owen’s Trail Series events, partnered by Capestorm and Salomon, start each year with the Cape Summer Series in January, then the Gauteng Winter Series in June. The Cape Winter Series follows in July/August and the year is rounded off by the Gauteng Summer Series in October/November. You can enter just one event per series, but run four out of five or three out of four in a series and you will compete for series championship awards as well. Every series entrant gets a R50 Capestorm voucher. Just be warned that entries sell out quickly, so you have to be quick! The next race in the Gauteng Summer Series is at the Pelindaba Nature Reserve on 7 November followed by last leg at the Segwati Private Game Reserve on 28 November. Go to www.trailseries.co.za for more info.

Trail running is fun and definitely something everyone should try! Craig Murphy, a novice Gauteng trail runner, shares some light hearted pointers on trail running for the uninitiated (like himself)!
•    Don’t wear club colours. You will look like a dork and people will stare.
•    Don’t even wear licence numbers. Trail running is sort of an underground thing, a type of running sub-culture.
•    Don’t expect a gun or anything similar at the start. They just sort of count back from 5!
•    Don’t run with your watch beeping after every kilometre. After all, it’s about the experience and not the distance.
•    Don’t run ahead, stop, take pictures and then run past again. Trail runners don’t like that!
•    Do make sure the bladder in your hydration pack is working.
•    Don’t become so obsessed with your footing that you miss the branch above your head. Trust me this can hurt.

“Seriously though, I did enjoy my first trail run at the Groenkloof Nature Reserve in Pretoria. As you would expect I broke all of the above rules (except wearing club colours and licence numbers as I was forewarned).”